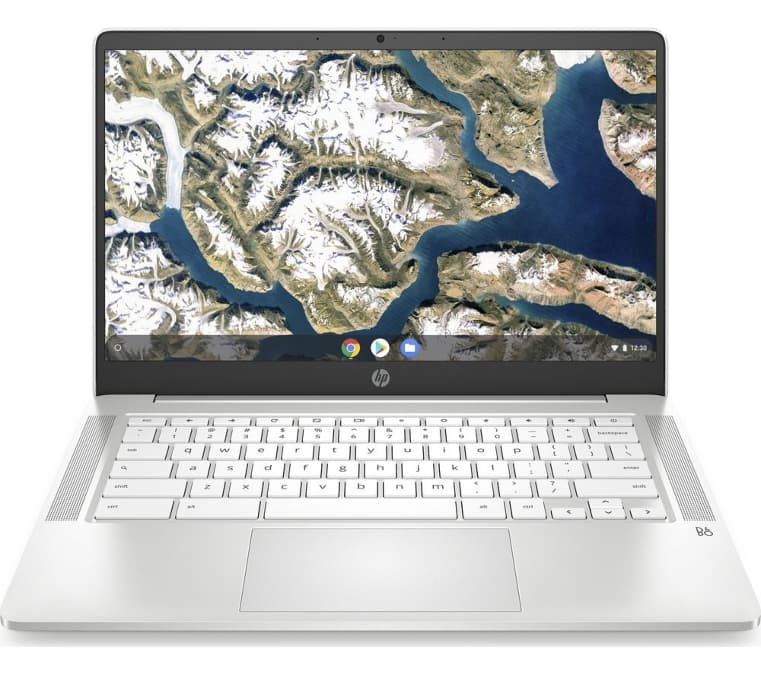 The HP 14a Chromebook is a budget range of laptops from one of the biggest Chromebook manufacturers. In fact, HP was the biggest selling Chromebook manufacturer in the last quarter of 2020. They’ve been manufacturing laptops long before the Chromebook was on the scene, so it’s fair to say they know their stuff. Although this is a budget laptop it offers pretty decent specs when it comes to the display. The display is arguably one of the most important things to consider when buying a laptop. So it’s good to see HP has got it right.

The HP 14a Chromebook is available in two configurations and is aimed at the budget market. The Intel Celeron N4020 processor is what you’d expect to see used in a budget laptop. It comes with 4GB of RAM, which is more than enough for doing most things when using Chrome OS. Also, you would not expect to see any more RAM used than 4GB when using this processor, so it all works well together.

When it comes to the storage you’re getting 64 GB of eMMC storage. eMMC storage is a budget type of storage, which is used on most Chromebooks. Only premium spec Chromebooks use SSD, so this is nothing to be concerned about. Even in 2021 64GB of storage is more than enough for most people. This will easily allow you to install plenty of Android apps and have space left over.

The processor is a dual-core with a base speed of 1.1 GHz and a turbo speed of 2.8 GHz. It also comes with 4MB of cache, which is used to help regular processes run faster. You’ll easily be able to use this Chromebook to surf the internet, use social media, stream HD movies, word processing and spreadsheets. You’ll also have no issue using Android Apps, however, some apps may take longer to load if they are gaming apps with intensive graphics.

The Intel Pentium model comes with the same amount of RAM and Storage as you get with the Intel Celeron model. It’s a much quicker laptop though because instead of two cores it uses four cores. These cores run at a basic clock speed of 1.1 GHz and a turbo speed of 3.1 GHz. If you’re after a budget Chromebook with a little extra power then the Intel Pentium Silver configuration may be the right choice for you.

The HP 14a Chromebook comes with a 14-inch display. What is really nice to see is that HP has opted for a Full HD resolution of 1,920 by 1,080. This is the resolution you’d want to see on a laptop with a 14-inch panel. A lot of budget Chromebooks with the same size of display do not offer Full HD, so it’s really good to see this on a laptop at this price.

It also comes with an IPS panel, which means viewing at an angle will not give a deterioration in image quality. An IPS panel also provides much better colour reproduction. I’m happy this Chromebook is not let down by the display. Something I’ve been wanting to see for a long time is budget Chromebooks, which offer a good high-quality Full HD display. Well done HP for this.

It’s a laptop only, which means it cannot be used as a tablet. Personally speaking, I don’t think this is a deal-breaker. Although Hybrid Chromebooks are good I’ve never got the feeling that you’re using a tablet. What is more important is whether it offers a touchscreen. This is because most Android Apps work better with a touchscreen. Personally speaking, if you’re looking to use Android Apps I’d avoid any Chromebook that isn’t a Hybrid or if it lacks touchscreen capability.

All Chromebooks come with an Automatic Update Expiry (AUE) date. Until this date is reached your Chromebook will receive regular updates to Chrome OS. These updates provide new functionality and improve the functionality Chrome OS already offers.

Another important feature of Chrome OS updates is security. Security updates allow you to surf the internet without having to worry. Once the AUE date has expired these updates will no longer take place. How much risk this exposes you to when surfing the internet is questionable.

Connectivity is something we tend to overlook when buying a new laptop. It’s important to make sure your laptop provides all the connectivity you need. The HP Chromebook 14a comes with one older type USB A port. This means you’ll have no issues connecting older peripherals to this laptop.

It also comes with two of the newer type USB Type-C ports. These ports offer much more than USB A because they can also be used to charge your device and to connect an external display. The 14a HP Chromebook also comes with a Micro SD Slot, so you can easily add further storage at a later date should you wish. The headphone jack will allow you to use wired headphones or if you prefer using wireless headphones this is possible thanks to the Bluetooth connectivity.