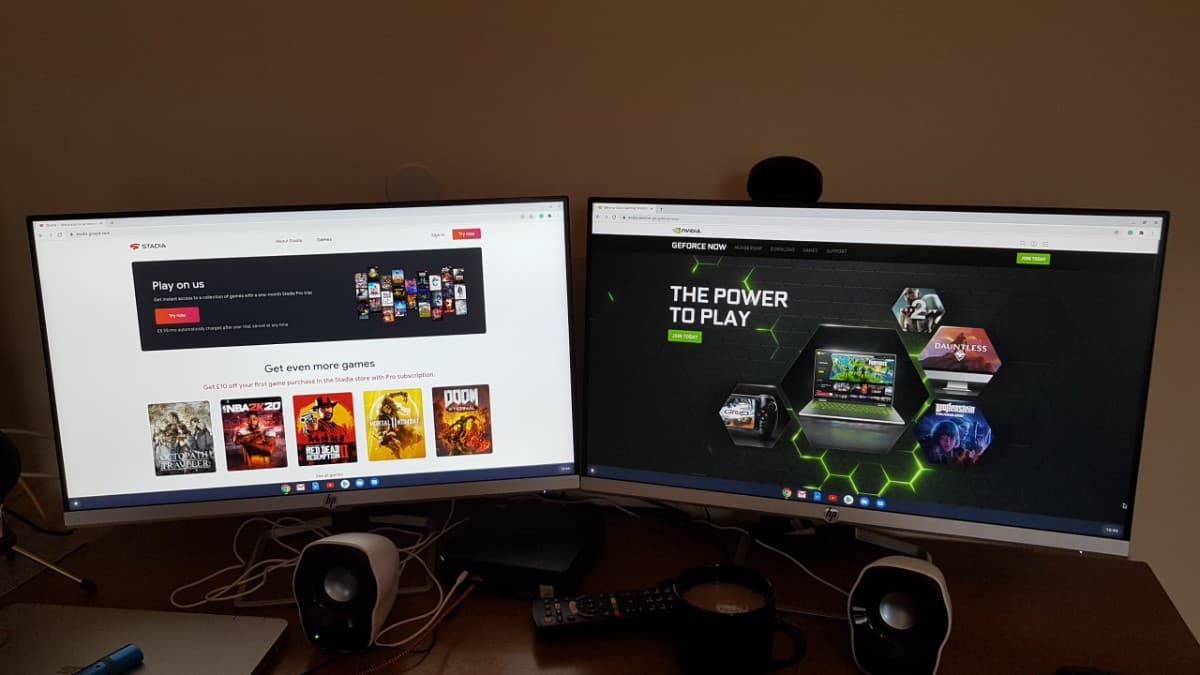 I’ve been a fan of gaming ever since I had an Atari ST when I was in my early teens. I tend to prefer strategy style games over console games, so for most of my gaming in the last twenty years I’ve been using a Microsoft Windows PC.

Now I’m no fan of Microsoft computers. They are annoyingly slow even if you have a good spec machine. So I was really thrilled when I heard about Nvidia GeForce Now because it means I can now play these type of games on my Chromebook. Yes, you heard that right; you can now play PC games on your Chromebook.

The best thing is it works really well. In fact, it works better on my Chromebook than it does on my Microsoft computer. Even playing a game on my budget Chromebook worked better.

GeForce Now comes with a catalogue of games you can play on your Chromebook. However, the best thing about the service is you can play games you’ve previously purchased on services such as Steam and Uplay.

Getting these games to work on GeForce Now is a really simple process. Not all games work, so the game developers had to opt in to making their games compatible with GeForce Now.

It’s not about trial and error though, so you don’t need to worry about that. You’ll simply notice some games you search for are just not available. However, some of my favourite games are available, so I’m sure you’ll find some you love to play.

The game streams directly from Nvidia servers, so your actual Chromebook does not deal with too much of the processing power. It uses a GeForce graphics card on their servers, so you can play games with advanced graphics without any issues.

There is a free option when using GeForce Now. I’d recommend trying that first, but if you like it. Then you’ll definitely want to opt for the paid subscription because it removes the limit of one hour of gaming only.

Another way to play games on your Chromebook is using the streaming service Stadia. This allows you to use controllers you already own from other consoles. If you don’t own any controllers you can buy controllers specifically made for Stadia.

Stadia offers a slightly different service to GeForce Now. You cannot play games you own from Steam, Uplay or other game providers. Instead, you pay a subscription fee and this gives you access to many different games to play.

There are some big titles as well such as Red Dead Redemption 2, Mortal Kombat and Hitman. These are games you’d usually play on a console, so Stadia is aimed more at console games rather than PC style strategy games.

I NO LONGER NEED MY WINDOWS PC

I’ve been desperately wanting to get rid of my Windows PC for a while now. I still use it for video editing, and this will continue for now. However, when it comes to playing games. I’ll never go back to my Windows PC.

Sure, some of the games I play are not available on GeForce Now. However, most of my favourite games are. The main reason why I’ll not be using my PC for gaming anymore is because I can play them better on my Chromebook.

Even though I have a powerful PC with a 6GB NVidia Graphics card. I regularly noticed my PC struggled to play games. This was playing games locally without any streaming involved.

I’m now playing the same game on my Chromebook and Chromebox and I’m not experiencing any of these issues. When you consider I’m streaming games over the internet. It surely shows the PC being needed for gaming is going to be a thing of the past.

I paid about £1,700 for my Windows PC and I can play games better on my budget Toshiba Chromebook, which cost about £299. That’s pretty shocking.

All the hassle of updating my Windows PC and how long it takes to boot always put me off playing games. I have found I prefer to use my Asus Chromebox 3 for gaming. This is because I can use a larger monitor and get more involved.

If I want to play a game now. Instead of being put off by the fact it will take my Microsoft Windows computer about half an hour to be ready. I simply turn on my Chromebox and it takes about two minutes to load the game.

I’m seeing a really bright future for gaming on Chrome OS. I hope both Stadia and GeForce Now are successful, as they both offer a slightly different service.