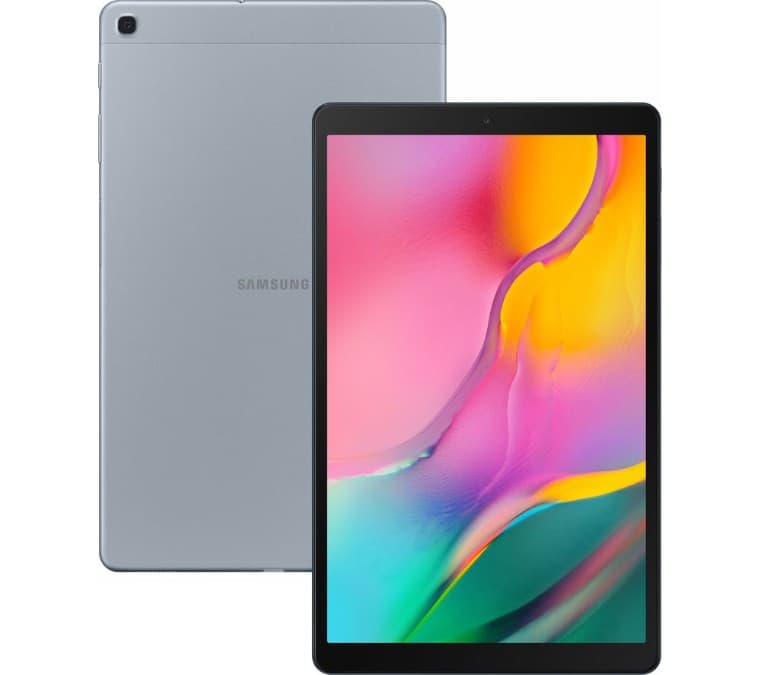 Samsung has been making tablets for many years and it shows. Generally speaking, I’d never say you should look for just one manufacturer when buying a new tablet. However, Samsung is known for making some of the best tablets you can buy.

Whether you’re looking for a budget tablet or a more expensive one. It’s very difficult to go wrong when buying Samsung. When it comes to tablets it is Samsung alone who takes on Apple.

The Samsung Galaxy Tab A is a budget tablet. However, you should not let the word budget put you off. The budget tablet market is huge, but very few make budget tablets as good as Samsung.

Sure, you can get cheaper budget tablets, but it’s unlikely they’ll be as well built as this tablet. This is what you get when you buy Samsung. They have made so many tablets over the years they know what sells. Decent build quality is something everyone wants and they get it right here with the Galaxy Tab A.

On the back of the tablet, Samsung has provided aluminium with a textured finish. This not only makes it look more expensive than it actually is, but it also means it feels really sturdy. In fact, I’d go as far to say you’ll not find another tablet at this price that looks as good.

At the top where the camera and antenna are located you get a strip of plastic, but this is the only plastic you’ll find. The reason for this is because it’s much easier for the antenna to transmit data through plastic than aluminium, so it’s for practical reasons rather than aesthetics.

When it comes to portability the Samsung Galaxy Tab A 10.1 is pretty lightweight at just 1.01lbs/460g. That’s pretty impressive when you consider this is a tablet offering a display of just over 10-inches. It’s pretty slim as well at just 7.7mm thick.

The processor in the Samsung Galaxy Tab A 2019 offers decent performance for the price point. You need to remember this is a budget tablet, so you cannot expect the performance to be amazing.

That being said, you can still easily play any of the Android Games you’ll find in the play store without any issues. Yes, the graphics will not be as good compared to more expensive tablets, but you get what you pay for.

It’s a dual-core Mali-G71, which isn’t the best considering the size of the display. However, you need to accept some compromises at a tablet costing as little as this one does.

When it comes to RAM well it’s a little let down with just 2GB available in the UK version. However, if you’re living in the USA you’ll be happy to know you can get it with more RAM.

Although you can use an Android tablet with 2GB of RAM perfectly fine. I’d say it is definitely the absolute minimum. Ideally, an Android Tablet in 2020 needs to come with 3GB of RAM. That extra 1GB really does help on the performance front. Find out more about how much RAM you need for an Android Tablet.

If you’re looking for an Android tablet for the basics like internet surfing then you’ll have no problem with the 2GB of RAM available. However, when it comes to playing Android Games; you’ll see extra RAM would have come in handy.

When it comes to the storage, again, it’s a little let down by just offering 32GB on the standard model. Although this isn’t too bad. It does mean you’ll be pretty limited on how many Android Apps you’ll be able to install.

Unfortunately similar to the RAM it all depends on where you live. In the UK only the 32GB is widely available. However, in the USA you can get 64GB or even 128GB of storage.

The display offers a pretty decent image for the price. Yes, it’s not offering AMOLED, but you shouldn’t even be thinking that would be a possibility in this price range.

When it comes to streaming videos on the likes of Netflix. You’ll be really happy with how the display performs. It also has the capability to stream in full HD at 1080p without any problems whatsoever.

You get two cameras on the Samsung Galaxy Tab A 10.1 2019 edition. This is pretty standard for most tablets. The front boasts a relatively modest 5-megapixel camera, which is ok for the price.

The rear camera is better and offers 8-megapixels. For the price of the tablet, I don’t think you can really complain about the cameras on offer. Sure, they’ll never compete with a high-end mobile phone, but I don’t think it would be reasonable to expect that.

Samsung state you can get a whopping 13 hours of battery life. This sounds pretty amazing for a budget tablet.

However, in reality, you’ll get a lot less than this. Especially if you spend most of your time streaming movies from Netflix. That being said, I think you can safely say 8 hours of battery is achievable, which is more than enough to watch a couple of movies.

If you spend most of your time internet surfing. Then you’ll get a little more from the battery. It’s a 6150mAh, which isn’t too bad at all.

If you’re after a budget tablet that looks the part then this is one you should definitely consider. The build quality is far superior to any other budget tablet in the price range.

If you’re living in the UK then you may be let down a little by the amount of RAM and storage. 2GB of RAM isn’t the best, but that doesn’t stop you playing most of the Android App games available in the play store.

The Graphics processor does mean graphics you’ll see on screen are not going to be able to compete against more expensive tablets. However, the games are still playable, so the compromise is accepting slightly lower settings on the graphics front.

In the USA you get better options, so I’d recommend opting for the 3GB RAM and 64GB storage option. This provides much better performance and that extra storage will come in handy if you want to install a lot of Android Apps.