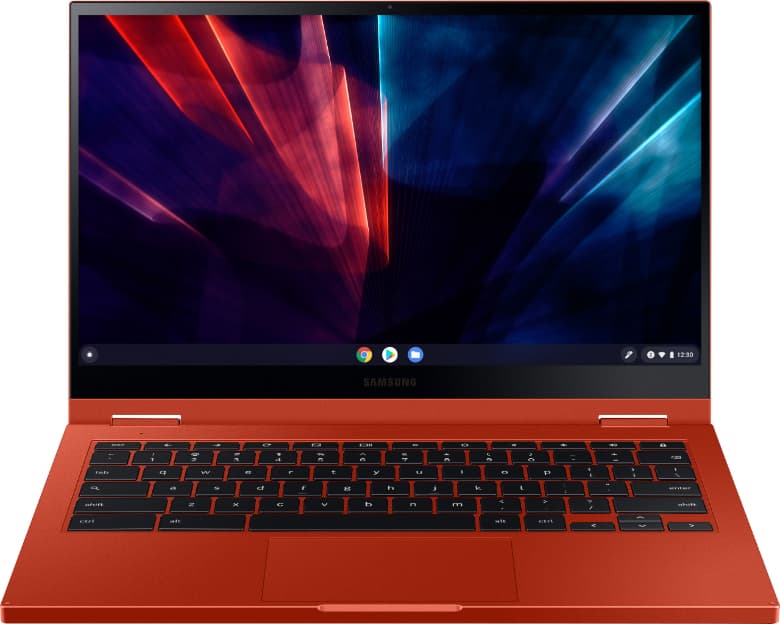 If you love all things Samsung then the Galaxy Chromebook 2 is a great choice. It’s available in Fiesta red, which was the striking colour that caught peoples attention with the original. If the red is a bit too much for you though. You can also get it with a grey chassis. It’s worth noting this Chromebook is only available in the USA.

The Samsung Chromebook Galaxy 2 is a laptop that will stand out from the crowd. It has an all-over aluminium chassis, which is what you’d expect at the price. The inside is plastic. Most medium-spec Chromebooks are all over aluminium. This helps to make the laptop look cool and sophisticated and you’ll have that feeling of a premium laptop when handling it.

It’s a Hybrid 2-in-1 Chromebook, which means the lid rotates allowing you to use it as a laptop or a tablet. Not all Hybrid 2-in-1 Chromebooks work as far as I’m concerned. For a 2-in-1 to feel right the body needs to be a solid block. Laptops with curves in tablet mode just feel and look awkward. You don’t get this problem with the Galaxy Chromebook 2, which is great to see. It weighs in at 2.71lbs, so it’s pretty lightweight.

You’ll not be disappointed with the performance of this laptop. The great thing about Chrome OS, which is the operating system used to run Chromebooks. Is that it’s really lightweight. Therefore, you don’t need to have a lot of processing power to get decent performance. The Galaxy 2 comes with an Intel i3 tenth-generation processor. There is now an Intel Celeron version of this laptop. This will offer a more basic performance and is more suitable for internet surfing, streaming movies, social media and most Android apps.

You’ll be able to do everything you can think of on this laptop. Whether that is the basics such as internet surfing and streaming movies. It will perform these tasks without any issues. Also, the more advanced tasks you’d use a Chromebook for such as Android apps and Linux Apps will work perfectly with the Intel i3 model. You’ll definitely not find yourself in a situation where this processor is going to cause you any issues.

When it comes to the RAM. There are two models available. One comes with 4 GB of RAM. This is more than enough to carry out the basics. In fact, even using Linux and Android apps will work just fine with this amount of RAM. However, if you would prefer to have a laptop with better performance. Then you’ll find the 8 GB model provides this. Having double the amount of RAM will work perfectly with this processor, and you’ll notice the difference. Find out how much RAM you need for your Chromebook.

You also get two options when choosing the amount of storage you’d prefer. I do like it when manufacturers offer more than one configuration. It stops you from spending more money than is necessary. You can either opt for 64 GB of storage or 128 GB of storage. Both storage options are pretty decent but how much you’ll need depends on what you’re buying a Chromebook for.

The 64 GB version will allow you to install plenty of Android apps. You could also install a few Linux apps without running out of space. The 128 GB version offers you a more future proof Chromebook. Having double the amount of storage will mean you don’t need to worry about running out of storage in the future. This is important if Android and Linux apps are something you’re really interested in.

You’ll not be disappointed with the display you get with this laptop. It offers a Full HD resolution of 1,920 by 1,080, which is all you need for a display of this size. The 13.3-inch QLED display helps to make this a nice compact laptop. Great for use on the move. The display has excellent views no matter what the angle, which is what you’d want to see at the price. Much better than cheaper laptops that offer a TN panel where the viewing angles are just awful.

As I’ve mentioned earlier this is a Hybrid Chromebook, which also means it comes with a touchscreen display. This is great for anyone who wants to use Android Apps. It has a 16:9 aspect ratio, which is the aspect ratio most Chromebooks offer. A 3:2 aspect ratio that you get on the Acer 713 is a better option if you’ll be buying this laptop for work. This is because you get more on the screen with a 3:2 aspect ratio compared to 16:9.

The connectivity on the Galaxy Chromebook 2 is fine, but it lacks an older USB Type-A port. Considering this Chromebook is thicker than the original Chromebook to make room for a bigger battery. It would have been nice to see a USB Type-A port. Having one of these ports means you can still use older peripherals than run using this port. If you have any of these you’ll need to use an adapter. They are pretty cheap, but it’s a hassle having to hunt them down when needed.

Instead, they have provided two USB Type-C ports. This is the newer USB type port and is definitely a huge improvement. These ports also allow you to charge your laptop and hook it up to an external display. A Micro SD slot is also available, which means you can add further storage to your Chromebook at a later date.

A combo headphone/mic jack is available, which means you can use a pair of wired headphones. If you’ve moved over to wireless then you’ll be fine because this laptop also offers Bluetooth.

Is this Chromebook for you?

There is no question about it this laptop looks the part. Sure, it may not be as cool looking as the original Samsung Chromebook. That being said, it still offers an all-over aluminium body, but the inside is plastic. The Intel i3 processor is more than capable of doing anything Chrome OS offers, so you’ll have no issues there. The Intel Celeron version is still capable but offers much slower performance. Possibly not ideal if you want to use Linux Apps and advanced Android apps.

The display on this laptop will not let you down. If you love a great display then you’ll be amazed at the visuals offered here. The battery life is also a big improvement on the original. You’ll easily get ten hours from this laptop without the need for a charge. You can take a look at the Samsung Galaxy i3 model at Best Buy.