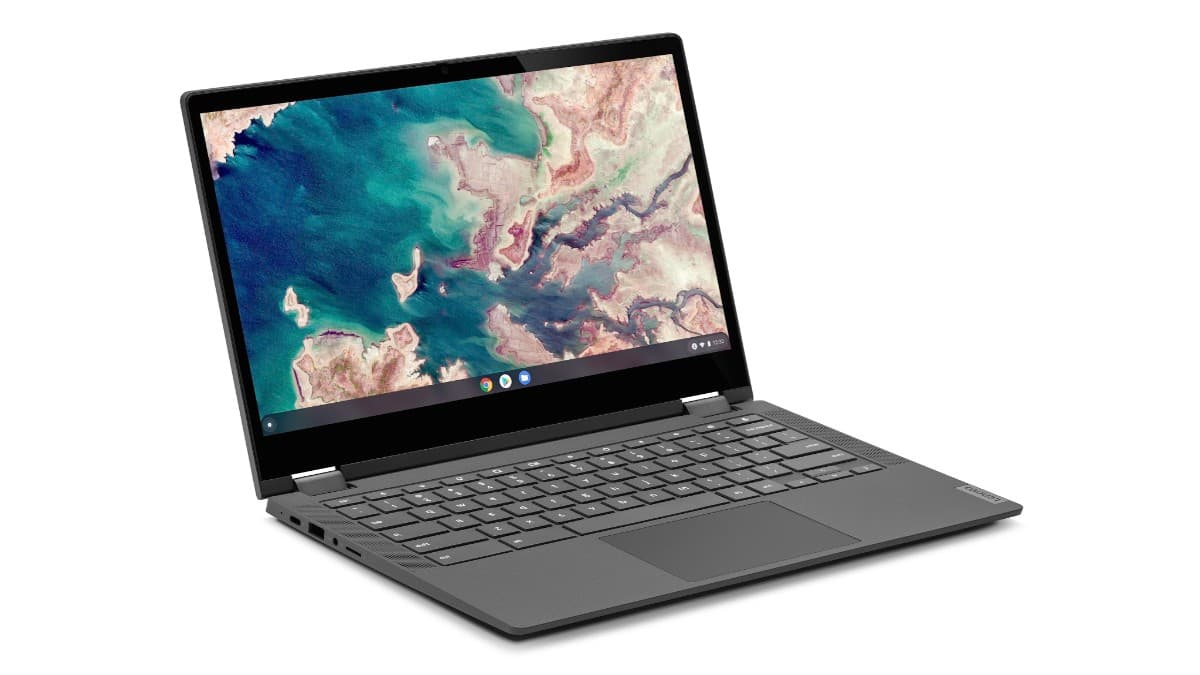 When it comes to Chromebooks Lenovo is a bit of a newcomer. You’d never know this when you look at how many Chrome OS devices they’ve released in the last couple of years. In fact, in quarter four of 2020, they were one of the manufacturers that helped Chromebook sales overall jump by a massive 287% compared to the same quarter in the previous year. Apart from HP, Lenovo sold more Chrome OS devices in 2020 than any other manufacturer. That’s pretty impressive for a manufacturer who wasn’t even in the Chromebook market a couple of years ago.

It shouldn’t be too much of a surprise though because Lenovo came along and totally shook the market. This is great news for the consumer because they’ve released some fantastic Chromebooks at very competitive prices. One of those is the Lenovo Ideapad Flex 5i.

The amount of RAM at 4GB is more than enough for most tasks. Whether you want to surf the internet, use social media, word process, use spreadsheets or use the latest Android Apps. Although 4GB of RAM is enough for all of these tasks. It’s a bit of a letdown because the Intel i3 processor can easily cope with double the amount of RAM. An Intel i3 this powerful with just 4GB of RAM feels like a bit of a wasted opportunity. When it comes to the storage you’re getting a huge amount at 128 GG, and they’ve opted for the more reliable SSD rather than the cheaper eMMC storage type.

The Intel i3 model can perform when you take a look at the processor alone. However, it lacks in the RAM department. The Intel i5 model uses a tenth-generation Intel i5 processor with a base clock speed of 1.6 GHz and a turbo speed of 4.2 GHz. You shouldn’t be comparing clock speeds between the i3 and i5 version though. This is because the Intel i5 uses a quad-core processor rather than a dual-core, which means four cores are running at that clock speed. So although at first glance the clock speed may look quicker on the i3 model. This isn’t the case when you consider the i5 model is running with double the number of cores.

It comes with 8GB of RAM, which is just what you’d expect to see as an absolute minimum for a processor of this type. Don’t get me wrong 8 GB of RAM is more than enough for what you’ll be using a Chrome OS device for. It’s just to point out anything less when it comes to an Intel i5 would be an absolute waste. The extra RAM and quad-core processing power will offer you excellent performance.

The storage is the same at 128GB, which is not an issue. When you consider you can install a huge number of Android Apps with this amount of storage. It’s definitely not going to be a problem either now or in six years from now.

The display size of 13.3-inches is a move from the standard typical size of 14-inches. I personally prefer the slightly smaller display because it provides a more compact laptop. Also, you’ll get crisper text because you’re still getting a Full HD resolution of 1,920 by 1,080. The IPS panel also means you’ll get much better colour reproduction compared to cheaper panels, and viewing at an angle will not compromise the quality of the image you’ll see even from an angle.

The Lenovo Ideapad Flex 5i Chromebook is a Hybrid device. This means you can use this as either a laptop or a tablet. Perfect for anyone not wanting to spend extra money on a separate tablet. The touchscreen also means you’ll be able to use all of the Android Apps without any issues.

All Chromebooks come with an Automatic Update Expiry Date. Until this date is reached you’ll receive updates of the Chrome OS operating system. These updates improve existing functionality already offered and new functionality to provide a better experience. They also include security updates, which will help to keep you safe when surfing the internet. This means you don’t need to worry about buying separate anti-virus software because this is not needed for a Chromebook if the AUE date has not expired.

The Lenovo Flex 5i comes with one older type USB port and two newer type C ports. This is good to see because it means you’ll not have any compatibility issues with your hardware. Whether you want to connect older peripherals, which support USB A or newer peripherals, which support USB Type C. You’ll be able to use either thanks to the laptop supporting both USB types. The newer type USB C can also be used to charge your device and connect an external display.

It comes with a backlit keyboard, which is good to see because it means you’ll be able to continue typing into the evening without any issues. You’ll be able to easily add further storage down the line if you wish thanks to the Micro SD slot. This allows you to use an SD card, which is relatively cheap to instantly add extra storage. The headphone jack and Bluetooth will also allow you to use a pair of wired or wireless headphones.

It’s always a good idea to consider a few reviews before buying a new laptop. This is because a review is the opinion of one person. By reading a few reviews you’ll be able to make your own opinion on whether the Chromebook is right for you before buying.