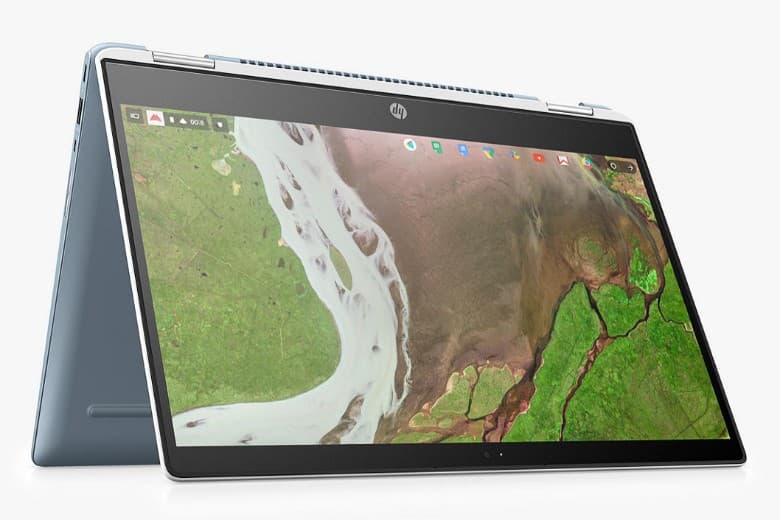 A couple of years ago we did not really have many Chromebooks to choose from. Yes, there were lots of Chromebooks on the market, but only a handful that was worthwhile spending your money on. Fast forward to 2019 and we have new Chromebooks being launched on a monthly basis. Best of all, these Chromebooks are not like anything we have seen before. The HP x 360 Chromebook is no exception to this, so let’s take a look at what it offers.

I’ve always liked the build quality of HP laptops and it’s great to see they stick to the same design when it comes to Chromebooks. The HP x 360 looks like any other laptop out there. A few years ago you could always spot a Chromebook compared to a traditional laptop. Chromebooks always looked a tad awkward, but thankfully this is no longer the case.

The HP x 360 Chromebook sports a glossy white lid with the HP logo at the centre. It also has a monochrome ‘Chrome’ logo to keep in line with the cool elegant feel that oozes from the HP x 360.

As you would expect from any Chromebook nowadays. The HP x 360 is a hybrid, so it can be used as a laptop or tablet. The hinges that allows the Chromebook to transform into a tablet look good and feel sturdy, so no complaints here.

The chassis takes up 13-inches and feels pretty compact when you consider it comes with a 14-inch display. The lid and inside is aluminium, which makes the HP x 360 feel more expensive than it actually is. However, it’s not an all over aluminium chassis, as underneath is plastic.

This is not an issue because you would only ever really notice this when carrying the Chromebook. Saying that though, it obviously does stop it looking as cool as some of the all aluminium Chromebooks that have been launched over the last twelve months.

It’s good to see that Chromebooks are slowly starting to move away from the Intel Celeron processor. This type of processor may have been fine before Android Apps and 2 in 1 touchscreen displays. However, today, a Chromebook needs more processing power.

The HP x 360 comes with an Intel i3 8th generation processor. The Intel i3 8130U Dual Core processor is capable of speeds ranging from 2.20 GHz to 3.40 GHz. This is more than enough for most of the applications you would want to use on a Chromebook. It also comes with 4MB cache to speed up regular processing tasks.

The HP x 360 does not let us down when it comes to memory either. The 8GB of RAM on offer together with the Intel i3 processor gives you a fast performing Chromebook.

This is great to see because it shows the manufacturers recognise we demand more from our Chromebooks. This is mainly due to Android Apps, which are more demanding than purely internet surfing.

This amount of RAM really makes a difference when using the HP x 360 Chromebook. The performance is great and you will not see any slowdown in performance whether internet surfing, streaming videos or using the most powerful Android Apps currently available.

A couple of years ago and you would have almost definitely found something that let a Chromebook down. However, this appears to be a thing of the past with the Chromebooks launched recently. That can also be said for the HP x 360 as the display on offer will get no complaints.

The display you get is a 14 -inch IPS panel offering 1080p. It provides a really crisp sharp image and that IPS display makes viewing at an angle an absolute pleasure.

You will be happy using it as a laptop or a tablet. The touchscreen display is responsive and the chassis is slim enough for it not to look too bulky in tablet mode.

The launch of Android Apps means you need to consider how much storage space a Chromebook now offers. It’s good to see the HP x 360 offers 64GB of storage. There are other Chromebooks out there that now offer 128GB, but there is nothing to be concerned about with the 64GB available here.

You also need to remember that the Micro SD slot means you can add further storage to your Chromebook. Also, Android Apps now support being installed on external memory. This has greatly reduced the absolute need of having lots of internal storage.

The keyboard on the HP x 360 is great to use. The key travel available is perfect for anyone looking to type their latest novel on. It’s really good to see that the keyboards available on Chromebooks have improved drastically recently.

It comes with all the ports you need on a Chromebook. You get a standard USB port, which comes in handy if you have not yet upgraded your peripherals to the Type – C standard. For those that are looking for the latest connectivity, you’ll be happy to know it also comes with two Type – C ports.

If you are worried about not having enough storage then you do not need to worry. It also comes with a Micro SD port, which is great for adding extra storage to your Chromebook computer.

It’s really a great time for the Chromebook. Over the last year, we have seen so many decent Chromebooks being launched. However, this does mean it’s a little more difficult choosing your next Chromebook. Greater choice can create confusion.

The HP x 360 Chromebook is definitely worth considering. Not only does it look super cool it performs well thanks to the Intel i3 processor and 8GB of RAM. The Hybrid works great as a laptop or tablet. The price of the Chromebook is relatively competitive as well when you consider the performance the HP x 360 delivers.

The display on offer is also great with its IPS panel and 1080P resolution. The touchscreen in tablet mode also works perfectly well.

This is a a great Chromebook and is definitely worth considering when purchasing a new Chromebook.