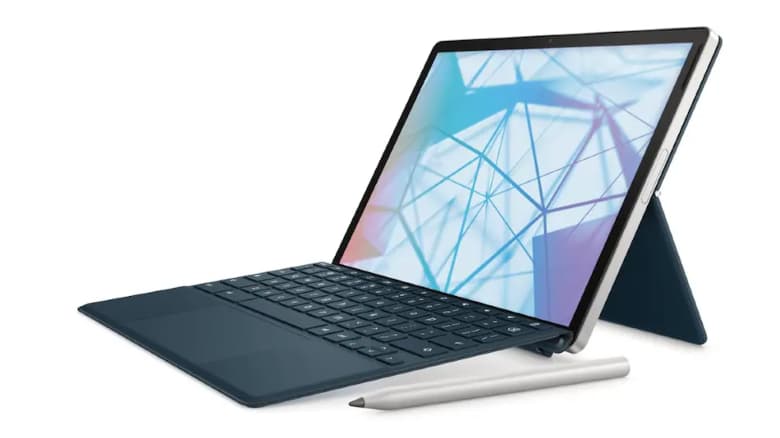 When it comes to Chrome OS one of the biggest players in the market is HP. They’ve seen the biggest increase in sales in 2020, and this has continued into 2021. I guess there is no surprise then that they want to stay in the number one position. To help achieve this they’ve recently launched a new HP Chromebase, which looks amazing. They’ve also released a detachable Chromebook, which also looks like the best Chrome OS computer of this type since the Pixel Slate.

It looks very similar to a Microsoft Surface Pro, which isn’t a bad thing at all because they are well-built laptops. The difference being the new HP Chromebook x2 11 runs on Chrome OS rather than Microsoft Windows. A kickstand makes it easy to use as either a laptop or a tablet. Chrome OS is much better in tablet mode than it once was, so I’m not surprised we are seeing more of these devices.

Personally, I think they are a much better option than a Hybrid laptop if you’ll be using it as a tablet a lot of the time. This is because Hybrid devices feel strange to handle in tablet mode. A detachable Chromebook truly offers both a laptop and tablet in one device. The keyboard magnetically attaches to the tablet, which makes it very easy to move between both modes.

It comes with an 11-inch display, which you may consider a little small. However, this is the perfect size for using this device in tablet mode. Hybrid laptops that offer a 14-inch display look a little silly when using them as a tablet. The great news is that it comes with a pretty high resolution of 2,160 by 1,440.

There are different configuration models available, and you can also get an LTE model that supports 4G. Making it a great 2-in-1 computer to use on the move. Ranging from 4 GB to 8 GB RAM options and storage options of 64 GB or 128 GB. Giving you a variety of options to get a laptop that is most suitable for your needs.

The Snapdragon processor is perfect for Chrome OS has it’s been specifically designed with cloud computing in mind. It offers improved power-saving efficiencies, which means you’ll get up to 11 hours of battery life from the HP Chromebook x2 11. The good news is the cameras provided on this laptop are much better than what you’d normally find on a laptop. This is most likely due to the huge movement we’ve seen where people are working from home a lot more. This has increased the need for better camera quality for video calls.

Another great addition is that it comes with an HP USI stylus as standard. This is good to see because it adds a lot of flexibility. Using a stylus on a tablet is a great way to get creative, and it can offer hours of fun. There are also plenty of Android apps available to make the most out of using a stylus with Chrome OS.

It will be available in the USA from August, but I’ve not yet been able to find this on the HP website. The recommended retail price of $599.99 is almost double the price compared to the Lenovo Chromebook Duet and Asus detachable. However, you need to remember this offers a much better design. Also, you get the use of the Stylus, which isn’t available on the cheaper detachable devices we’ve seen from Lenovo and Asus.