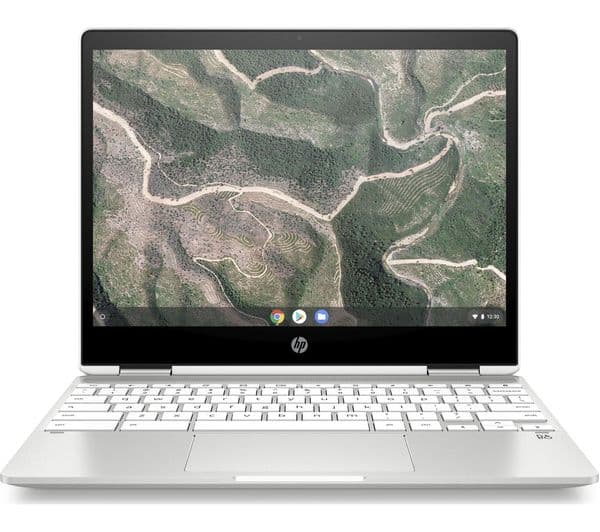 When you see x360 against an HP Chromebook you immediately think of the higher-spec laptops such as the HP x360 Chromebook, which was launched a couple of years ago.

However, HP did inform us that we’d see two new budget HP x360 Chromebooks, and this is one of them. I mention this because it can get very confusing recognising one particular model against the other.

I do wish laptop manufacturers would make their laptop model names different enough, so you don’t accidentally purchase the wrong model. So that’s the rant over about model names.

Now we can get onto the serious stuff. Let’s take a closer look at the HP x360 Chromebook 12b to see if this is the Chromebook for you.

The HP x360 Chromebook 12b is very similar to all the other HP laptops you see. Whether it’s a windows based machine or a Chromebook. This isn’t a bad thing because I like the look of HP laptops.

They just look like everyday ordinary-looking laptops, which is what most of us are looking for. The lid is white and has the well known HP logo in the middle and the underneath of the laptop is grey.

The base of the laptop is aluminium and the lid is made of plastic. This is perfectly fine for a budget Chromebook, and it also means it’s pretty lightweight. At just over 1.32kg/2.9lbs you’ll easily be able to carry this laptop around with you.

PERFORMANCE FROM THE HP x360 12b CHROMEBOOK

You get an Intel Celeron N4000 dual-core processor, which is what you’d expect to see from a budget laptop. This is not a bad thing though when you consider the price. Also, Chrome OS is a lightweight operating system, so you don’t need too much power for everyday tasks.

It’s capable of speeds of up to 2.60 GHz and comes with 4MB of cache to speed up those regular tasks the processor performs.

It will be more than capable of carrying out tasks such as internet surfing, word processing and spreadsheets. You’ll have no problems performing these tasks with the Intel Celeron processor this laptop uses.

Most of the Android apps will perform just fine as well. Also, you can easily play PC games on a budget Chromebook without running into any performance issues.

It comes with 4GB of RAM, which is more than enough for a Chromebook. You’ll easily be able to stream movies and play Android apps with the amount of RAM on offer.

Also, the 4GB of RAM will be great for productivity as well. Whether that means word processing or using a spreadsheet. You’ll find the amount of RAM is more than enough.

It’s nice to see it comes with 64GB of storage. A Chromebook at this price could have easily offered half this amount. However, HP has done the right thing by offering extra storage.

Chromebooks don’t need to worry about storage too much because they are cloud computing devices. This means you should be taking advantage of saving most of your work in the cloud with Google Drive.

Where storage is used is when it comes to installing Android apps. These install locally, so if you like using a lot of apps. You’ll be happy with the 64GB of storage available.

The display is a little unusual. I say this because it uses a 3:2 aspect ratio rather than a more traditional 16:9. This isn’t a bad thing though especially if you’re buying this laptop for work or education.

It means you’ll get a lot more information on the screen when using a word processor. I personally like laptops with 3:2 aspect ratio compared to 16:9, as you can be more productive.

Another unusual thing to note about the display is the resolution. You’re getting a 12-inch display with a 1,366 by 912 resolution. This throws any standard resolutions like Full HD or Non-HD out of the window. However, this is nice to see when you consider the aspect ratio. It makes sense.

It comes with an IPS panel, so you’ll have no problems viewing the display at different angles. Also, the touchscreen works well when using Android apps.

For the price of the Chromebook, the display is pretty reasonable. The IPS panel will ensure you get decent enough viewing angles, which is important. You may have preferred a slightly brighter display, but it isn’t too bad as long as you’re not in direct sunlight.

The keyboard is important for anyone who needs to do a lot of typing. The keyboard on the HP x360 12b is perfectly fine to use. It’s not the best keyboard available, but for the price, it isn’t bad either.

You’ll easily be able to type an essay on this without it causing any fatigue, which is the most important thing when you need to type a lot.

The connectivity is impressive. It comes with an older type USB port and two newer USB Type-C connections. The Type-C is used for charging the laptop and also allows you to add an external display.

If you’re worried about running out of storage then you don’t need to be too concerned. The Micro SD slot means you can easily add further storage down the line without spending too much money.

The speakers are pretty decent for the size of the laptop. I don’t think any laptop is amazing when it comes to sound. It’s always best to use a pair of headphones, so it’s good to see a headphone jack is available on the HP x 360 12b Chromebook.

If you’re looking for a budget Chromebook for work or school. Then this might be the one for you. It’s small enough to carry around almost anywhere and the 3:2 display is ideal for being productive.

The battery is really impressive and you’ll easily get 10 hours out of this laptop from just one charge.

The 2-in-1 design means you can easily swap from being productive to playing Android games, which makes it a great all-rounder.

Is it the best Chromebook you can buy. Well, of course, it’s not, but for the price, it isn’t too bad either. If you want a 12-inch laptop with a decent display at an affordable price. Then this may be the Chromebook for you.