The HP 11 Chromebook tablet is also known as the HP x 2 Chromebook because it’s seen as the replacement for one of the first-ever Chrome OS tablets. When the Chromebook was originally launched there was no such thing as a 2-in-1 Chrome OS tablet. That is until HP released the original HP x 2, which was well before its time.

Since then we’ve seen Google’s attempt with the Pixel Slate, but it wasn’t until Lenovo launched the original Lenovo Chromebook Duet, that guaranteed the Chrome OS tablet was here to stay. The Lenovo Duet was a huge success and it was only a matter of time until HP took notice and released a new detachable into the market.

I’m glad they did because the result was the new HP 11 Chromebook x 2. A huge improvement on the original and a display and processor performance that would leave the original Lenovo Duet standing. 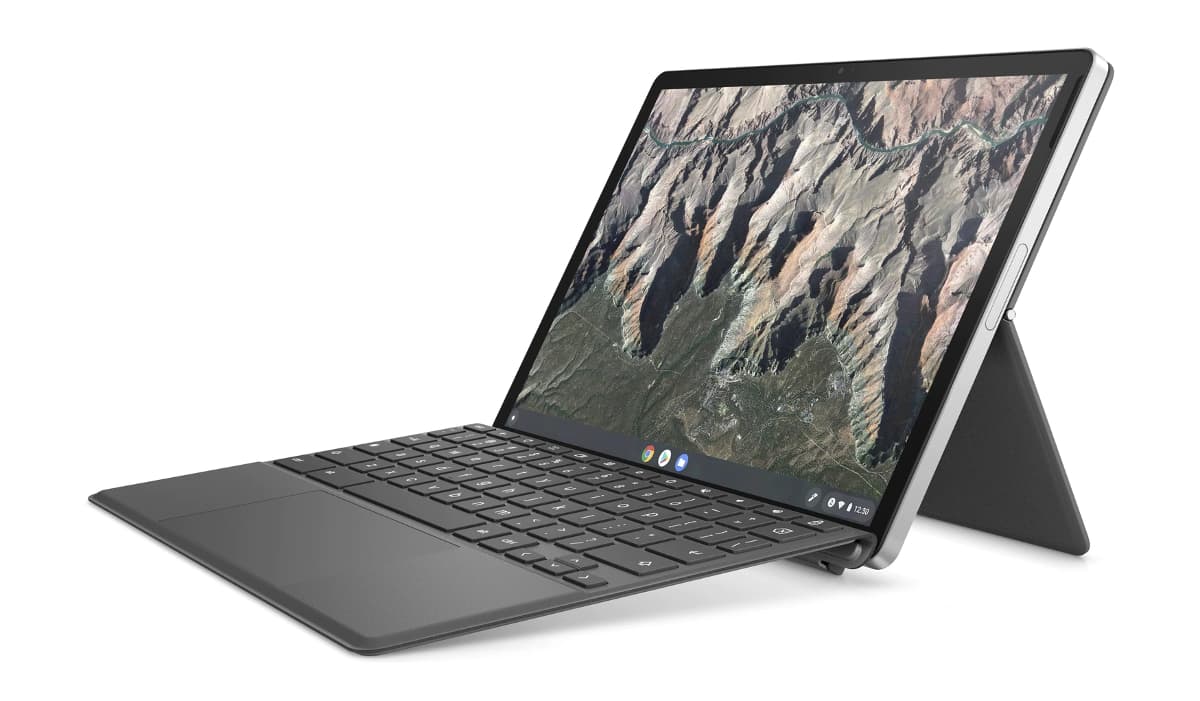 The HP 11 Chromebook x 2 is a great 2-in-1 Chrome OS detachable. In fact, it’s one of the best Chrome OS tablets currently available. It’s well built and has enough performance for what most of us need from a laptop.

The first thing you’ll notice is the build quality is something HP has put a lot of effort into. The original Lenovo Duet, which was a budget device also looked a little cheap. There was nothing wrong with this of course because this was the first Chrome OS tablet after the expensive Pixel Slate. So Lenovo went with the idea that a cheap Chrome OS tablet would sell a lot more units.

The success of the Lenovo Duet has allowed HP to offer something that looks a little more expensive. HP is not offering just a higher-performing detachable. They’ve also ensured it’s a detachable laptop you’ll be happy to be seen with. It looks very similar to the Microsoft Surface Pro, which is mainly down to the keyboard. Instead of the plastic-looking keyboard, you get with the Lenovo Duet. The HP x 2 has put a lot more effort into how it looks.

Thanks to its detachable capabilities, you can remove the keyboard and use it just like a tablet. This is what I really like about 2-in-1 Chrome OS tablets. Using them as a tablet works much better than a Hybrid Chromebook with a rotating lid. I’ve never really got into using a Chrome OS Hybrid in tablet mode, as they are far too heavy.

I really like the look of the HP x 2 11. It’s not the slimmest tablet you may have used, but the solid thick frame actually makes it look good. The Bang & Olufsen writing on the side of the tablet also makes this look like an expensive tablet. After all, Bang & Olufsen are not exactly cheap when it comes to offering audio equipment. Its solid slab look is something I really like and it’s pretty lightweight thanks to being made from aluminium.

The tablet weighs in at 0.56kg/1.23lbs, which is incredibly lightweight when you consider the solid build quality HP has gone for. Having a tablet, which is light in weight is really important. If you’re anything like me and use a tablet to read a magazine. It’s really important to have a tablet you can hold in your hands for a long period of time.

The keyboard and kickstand, which is used to stand the tablet up weigh in at 47kg/1.03lbs. This makes the overall weight of the tablet and keyboard just 1.03kg/2.26lbs, which isn’t too heavy. In fact, it makes the HP x 2 11 a great choice for someone who needs a laptop to use on the move.

When it comes to performance the HP x2 11 offers a relatively decent experience. Chrome OS is a lightweight operating system, so you don’t need a high performing processor to get most things done. If you’re looking for a Chrome OS device to surf the internet, word process, use social media, watch YouTube and Netflix movies then the HP x2 is perfectly capable of all these tasks and more.

The Qualcomm Snapdragon processor is more than capable of dealing with daily tasks. You should also find most Android apps work without any issues. However, intensive apps with detailed graphics may perform a little slower. However, considering most configuration models the HP x2 11 come with 8GB of RAM. You really should not experience too much lag.

8GB of RAM for a Chrome OS tablet is more than enough. You can still get most things done with 4GB of RAM. Therefore, it’s really good to see HP has offered double the amount of RAM. Whether the Qualcomm processor can take full advantage of this is a different matter. However, considering the price of this tablet, it’s really impressive that 8GB of RAM is on offer. Find out more about how much RAM you need for a Chromebook.

Chromebooks typically need less storage than you would need on a Microsoft computer. This is because you can save most of your files in the cloud. I’d recommend using Google Drive for storing files in the cloud, as it has been fully integrated into Chrome OS.

This means you can save most files in the cloud and save your local storage space for what you cannot store in the cloud. This includes Android and Linux apps, which are stored locally. This is what will take up most of your storage space. The HP x 2 comes with 64GB of storage, which is more than enough. You’ll be able to install plenty of Android Apps without running out of space. Find out more about how much storage you need for your Chromebook.

If you’re intending on installing Linux Apps then you may find you’re slightly restricted with 64 GB of storage. I’ve installed plenty of Android apps on a Chromebook with 64GB, however, I’ve only been able to install a handful of Linux apps at the same time. If you’re not too interested in installing plenty of Linux apps you should be fine with the storage on offer. A 128GB model is available from some retailers if you want to take full advantage of Linux Apps.

The display offers an incredibly high resolution of 2,160 x 1,440, which means you’ll get really crisp text and images. This resolution on a display of just 11-inches is going to look very impressive. The aspect ratio of 3:2 is also a good choice for a device you’ll most likely be using in tablet mode most of the time.

You’ll not be disappointed with the brightness either. At just over 400 nits means you’ll not have any issues using this tablet in brightly lit areas. Really important if you want a tablet to use on the move. A display without the necessary brightness is difficult to use when the sun is shining down.

The IPS panel also means you’ll get great viewing angles and colours are more true-to-life and vivid. An IPS panel is an absolute must if you’re looking for a Chromebook with a decent display.

Most of the Chrome OS tablets we’ve seen to date, apart from the Pixel Slate, have not been known for having great keyboards. This is mainly due to most Chrome OS tablets to date being targeted at the budget market.

The HP keyboard is definitely much better than the keyboard you get with the Lenovo Chromebook Duet. It’s perfectly fine to type with even for long periods of time, which truly makes this a great 2-in-1 device. I love the fact you can raise the keyboard thanks to the magnet, which also helps when typing, and is very similar to the experience you get with the Microsoft Surface Pro.

Something that would have been nice to see is a backlit keyboard. I appreciate the keyboard may not be seen as important on a detachable Chromebook. However, if you do need to type a lot, you will miss not having a backlit keyboard when typing in the evening.

The connectivity you have available on your computer is really important. Tablets are known for offering less connectivity than a laptop, and this is the case with the HP x2 11. You’ll not find any older USB Type-A ports, which means you’ll not be able to connect hardware that uses a Type A USB port.

If you do have older hardware, which uses Type-A, you’ll have to buy a separate adapter. These are pretty cheap, so isn’t a major issue, but it does mean reaching for the adapter whenever you need to connect these devices.

You do get two newer USB Type-C ports, which is great for connecting more modern peripherals. It’s not uncommon for tablets to only use one type of USB port. Therefore, I would not let that put you off. The good thing about USB Type-C is that you can also use it to charge your tablet and connect an external display. It’s a shame HP decided to put both of these ports on the same side of the tablet, which can be frustrating when it comes to connecting leads.

Something that you may be unhappy about is that there is no headphone jack available. To use a wired pair of headphones you would, again, need to buy a USB C headphone adapter. Considering this isn’t the slimmest tablet I think HP could have easily fitted a headphone jack. You can of course use a pair of Bluetooth headphones, which is what HP appears to be wanting you to do here.

One great addition to the HP x 2 11 Chromebook is the Stylus. If you’ve not used a stylus before you’re definitely missing out. I’ve used a stylus on a few Chromebooks and I absolutely love it. You can spend so many hours casually sketching and just generally having fun.

The HP x 2 11 should come with a stylus included. However, it’s a good idea to check on the retailer’s website before deciding to hit that buy it now button. If you do need to buy a separate Stylus. Then I would highly recommend the Logitech Pen, which was made for kids but is perfect for adults as well.

The HP x 2 11 detachable Chromebook is a definite upgrade from the original. It’s also a great choice if you’ve had your eyes on the original Lenovo Duet, but wanted a tablet with better build quality and performance.

It has a fantastic display and the build quality is solid. The kickstand instantly attaches to the back of the tablet thanks to the magnet, which makes it easy to place the tablet in different positions. The keyboard is decent and you’ll be able to type for long periods, however, it would have been nice if the keyboard was backlit.

Considering the price of the HP x 2 11. This is definitely a good choice if you’re looking for a 2-in-1 detachable Chromebook. HP has done a really good job with their latest Chrome OS detachable.