How to use the new Chrome OS tablet functions 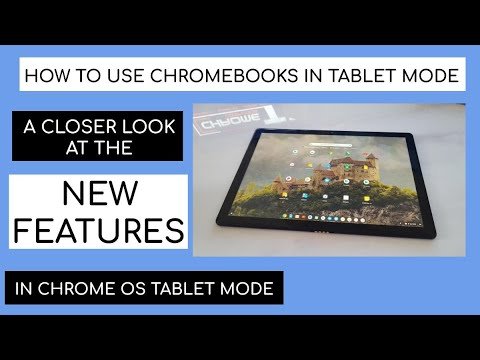 When the Chromebook was originally launched in 2011 it came in laptop form. It wasn’t until much later that we started to see Hybrid laptops. A Hybrid laptop can be used as both a laptop or tablet. By 2018 there was a wide range of Hybrid Chromebooks to choose from. You could even choose a Chrome OS tablet thanks to the Pixel Slate.

This is one of the reasons why the Pixel Slate did not succeed. The Pixel Slate is a fantastic piece of hardware but it was sadly let down by the Chrome OS tablet experience. Fast forward to 2020 and thankfully this is no longer the case.

From about 2019 onward Chrome OS tablet mode offered something you’d be happy to use. It was a little too late for the Pixel Slate, as Google had announced they would not be bringing out any further Pixel Slate tablets. However, if you can still get your hands on one I’d definitely consider it because they are simply fantastic.

Also, Lenovo has since bought out a budget Chrome OS tablet, which is the Lenovo Chromebook Duet 2-in-1. This tablet offers very good value for money and is the only true Chrome OS tablet launched since the slate.

I’ve got a great feeling about Chrome OS tablets in the future. I’m hoping we’ll see other manufacturers start to consider bringing these tablets to market. They offer the best flexibility when it comes to Chrome OS, so as Chrome OS gets more popular I’m hoping the Chrome OS tablet is part of that success.