How to use the Chrome Task Manager 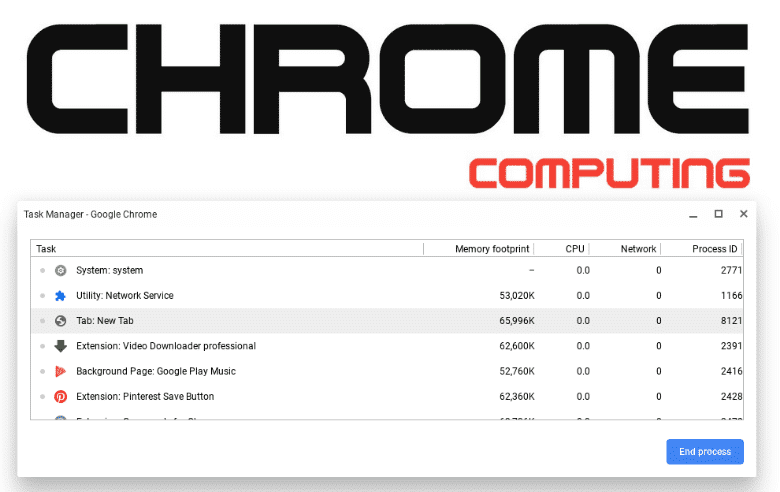 A really handy feature on Microsoft Windows is the task manager. If you’ve ever used Windows I’m sure you’re only too aware of this, but did you know that Chrome also comes with a Task Manager?

The Chrome task manager is really useful because it allows you to see what applications are running in the background. This is really beneficial if you’re using a Chromebook because you can instantly see what apps are using your system resources.

IT’S EASY TO FORGET ABOUT THE APPS YOU’VE INSTALLED

I don’t know about you but I tend to install apps on my Chrome Browser and completely forget about them a few days later. This is fine if you want the app to run in the background. However, having apps running in the background can take up valuable resources.

There is also a possibility that you have apps running in the background that you completely forgot about. By using the Chrome Task Manager you can instantly see the apps you have running.

It also shows you the amount of system resource each app takes up. You might end up being pretty shocked with how much even the simplest of apps need to run in the background.

It’s also important to try and keep on top of the apps you’ve installed because on occasion these could be causing you problems without even realising.

HOW TO USE THE CHROME TASK MANAGER

If you’re using a Chromebook it’s really simple to open the task manager in Chrome. Simply hold down the ‘search key’ and then press ‘Esc’ on your Chromebook keyboard. Alternatively, open the Chrome Browser and go to ‘Settings’ then ‘more tools’ and click on ‘Task Manager’.

Once you’ve done that you will see a task manager open similar to the one below. You can expand the window to make it full screen if you prefer.

You’ll most likely see ‘Browser’ and ‘GPU Process’ at the top of the list. I would not recommend ending these processes because they are needed.

You may also see lots of processes with a zero footprint, which mean nothing to you. Again, until you have done some further investigation I would probably leave these alone.

However, if you scroll further down the list you will then come across apps that you will recognise. These are apps that you’ve installed. As mentioned earlier, you may be surprised how much memory these apps are using up.

WHAT HAPPENS IF YOU END A PROCESS

You will notice at the bottom right of the list in the Chrome Task Manager the ‘End Process’ button. If you click on this while one of the tasks is highlighted it will end the process.

This is really useful if you want to close an app for the current session. This will stop the app from running in the Chrome browser until you next log out or shut down your device.

Using the task manager will come in handy if you’re experiencing problems but unsure what is causing it. It will allow you to experiment with closing down certain apps, which may help you identify the problem.

I immediately removed some apps when opening my Chrome task manager. This was mainly due to forgetting they were even installed and the shock at how much memory some of them use.

Using the ‘end process’ button only closes the app in that session. If you want to remove the app completely you need to do this in your Chrome browser.

You can do this by going to ‘settings’ > ‘more tools’ > ‘extensions’

This will then display the apps you’ve installed and gives you the option to either turn them off or to remove them completely.

1 thought on “How to use the Chrome Task Manager”