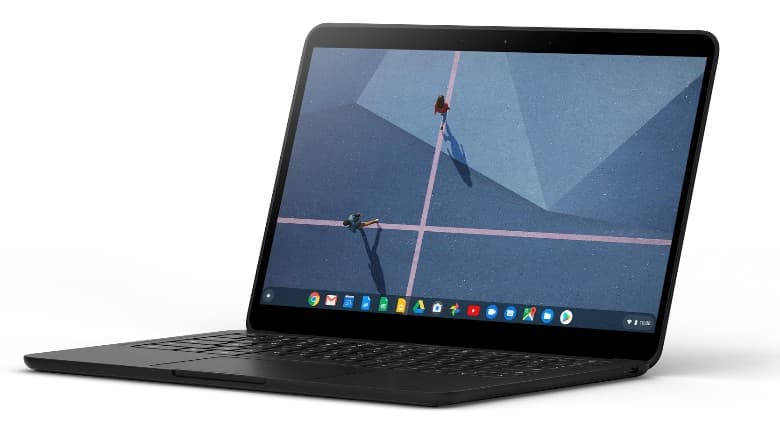 I love reviewing Chromebooks, especially in the last couple of years because it makes me really happy to see how far Chrome OS and the Chromebook has come.

So when it came to reviewing the latest Chromebook by Google I knew I would find it a pleasure to write about.

Google has moved away from its usual offering, which is state of the art specs and high pricing. Instead, they’ve opted for a Chromebook that offers everything you need with a fantastic design at an affordable price.

When I mention being able to own a Chromebook made by Google. I’m not just talking about the name. Google’s direct competition is Apple, so you know any product they bring to market is going to amaze.

This is the first thing you’ll notice when you get your hands on the Pixelbook Go. The design and build quality are what you would expect from one of the leading technology companies.

You can see Google has put a lot of effort into making the Pixelbook Go one of the lightest Chromebook devices available. It weighs in at just 2.3 pounds, which is just over 1kg. This makes it the lightest high-spec Chromebook ever to be released.

This is thanks to the metal chosen, which is magnesium rather than the traditional aluminium. Although the Pixelbook Go is extremely light, it’s definitely not fragile. The frame is extremely sturdy and you’ll have no issues of external damage from the accidental knocks that can happen when out and about.

IT’S NOT A HYBRID

If you already own a Chromebook then you’ll most likely be familiar with the term Hybrid. That’s a device that can be used as a laptop or tablet. Also known as a 2-in-1, which has become extremely popular with Chromebooks over the last couple of years.

Google has decided not to offer this option with the Pixelbook Go. The device can only be used as a laptop, which means the ability to use it as a tablet is not an option. Do Hybrid Chromebooks have a future in 2020.

This may upset hardcore Chrome OS fans who have got used to having the 2-in-1 capability. However, although a Hybrid device gives more flexibility it should not put you off the Pixelbook Go.

I’ve owned a few Hybrid Chromebooks over the years and I very rarely use them as a tablet. It’s a great feature but feels a little awkward in practice.

The Intel i5 8th generation processor can handle anything you throw at it. Chrome OS is an extremely lightweight operating system, so it does not need as much power as traditional laptops. You’ll find no task that the Pixelbook Go is incapable of performing.

The processor comes with 4MB cache to help regular processes to perform well. It also comes with a base speed of 1.30 GHz and is capable of reaching speeds of up to 3.90 GHz. What processor to look for when buying a Chromebook.

Whether you’re surfing the internet or streaming the latest blockbuster in high definition, you’ll come across no lag at all. This is also the case with Android Apps and multi-tasking. The processor performs well in all situations.

The 8GB of RAM also keeps the device ticking along without any issues. This is good to see because that extra RAM really does help when you really need it. How much RAM do I need for my Chromebook.

The display is simply amazing to look at. This is one of the areas where you see that owning a product made by Google is more than just the name.

Apart from the high-end model, which boasts 4K. The rest of the models come with a full HD resolution of 1,920 by 1,080. You may think this is pretty standard for a high-end device, which it is. However, the colours and sharpness of images displayed on the Pixelbook Go are outstanding.

The 13.3-inch display in such a lightweight and compact device is impressive in itself. You’ll also be happy with the touchscreen, which performs with pinpoint accuracy. Find out more about the display you need on a Chromebook.

If you’ve read any of my other reviews you’ll know how important a keyboard is for me. When you need to type on a daily basis the keyboard is really important.

You’ll be happy to know that the Pixelbook Go keyboard is simply amazing to use. In fact, it’s possibly one of the best keyboards available on any laptop on the planet right now.

The keys are spaced out perfectly, which is important in a device as compact as the Pixelbook Go. The keys are simply a joy to type on, which makes typing all day long an absolute pleasure. You’ll definitely not be disappointed and the backlit display means you’ll be able to continue typing into the night.

When you consider the Pixelbook Go is the perfect laptop for anyone who needs a device to use when out and about. You’d expect a battery that can last throughout the day.

The battery life available on the Pixelbook Go is fantastic. You’ll easily be able to use the device all day long without the need of a charger.

This makes the Pixelbook Go a truly portable laptop device. Perfect for people with busy lives that need a device on the move. Also, should you run out of battery you’ll be happy to know a 20-minute charge will give you a power boost of up to two hours.

It’s obvious Google has targeted the Pixelbook Go to people on the move. Keeping the device as lightweight and compact as possible was key during the design stage.

This means they’ve kept connectivity to an absolute minimum. You’ll not find any older type USB connections on the Pixelbook Go. This may be a little frustrating for some, who still have older peripherals that use the older USB A connection.

However, it does come with two USB Type-C connections. Type-C is the USB connection of the future, so it makes sense Google opted for these instead. Both Type-C connections are capable of charging and being used to hook up to an external display, which is really good to see.

However, there is one major drawback to the Pixelbook. The only one I could actually find. It does not have a Micro SD slot, which means you cannot easily install extra storage at a later date.

This is a little disappointing, but we must remember the Chromebook is a cloud device. This means most of your files should be stored in the cloud, using a service such as Google One (previously Google Drive). Find out more about using a Chromebook with Google One.

The problem is that you cannot install Android apps in the cloud. These apps are stored locally, which means it’s now easier to run low on storage space.

The Google Pixelbook Go is a great Chromebook device to buy in 2020. I absolutely love the design, as you can see a lot of effort has gone into it.

If you’ve always wanted a Chromebook by Google but was put off by the price. Then the Pixelbook Go was made for you. Sure, it’s still not cheap, but let’s not forget; this is a high-spec device.

The keyboard is the best you’ll find anywhere (move over Apple). The display is a pleasure to look at, and the lightweight compact device is perfect for people who need a laptop on the move.

I’m unsure why Google decided not to include a Micro SD slot. It’s definitely the only negative I could find about the device. It also means it’s important you choose the right model variant. The basic model is great, but you’ll have to consider whether the 64GB storage is enough.

This is why I personally would recommend the mid-range model. Not only do you get an Intel i5 processor, but you also get 128GB of storage. Find out more about the model variants available for the Pixelbook Go.

Looking at the current Chromebook devices available. I’d say the Pixelbook Go is without question, one of the best available to buy right now.