Get better performance from your Chromebook with Virtual RAM 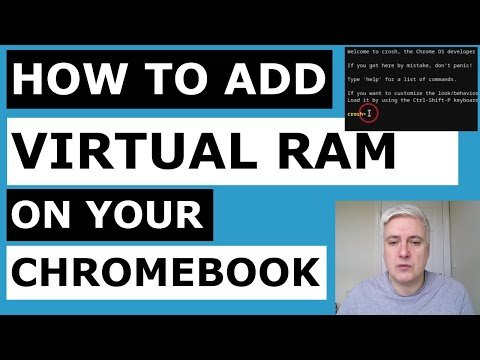 The Chromebook is known to need a lot less processing power than other types of computers. This is because Chrome OS is an extremely lightweight operating system. That being said, the subject about how much RAM you need for your Chromebook in 2021 is still something that gets people talking. It’s true you need more RAM now than you did a few years ago, but you’d expect that. If you’re running a Chromebook with at least 4GB then you should not have too many issues.

If you’re using a Chromebook with 2GB of RAM or even possibly 4GB and you need extra RAM. Then the only real way to do this is to go out and buy a new Chromebook. This obviously costs money and not everyone might be in a position to do this. If this sounds familiar then perhaps you should try and give your Chromebook a boost by adding virtual RAM. In the Linux world, which is what Chrome OS runs on it’s called a swap.

WHAT IS A SWAP

A swap allows you to use some of your Chromebooks storage as RAM. It uses Z RAM, so you don’t need to worry about it having a negative impact on your solid storage device. All Chromebooks come with solid storage, which is great because it’s much quicker than a PC that uses a hard disk with moving parts. By creating a swap you’ll be able to add virtual RAM to your Chromebook. It will not be as fast as physical RAM, but it should be faster than virtual RAM used on a hard disk with moving parts.

It’s important to note that Chrome OS already does this to some extent. When your Chromebook runs low on RAM it moves some of the data from your RAM into a swap. The difference with creating your own swap is you decide how much storage you’d like your Chromebook to use. The amount you choose all depends on how much storage you have. However, Google recommends not to use more than 2GB of storage as virtual RAM.

HOW TO ADD VIRTUAL RAM TO YOUR CHROMEBOOK

To add virtual RAM to your Chromebook you need to go into your terminal. It’s important to note Google states you use this at your own risk. However, this command is part of Linux, so it’s unlikely you’ll have any problems using this. You can also reverse the action at any time, so if it does not help with performance. You do not need to worry because anything you do is reversible.

That’s it. You’ve now added virtual RAM to your Chromebook. It’s best to give it a try and see if it helps with performance. You may need to use it for a couple of weeks to see if any improvements are seen. If you do get better performance you can leave it running. However, if you’ve not really noticed any performance benefit you can simply cancel the swap following the instructions above.