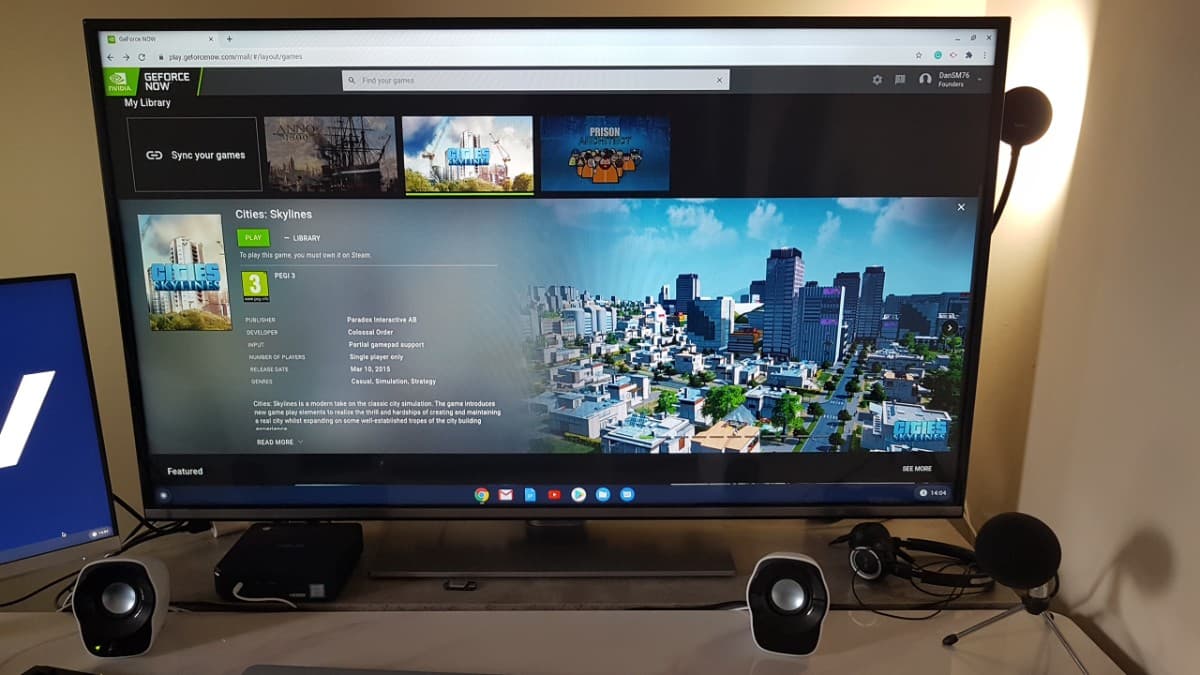 I’ve loved computer games since being given an Atari ST as a teenager by my parents. This continued when I moved to a PC when Atari ended trading in 1992. The first Windows PC computers were more basic than what you get today. You didn’t get dedicated graphics cards because the graphics provided by most games were pretty basic. If you’re looking for a true gaming PC today then you’ll have to spend at least £1,300/$1,300 if you want to play games with advanced graphics. This is because you need a minimum of an Intel i5, 8GB of RAM and a decent dedicated Nvidia Graphics card.

That’s a lot of money for a gaming PC that will possibly be able to cope with the latest games for about four years. This is the problem with buying an expensive gaming PC. Luckily, PC games continue to offer better graphics, but this means more processing power is needed. When I bought my PC a couple of years ago it offered the best specs possible. It’s still capable of playing games today. However, one of my favourite games Anno 1800, which is pretty demanding on the graphics front. Plays much better on my Chromebox than it does on my Windows PC.

PLAY PC GAMES WITH GEFORCE NOW ON YOUR CHROMEBOX OR CHROMEBOOK

A few months ago I signed up to GeForce Now. As a founder member, I’m charged just £4.99 per month. This allows me to play numerous games on the platform on my Chromebook. It also allows me to play games I’ve previously purchased on steam and software providers such as Ubisoft. Not all games are available on GeForce Now, but most of the modern games are and the gameplay is excellent. I never thought I’d see the day where I could play a game like Anno 1800 on a Chrome OS computer. The fact I get better gameplay on my Chromebox using GeForce now than my PC is pretty shocking.

Over time more software developers are likely to work with GeForce Now. This means more titles will be available on the platform. This makes perfect sense because Chromebook sales soared by a massive 287% in quarter four of 2020. So I’m expecting to see more game titles become available on Nvidia GeForce now in the future. There is a free option for GeForce Now if you want to check it out, but it does limit you to just an hour of play. If you find titles you like then I’d definitely suggest signing up for the service.

CHROMEBOX VS CHROMEBOOK FOR GAMING

You can play PC games using GeForce Now on most Chromebooks and Chromeboxes. The internal specs of your computer aren’t that important. I’ve proven this by playing Anno 1800 on my Toshiba Chromebook 2. A computer, which is a few years old now with just an Intel Celeron processor. What really matters when playing games on GeForce now on your Chromebook or Chromebox is your internet connection. You need a good solid connection because the games are streamed over the internet.

To get the best connection it’s better to connect your computer to your router. This will give you a better connection than WiFi. You can still play games over WiFi, but if you want the best game-play. Then connecting your Chrome OS device using an Ethernet cable is the best option. Most Chromebooks don’t come with an Ethernet port, but most Chromeboxes do, so this is the first advantage of using a Chromebox.

The other big advantage is you can hook it up to a large external display and separate mouse and keyboard. You can of course connect an external display to a Chromebook, but having a proper desktop setup for gaming is a much better option. Also, games on Nvidia now on a Chromebook do not work well with the trackpad. You need to connect an external mouse to play games on a Chromebook with Nvidia Geforce now. Trying to play games using a trackpad does not work very well. Try it and you’ll instantly know what I’m talking about.

CHROMEBOX VS PC FOR GAMING

As I’ve already mentioned you can’t play every PC game on a Chrome OS computer using Nvidia GeForce Now. However, You will find a lot of titles are available. Also, if you can’t find a game on GeForce Now, which you like. There are plenty of other games available on Stadia. Between both of these services, you’ll find plenty of games available. A Chromebox costs around £300/$300 for a budget version and around £600/$600 for a higher-spec model. I play games using GeForce now on an Asus Chromebox 3 with an i5 processor. However, as I’ve already mentioned the internal specs are not too important.

Because you’re streaming games using Nvidia GeForce Now all of the processing is done on the internet. All you need is a good internet connection, so all that data can stream without any interruptions. The graphics card processing the game is based on Nvidia servers. This means you don’t need to go out and buy an expensive PC with a dedicated graphics card. Also, a PC graphics card is obsolete after about four years as graphics in games develop. This means if you want to keep up playing the latest games. You have to constantly payout for a new PC every few years.

Using GeForce Now with your Chromebox or Chromebook does not have the same issue. Nvidia GeForce Now will upgrade the graphic processors used with their latest graphics cards. This means you don’t have to pay for this expensive hardware yourself. Just a quick calculation of my monthly GeForce now subscription of £4.99 per month. Over four years that would cost £239.52. That’s a lot cheaper than buying a brand new PC every four years at the cost of £1,300/$1,300.

GAMING ON A CHROME OS DEVICE IS CHEAPER

If you love your gaming but can’t afford to be shelling out on an expensive PC. Then buying a Chromebox is the sensible option. Even if you do have money to buy a new PC. Why would you waste all that money on something that will be useless at playing new gaming titles after a few years? By choosing a Chromebox or Chromebook and using a service such as GeForce Now or Stadia. You’re not only saving money but you’ll never have an issue of your computer needing to be replaced every couple of years.

I love computer games and this is one of the reasons why I own a PC. Now that I can play PC games on my Chromebox I don’t really have any reason to own a PC. There is no way I’d go out and buy another gaming PC at the cost of £1,300/$1,300 when I can get a better gaming experience on my Chromebox. I’m really excited to see where we’ll be in a few years from now. I’ve got a vision than Chrome OS computers will be the computer of choice for gamers who like PC games. I never thought I’d say that a couple of years ago.