Buying a new Chromebook? You need plenty of storage space 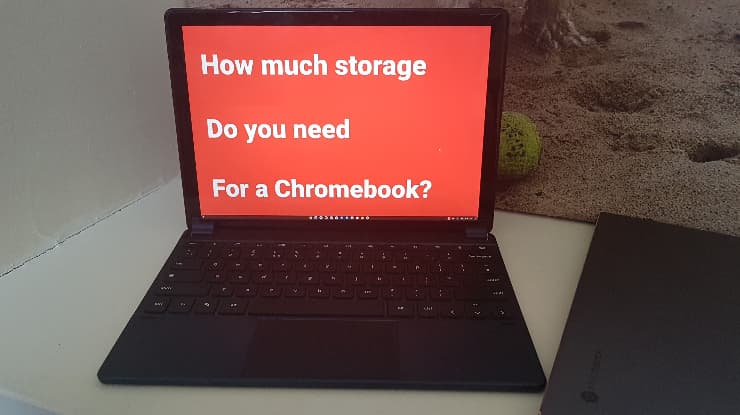 When it comes to storage and Chrome OS. You would have heard many different opinions about how much storage you need. One of the reasons for this is because the storage needed has changed as Chrome OS has improved. Back in 2011 when they were originally launched they came with very little storage. At the time this was commented on as being an issue, but in reality, it wasn’t.

You can of course still do all of this today, and much more, without needing a lot of local storage. This is because Chrome OS was made for the internet and cloud computing is built-in. Find out more about why the Chromebook is perfect for cloud computing and what it means. Any programs you need to use are based in the cloud, and you can also save your files in the cloud. So you may be asking why you would need a lot of local storage?

If you’ve been using a Chromebook for a number of years I don’t think this is headline news. Yes, using Android Apps on your Chrome OS computer is now an everyday occurrence that most of us take advantage of. You’ll also know Android Apps are stored locally on your Chromebook or Chromebox. You cannot install Android apps on external storage, so you need to use your local storage.

Linux Apps out of Beta

A couple of days ago I wrote a post about Linux Apps soon being out of Beta on Chrome OS. Although Linux in Beta has been working fine for some time now. The fact Linux will be leaving Beta is a big thing. Although Linux is great, it is one of the more difficult operating systems to use. However, Chrome OS has been investing a lot of time to make Linux on Chrome OS as user friendly as possible.

A great example of this is being able to install a Linux App Store on your Chromebook. Very much like the Play Store for Android Apps. Sure, it’s not as straightforward to set up, but once done. It allows you to easily search for Linux Apps you can install on your Chromebook or Chromebox. There is still some way to go to make Linux accessible to everyone because not everyone is comfortable with using a command line.

However, the fact you can now use Linux on the stable channel, and it will soon be out of Beta. Will most likely mean more developers will be interested in creating more Linux Apps for the Chromebook. Just like Android Apps. Linux Apps are stored locally.

A lot of the Linux Apps that are available are productivity based. For example, if you want to video edit, edit images or dabble with music editing. You’ll find all of the apps needed to do this available on Linux. You use these type of programs to create and you’ll want to save your creations. If you start to use Linux Apps to video edit. You can imagine how much space you’ll use up for your finished video files.

Yes, we are potentially talking about a whole lot of storage space. If you’re anything like me I never delete my artwork and videos. I keep them saved on my computer locally, so I can use them in the future, and make sure the important stuff is backed up elsewhere.

When you consider in the future we’ll most likely see a lot more Linux Apps being launched for Chrome OS. It’s only natural we’ll start needing more space, not just for the app, but for the files we create with those apps.

Another exciting app I’ve been waiting to see is Steam on Linux. This is something Steam and Google confirmed was being looked into over a year ago. At the moment if you want to play games on your Chromebook. You’ll most likely either be playing Android games, console games on Stadia or PC games using Nvidia GeForce Now. Apart from Android games. Both Stadia and GeForce now need a solid internet connection.

If we do see a Steam app for Linux then it will mean we’ll be able to start playing games again locally. This will immediately require more storage space. Some decent games can take up to 15 GB to install. Only if you install a few games, you could easily take up 128 GB. This is all obviously fantastic news for Chrome OS and is great news for us. However, it does mean you need to start thinking about how much storage will be needed in the future.

If you’re considering buying a Chromebook and you want to take full advantage of what we might see in the future from Linux. Then I’d be making sure the Chromebook or Chromebox you buy has plenty of storage. If everything goes well with Linux. We’ll most likely start seeing Chrome OS computers needing a huge amount of storage space.