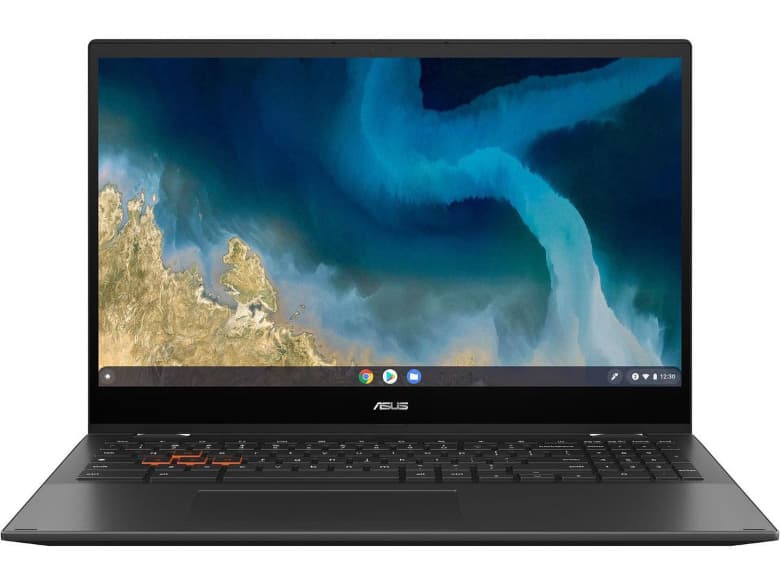 I love Asus Chromebooks as they’ve always looked the part. They not only come with a fantastic cool looking exterior. Most of their medium and higher-end Chromebooks boast those fantastic displays with very small bezels. Although their Chromebooks are great I was getting a little tired of the same old look. An aluminium body with a silver coating.

Thankfully, they’ve realised a change was needed and you can see this with the CM5 Flip. Looking at the keyboard and the highlighted W, A, S and D keys immediately show it’s aimed at the gamers out there. If you don’t already know. A lot of games allow you to use these keys for directional purposes, so having them highlighted makes it much easier to find when playing action-packed games.

Another thing you’ll notice, which is different from most of the Asus Chromebooks we’ve seen over the last few years is the body. They’ve moved away from silver and opted for a cool mineral grey aluminium body. I really like the look of this laptop, and it definitely offers something different. Perfect for anyone who likes to stand out from the crowd.

A whopping 16 GB of RAM and AMD Ryzen 5 processor

If you’re looking for a Chromebook that performs then you’ll not be disappointed with what’s on offer. There are different configurations available, but for the performance-hungry out there. You can get a top-end model, which boasts an AMD Ryzen 5 processor and up to a whopping 16 GB of RAM.

Now you may be thinking 16 GB is overkill, and for a lot of people, this is definitely the case. However, if you’re looking to buy a Chromebook to take advantage of future gaming. Then you’ll be happy with having the choice of buying one of these machines with 16 GB of RAM. At the moment it isn’t really needed for gaming because Nvidia GeForce Now and Stadia provide you with gaming by streaming. This means all the processing power is done on the servers at Nvidia and Stadia, so you can play those games without having a super-powerful computer. If you’re not a gamer, find out how much RAM you should be looking for when buying a Chromebook.

I don’t think we are a long way off seeing a Linux app for Steam. Steam has been working on this app for some time now. Once it has been released it will allow you to install steam games locally on your Chromebook. This means these games will be able to take full advantage of all the processing power your computer provides. This is one of the reasons Asus is offering such fantastic specs. They are fully aware Steam for Linux is just around the corner.

Something else you get with the CM5 Chromebook is SSD storage. Most cheaper devices come with eMMC storage. It’s perfectly fine to use but SSD is much faster and reliable. Also, SSD comes into its own when it’s dealing with transferring large amounts of data. When we’re in a position to play PC games locally. The need to transfer local data at speed is paramount for the game to run seamlessly.

By using SSD storage you should find that you don’t get long pauses in games that need to load different scenarios. Even when you’re playing a game where you’ve not moved to a different scene. If the game demands the transfer of huge amounts of data. You would find this would cause issues if your Chromebook only had eMMC storage. This is Another reason why Asus definitely had gamers in mind when designing the CM5 Chromebook.

It would not be a medium or high-end Asus Chromebook if it didn’t have a great display. You’ll be happy to know Asus has cut no corners here. This is really important for a gaming laptop because visuals are more important than ever.

It comes with a three-sided nano-edge technology display that Asus is known for. This means you get super thin bezels on the left, right and top of the screen. This is something that I find pretty important when buying a decent laptop. A laptop with huge borders around the side looks pretty ugly, and it’s just a total waste of the space available.

Something else that’s pretty important for gaming is having a large display. For a laptop, the Asus offers a very large display compared to the standard 14-inch model. At 15.6-inches you’ll appreciate the extra space when playing your favourite games. The IPS panel means you’ll have great viewing angles no matter where you are seated, and the colours and images on the screen will be vivid and true to life.

There is a lot more this laptop offers than just gaming. If you want to find out more take a look at the Asus CM5 Flip Chromebook on the Asus website.