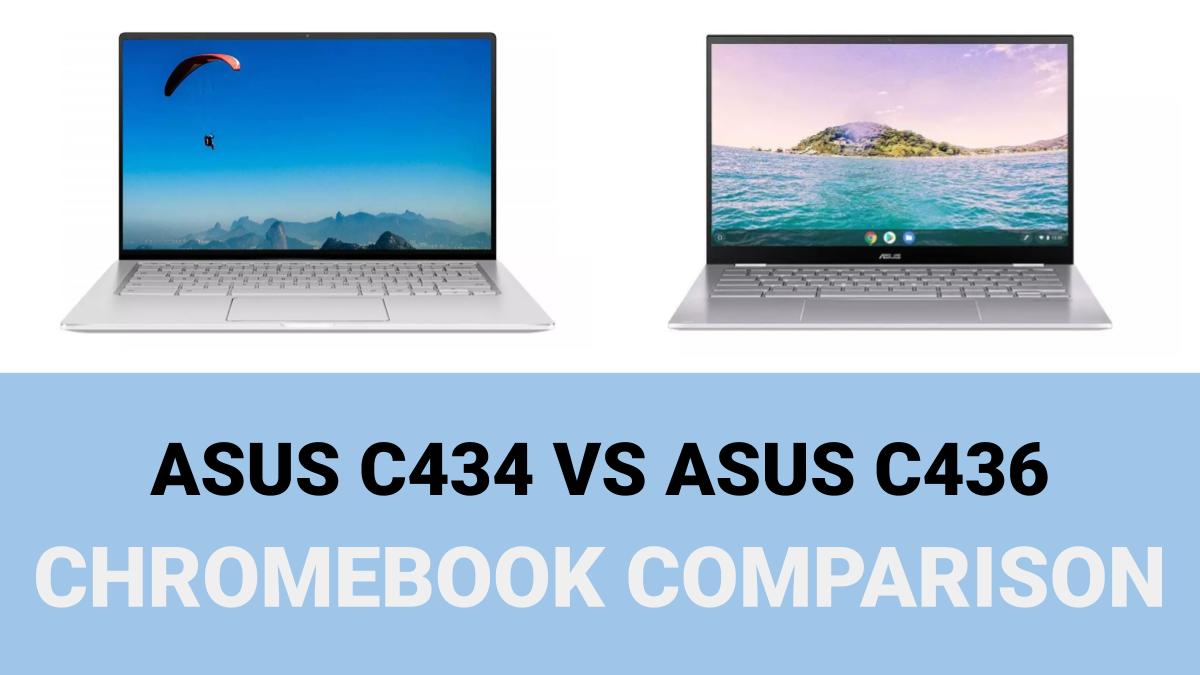 Before we do a direct comparison between the C434 vs C436 we need to look back a couple of years. When the Asus C434 was released a couple of years ago I was really excited. Before its launch, the Chromebook market had not moved much. At the time apart from the high-priced Pixelbook, the best overall laptop was the Asus C302.

I loved the Asus C302 Chromebook because it offered everything you needed. However, it had been around for a couple of years, so a new Chromebook was very much needed.

A year later Asus released the C436. At the time Asus was releasing a lot of different Chromebooks, so it started to get a little confusing of where all the laptops sat in comparison.

The C436 was a replacement for the C434. I say this because it has very similar specs. The problem is I’m not too sure we were needing a replacement this early on. I would have understood it if the C434 flopped, but it didn’t.

This has caused a lot of people to get confused about whether they should buy either the C434 or the C436. So I’ll be looking at both of these Chromebooks to help you decide, which one is right for you in this C434 vs C436 Chromebook Comparison.

Both Chromebooks are well built but the C436 is a little more compact. Being that both laptops come with a 14-inch display. Asus has done a good job of making the C436 as compact as it is.

They look very similar in design and both are Hybrid devices. A hybrid device means it can be used as either a laptop or tablet. The C434 is made of aluminium, which is the metal used in most higher-priced laptops.

However, the C434 feels a lot tougher than the C436. In fact, you may even think the C436 is made of plastic. This plastic feel must be how they used the magnesium because you don’t get the same issue with the PixelBook Go. Because of this the C434 feels and looks like a much stronger laptop when comparing it to the C436.

The keyboard on both laptops is great. You may find the C434 easier to type with though. This is especially true if you’re not a touch typist. I say this because the keys on the C436 are harder to see in some lighting conditions compared to the C434. Both are backlit but the C434 keys are easier to recognise.

The C436 is the better performing laptop here. That isn’t to say the C434 cannot perform. Chrome OS is a lightweight operating system and a Chromebook can perform without needing the highest spec processor.

If performance is more important than anything else then you’ll prefer the C436. It uses the latest tenth-generation processor and is available in three configurations. These configurations start with an Intel i3 but you’ll also find an Intel i5 and i7 model. Have a read of the Asus C436 review for more details on performance.

The C434 comes with an Intel M3 processor. This processor is less powerful than what is available on the C436. However, do not assume a Chromebook with an M3 processor cannot perform because it can.

The Intel M3 processor is more than capable of performing most tasks on a Chromebook. Whether this is surfing the internet, streaming HD movies or using powerful Android Apps. You’ll be able to do all of these with an M3 processor without a problem. Also, you can play PC games on a budget Chromebook using an Intel Celeron processor, so you’ll have no problems playing PC games using the M3 processor.

The basic model of the C436 comes with 8GB of RAM. 8GB of RAM is more than enough for a Chromebook today and in the future. This amount of RAM will help speed up the performance of your laptop.

The C434 comes with 4GB of RAM. Again, you can carry out most tasks with 4GB of RAM. However, if you’re looking at buying a Chromebook you can still use five years from now. Then choosing 8GB of RAM may be a better option. You can find out more by reading the C434 Chromebook review.

When it comes to the storage both the C434 and C436 basic model comes with 128GB. This is plenty of storage for a Chrome OS laptop. Even if you are looking to install plenty of Android apps. You’ll find this amount of storage should be more than enough.

One of the things I love about Asus Chromebooks is the thin bezels around the display. Both the C434 and C436 have really thin bezels. This not only makes the computer look premium. It’s also the reason why both laptops come in a compact chassis compared to the display size.

The display on both is 14-inches and both offer full HD at 1,920 by 1,080. When it comes to the quality both offer a decent quality display. This is helped by the IPS panel used in both laptops, which makes viewing easy from any angle.

Considering the price of the C436 is a lot more than the Asus C434. I would have expected something more from the display. The fact they both use the same resolution and come with an IPS panel is a bit of a shock.

Whenever I buy a laptop, apart from the performance, the display quality is something I compare. What is even more puzzling is the C434 offers the best display from these two Chromebooks.

This is because the brightness from the C434 is much higher than the C436. Both work perfectly well inside, but if you do happen to get sunlight on your screen that causes reflections. The C434 deals with this much better thanks to the extra brightness on offer.

The connectivity is something that differentiates these two Chrome OS laptops. Both come with a headphone jack and Micro SD slot.

The Micro SD slot is a nice touch because it means you can easily add extra storage at a later date. Also, adding storage using an SD card is relatively cheap compared to using an external Hard Disk.

When it comes to USB the newer C436 offers USB Type-C. This makes sense because USB Type-C is the way forward. In fact, most Chromebooks today use USB Type-C.

The C434 also offers USB Type-C, but where it wins against the C436 is the offering of an older type USB connection as well. Although USB Type-C is the future. Having access to an older USB connection means you can easily use older peripherals without any issues.

So you’d expect the C436 to win this comparison being that it’s a newer and more expensive Chromebook. However, it only really wins when it comes down to performance. It’s without question the better performing Chromebook, but you’ll be paying a lot more for that performance.

This is the issue I have with the C436. I don’t think the extra performance alone justifies the price tag. I would have expected something more from the display. At the price, a higher resolution or a 4:3 aspect ratio would have offered a big enough difference. Just providing a higher spec processor and more RAM does not warrant the price tag.

It does not help that the C434 offers a better build quality. Yes, it’s heavier but the aluminium is much tougher than the magnesium used in the C436. Magnesium works great on the PixelBook Go, but Asus hasn’t got it right with the C436.

The display on the C434 is better because it’s much brighter. Also, the connectivity on the C434 offers more flexibility than the C436. I’m not saying the C436 isn’t a great Chromebook because it is. However, it doesn’t offer enough improvements to the C434 when looking at the price.

If performance is the most important factor for you. Then you’ll most likely want to consider the C436. However, if the overall package is important and you don’t want to spend more than you need. Then the C434 wins this direct comparison against the C436.

You may be interested in – Top Ten Chromebooks in 2020