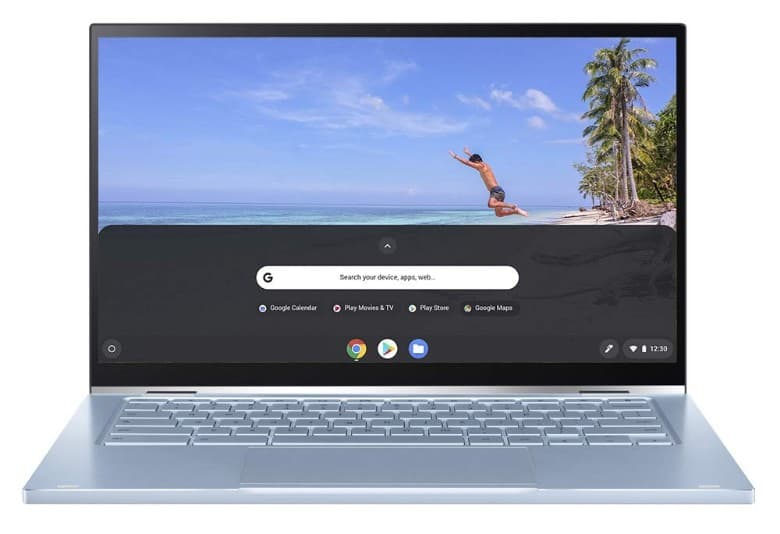 The Asus C433 Chromebook was released at the same time Asus released many other Chromebooks on the market. Because of this, the Asus C433 sits in a strange place. The Asus C434 is considered a better Chromebook, but the difference between them is marginal. The C433 is a great Chromebook because you can usually find this on a deal from different retailers. The only real difference between the C433 and C434 is the C433 is plastic inside. Also, the C434 has a slightly better display. That being said, because the differences are nothing to be too concerned about. This may be a good option if you don’t want to pay for the more expensive C434.

The basic configuration comes with an Intel M3 eight-generation dual-core processor. This type of processor works perfectly with the Chromebook. It also comes with 4GB of RAM, which is fine for what most people use a Chromebook for in 2021. However, if you’re looking to buy a Chromebook to take advantage of Linux Apps in the future. Then you may want to consider whether 4GB of RAM is enough.

If you’re looking for a laptop to surf the internet, use social media, Android Apps, word processing and spreadsheet work. Then the Asus C433 basic configuration model will be able to do all this without any issues. It comes with 64GB of storage, which is more than enough to install plenty of Android Apps and still have space leftover.

If you’re concerned a Chromebook with an Intel M3 is not going to be suitable for your needs. Then you may prefer the Intel i5 configuration. This comes with an eight-generation dual-core processor and double the RAM at 8GB. The extra RAM will definitely give you better performance and will come in handy if using resource-intensive Android Apps. Also, although Linux is still in Beta mode, so at present, it does not use all of your Chromebook processing power. When it comes out of Beta mode it should be able to use more of the computer’s power. Therefore, the Intel i5 version is a better option for anyone interested in Linux Apps.

When it comes to storage you get double the amount from the Intel i5 configuration. 128 GB of storage, which is a huge amount of storage for a Chromebook. This means you’ll comfortably be able to install plenty of Android Apps and give a large partition of the hard disk away to Linux Apps.

The Asus C433 comes with a 14-inch display, and like most modern Asus Chromebooks the bezels around the display are super-thin. This not only means they’ve managed to fit a 14-inch laptop into a 13-inch chassis. It also makes the Chromebook look premium.

It’s a Full HD with a resolution of 1,920 by 1,080 and the IPS panel used means you’ll be able to view the display from an angle without any loss in quality. It also comes with a touchscreen, which makes it perfect for using Android Apps.

The Asus C433 is a Hybrid, which means it can be used as a laptop and a tablet. This type of Chromebook became very popular when Android Apps were introduced to Chrome OS.

All Chromebooks come with an Automatic Update Expiry (AUE) date. Until this date is reached your Chromebook will receive regular updates to the Chrome OS operating system. These updates will include providing new functionality and improvements on existing functionality. They also include vital security updates to keep you safe when surfing online.

When it comes to connectivity the Asus C433 offers one older type USB A port and two newer USB Type-C ports. This is really good to see because it means you can use old hardware that uses Type A and newer hardware, which tend to come with USB Type-C. A USB Type-C provides much better technology because it allows you to charge your device and also connect an external display. This is the reason why most Chromebooks that come with USB Type-C no longer come with an HDMI port.

Bluetooth means you can easily use a pair of wireless headphones, but if you prefer wired then the headphone jack available will allow you to do this. WiFi as standard and over ten hours of battery life mean you’ll be able to use this Chromebook all day on a single charge. The Micro SD slot is great to see because it will allow you to easily add further storage to your Chromebook at a later date.

Before buying a new laptop it’s always a good idea to read some reviews online. However, it’s also important to remember any reviews are the opinion of one individual. Therefore, it’s best to read a few reviews, so you can make your own opinion on whether the Chromebook you have your eye on is right for you.