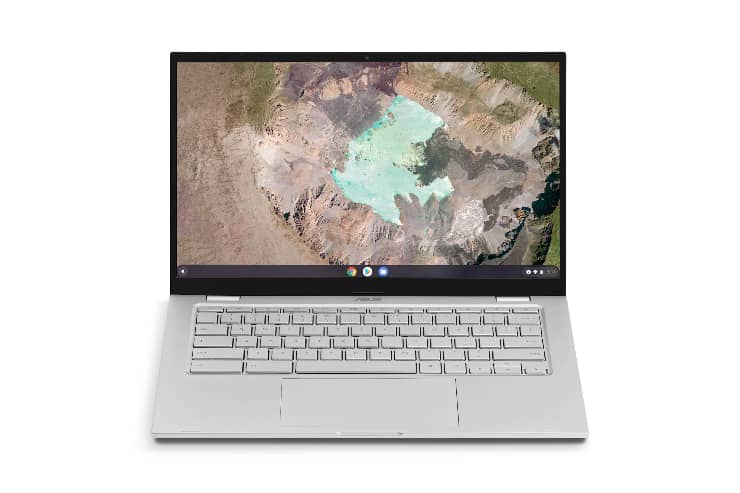 The Asus C425 is a strange Chromebook. It’s not so much the device in question but how and when it was launched. Asus launched the C434, C433, C436 and the C425 all very close to each other. The C425 wasn’t even given any fanfare and it just appeared on retail websites. Before the C434 was launched one of the most popular Chrome OS devices was the C302. It had been a popular choice for many Chromebook users.

Everyone was waiting for the launch of the C434 because this was the direct replacement to the C302. The C302 is a well-loved Chromebook, Asus had to ensure the C434 was just as good. They did a really good job with the C434, and it was a great replacement offering better specs. However, the sudden release of the C433 and C425 confused people. Both considered as lower-entry models to the C434. The C433 is a great Chromebook, but the C425 was overlooked because it was not really needed.

The Asus C425 has an all-over plastic body. This is one of the differences between all the other Asus models released at the time. The C433 had a plastic bottom, but the lid was aluminium. Although the C425 looks great. The price difference is marginal to the C433, so most people opted for the C433 instead.

The C425 is a laptop only. This means it’s not a Hybrid Chromebook that can be used as both a laptop or a tablet. Again, this was not the same as the other models released at the time. There was also a lot of confusion over whether the C425 had a touchscreen. The early models definitely did not have a touchscreen. However, if you take a look at the Asus website today, it now comes with a touchscreen.

The Asus C425 performs most tasks you can do on a Chromebook perfectly well. This is thanks to the Intel M3 eight-generation processor, which is capable of handling Android Apps, word processing, spreadsheets and general internet surfing without any issues.

The Asus website states this computer is now available with a processor up to Intel i5. However, again, the specs sheet on the same page, at the time of writing this post, does not support this. I think the C425 was a disastrous launch for Asus. The message about who it was aimed at was confusing.

The 4GB of RAM is more than enough for most tasks and would work perfectly well with the processor used. However, this processor is also capable of working with 8 GB of RAM.

When it comes to storage there are two options available. The first is 64 GB and the second is 128 GB. Both are considered a decent amount of storage for a Chromebook. At the moment you will easily be able to use a Chromebook with 64 GB of storage without running into any issues.

Even if you want to install plenty of Android apps you’ll still have plenty of space left over for other files. It’s best to try and save most of your files in the cloud, so most of your local storage should be kept for Android and Linux Apps. If you’re intending on installing a huge number of apps then you may want to consider the 128GB model.

You need to be careful when choosing the C425 due to the different options available for the display. When it was originally launched it did not offer a touchscreen. However, it appears a new model has since been released, which does offer a touchscreen. I find changes like this for the same model number extremely confusing for the consumer.

In relation to the panel. You’re getting an IPS panel, which means you’ll get great viewing angles. Also, viewing from an angle will not deteriorate the quality of the image, which is a great benefit of IPS. It’s a 14-inch display and comes with a Full HD resolution of 1,920 by 1,080.

When it comes to connectivity you’ll find everything you need. One older USB Type-A port is handy if you have older peripherals. The two newer Type USB C ports are great for newer peripherals, which only support USB Type C. You can also use USB Type C to charge the laptop and connect an external display.

An SD card reader is included, which means you can easily add further storage at a later date. SD cards are pretty cheap, so it’s a great way of adding extra storage to your Chromebook. However, you need to remember this storage can only be used for storing files. You cannot install Android Apps on the SD card.

SHOULD YOU BUY THIS CHROMEBOOK

It’s not a bad Chromebook. Just launched at a time when Asus gave too many other options. Choosing the C425 over the C433 would only really make sense if the price difference is huge. However, this never appeared to be the case. If you can get your hands on one much cheaper than the C433. Then it may be a decent option.