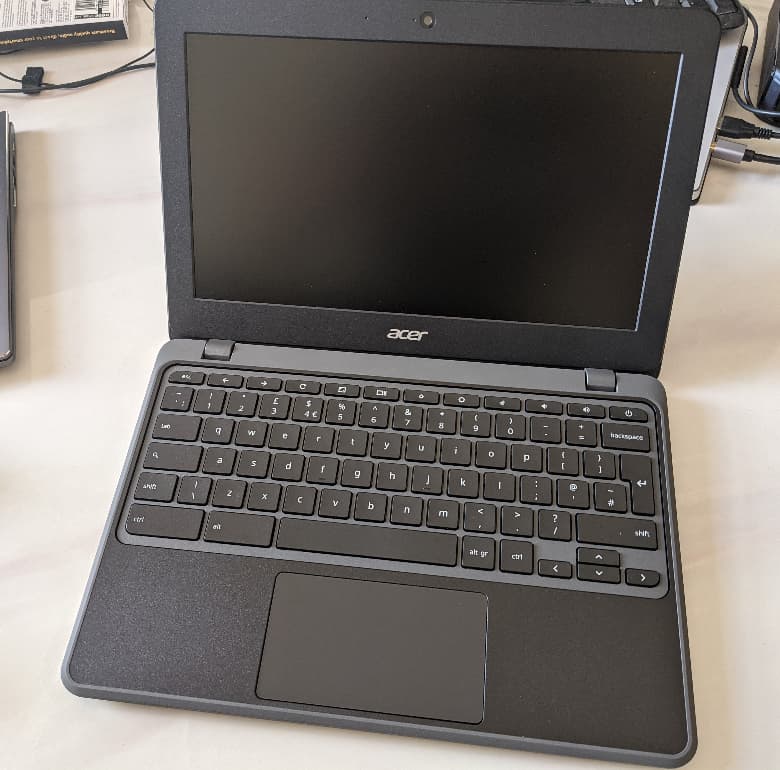 If you’re considering buying a new laptop and you don’t want to spend too much money. Then you may have realised you have more than one option when looking at retailers online. It’s no longer the case that you can only choose from Microsoft and Apple. You now have a third choice and that’s a Chromebook.

If you want a new laptop and don’t want to spend a fortune, I think we can immediately rule out Apple. This means you’re left with two options, which is a laptop running Microsoft Windows or a laptop running Chrome OS. It’s important to remember although a Chromebook may be a relatively new computer. It’s a laptop just like any other laptop you’ve owned. The only difference is it runs using Chrome OS rather than Microsoft Windows.

I’ve used both laptops running MS Windows and Chromebooks running Chrome OS for many years. One thing I do know. When it comes to buying a cheap laptop a Chromebook is a much better option than choosing a laptop running Microsoft Windows. If you want to find out more. Just keep on reading. You’ll thank me for it because buying a cheap MS Windows laptop is a poor decision. I own an expensive Chromebook, but I use my cheap Acer Chromebook when travelling.

All computers need an operating system to run. If you own a laptop and it has no operating system installed. It will sit there in your home and you’ll not be able to use it. The operating system is the most important piece of software your computer uses. It controls and manages everything you do on your laptop.

There are many operating systems out there. Some are easier to use than others. The most popular is obviously Microsoft because they’ve been around for many years. It’s the Microsoft operating system your computers at school possibly used if you’re over the age of 30. Today, most schools use the Chrome OS operating system. Yes, a complete turnaround from where we were ten years ago.

You’ve also got Apple iOS and perhaps one which isn’t as common called Linux. Linux is a great operating system, but it’s also extremely difficult to use for anyone who has never used it before. Linux is arguably one of the safest and most secure operating systems in the world. It’s one of the reasons why some government departments and most of the supercomputers around the world use it.

An interesting thing to know is Chrome OS, which is the operating system for the Chromebook. Is in fact based on the Linux operating system. This is one of the reasons why you may have heard people say Chromebooks are safe and secure. The difference is Chrome OS is extremely easy to use. It’s a win-win.

A driver is software, which is needed to use any type of hardware on your computer. For example, your mouse, keyboard and printer need to have a driver to operate correctly. A Microsoft Windows computer has been created to work with all types of hardware you can possibly think of. The problem with this is all of these drivers need to be kept up to date.

This is one of the reasons why Microsoft Windows updates can cause you all sorts of problems. You can update overnight and realise the next day you can no longer use your keyboard. Imagine that, how would you log in to your computer? This happens a lot more than you’d expect. Updates can cause other issues as well, which you can see from this article from the BBC.

I have a Microsoft Windows desktop PC and after I updated overnight I could not use my mouse or keyboard. I eventually fixed this, but this is only because I come from a technical background. If you don’t consider yourself to be technical. How would you fix such an issue? You’d most likely end up having to take it to a repair shop, which would cost you money. You can see me in this video where I’ve obviously had enough with Microsoft Windows updates.

You need a powerful computer to use Microsoft Windows

This is one of the main reasons why a Chromebook is a much better option if you want to buy a cheap laptop. A cheap laptop with a low performing processor and very little RAM struggles with Microsoft Windows. Partly because of what I’ve mentioned above, but also due to how Microsoft Windows works.

My MS Desktop PC is not cheap. It cost me a lot of money because it’s a gaming machine. It has an Intel i5 processor, 8 GB of RAM and a 6 GB Nvidia Graphics card. I bought this so I could play games with advanced graphics. However, even with a PC with this amount of specs. I still struggle with Microsoft Windows. Starting up my Windows PC can take a long time. Even after I’ve entered my login details and the desktop is showing. It can still take a good ten minutes for the system to load everything in the background.

When you consider this is the case with the high-specs my Desktop PC comes with. You can imagine how worse this would be if you had a cheap Microsoft Windows laptop with a low-spec processor. Also, a Microsoft Windows computer performance deteriorates over time. It may work fine for a few months. However, the more software you install the more this causes Microsoft Windows to become sluggish.

The great thing about Chrome OS is that it’s super-fast, secure and easy to use. When they were first launched in 2011 it was true you couldn’t do much more than surf the internet and use online software. However, fast forward to 2021 and you can do so much more on a Chromebook.

You would expect all of these updates to the operating system and extra functionality to slow down Chrome OS. This is not the case. Sure, it may take a minute or two longer for updates compared to when they were first launched. However, Chrome OS updates happen in the background and are completed in less than three minutes. A Microsoft Windows update can take over an hour.

When it comes to using a Chromebook. At first, you may find it a little different if you’re used to a Microsoft Windows computer. It only takes a couple of days to get used to how it’s different. Unlike an MS computer where you need to install programs. On a Chromebook, you can do most of what you want via the internet. Also, you can install Android and Linux apps if you need more than what you can achieve online.

The one thing you will notice is that it’s incredibly fast and very easy to use. It does not matter whether you’ve had your Chromebook for a couple of weeks or a couple of years. It will perform exactly the same as it did from the day you bought it. This is why I love the Chromebook. Because Chrome OS is lightweight means you don’t need a super-powerful computer to get the most from using a Chromebook.

A cheap Microsoft laptop will fail you

This is why you are much better off buying a Chromebook rather than a Microsoft laptop when you don’t want to spend a lot of money. You can get your hands on a cheap Chromebook for less than £200/$200. You can also get a cheap Microsoft laptop at the same price. The difference is the Chromebook will perform a lot better because Chrome OS is not a demanding operating system.

Of course, if you want to take advantage of everything the Chromebook can offer. Then you can spend a little more than this. By doing this you’ll have a nicer looking laptop, possibly a touchscreen for Android apps, and even a Hybrid to allow you to use it as a laptop or a tablet. Add a decent IPS panel to all of that and you’re still only talking around £350/$350. If you spend that much on a Microsoft Windows laptop. I can assure you no touchscreen or Hybrid device would be in your price range.

I appreciate this post is more pro Chromebook than Microsoft. However, I’ve used both of these operating systems for many years. I like to support the operating system that allows everyone to use technology easily. For me, this is really important. I strongly believe everyone has the right to have access to the internet. The issue is, if you buy a cheap Microsoft laptop you’ll be dealing with issues more than you’ll be surfing the internet. If you buy a cheap Chromebook you’ll not be dealing with any issues and spending your time doing what you want.

My mum is in her eighties and I know she feels a little left behind when it comes to technology. She wants to use the internet because it’s easier for food shopping. She used to have a Microsoft laptop and she had nothing but issues. I got her to switch to a Chromebook a couple of years back, and she said it was the best thing she ever did. She can now use a computer without having to deal with problems and without needing to be a computer expert.

For me, that’s a really important thing. Technology is about giving access to everyone. It isn’t about making it difficult or hard to deal with when things go wrong. If you want a cheap laptop to get on with what you bought a computer for in the first place. Then a Chromebook is a much better option than a Microsoft Windows laptop. There is simply no contest.