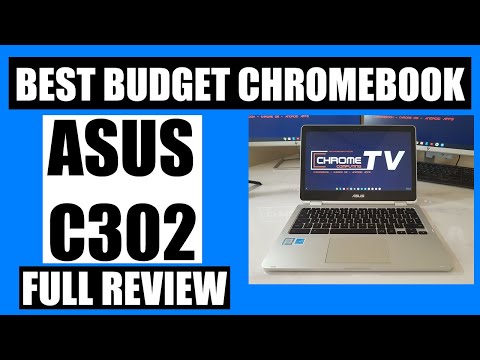 Think back a couple of years and the Asus C302 was one of the most popular Chromebook devices. Since then we’ve seen a pretty large number of new devices become available, and the Asus C302 has slowly lost its popularity.

However, there is still a place for the Asus C302 and that is sandwiched between all the budget Chromebook devices and the mid to high-spec devices.

This makes perfect sense because the C302 was never seen as a budget device. It still isn’t but you can now pick it up at a much cheaper price.

Budget Chromebooks are great for people who want to get access to a laptop without spending too much money. Let’s not forget it was budget devices that made the Chromebook succeed in the early years.

Just like most people, I love a good bargain, but I’ve always been put off most budget Chromebooks because of the build or specs. There are of cause a few exceptions to this, but generally speaking, it has no competition from the budget sector.

When you buy a budget Chromebook you need to sacrifice on something. It’s usually the build, performance or display. Most people accept that you cannot have everything when shopping on a budget, but maybe you can.

THE ASUS C302 IS THE NEW BUDGET CHROMEBOOK

Just writing the headline for this paragraph felt odd. As previously mentioned there was a time when this Chromebook was at the top. We shouldn’t be too sad about it though because it means Chrome OS devices are continually improving.

Also, it means you can now get the Asus C302 at a much cheaper price than it was previously. This makes it the perfect choice for someone shopping on a budget.

There isn’t anything you are sacrificing either because the C302 is still a fantastic Chromebook. It comes with Android Apps, which work perfectly with the 4GB of RAM and 64GB of storage.

The performance is also fine with the Intel M3 processor inside. I’ve owned this device personally for a couple of years and never had any issues from the performance.

It’s a Hybrid, so it can be used in both laptop and tablet mode and works perfectly in other setups as well.

If you’re looking to buy a budget Chromebook in 2020, then you should definitely consider the Asus C302. Unlike most budget Chromebooks there are no immediate downfalls when buying this device.

It looks smart, performs well and did not become one of the most loved Chromebook devices for no reason. The only real competitor from the budget range of Chromebooks is the Acer 14-inch CB514.