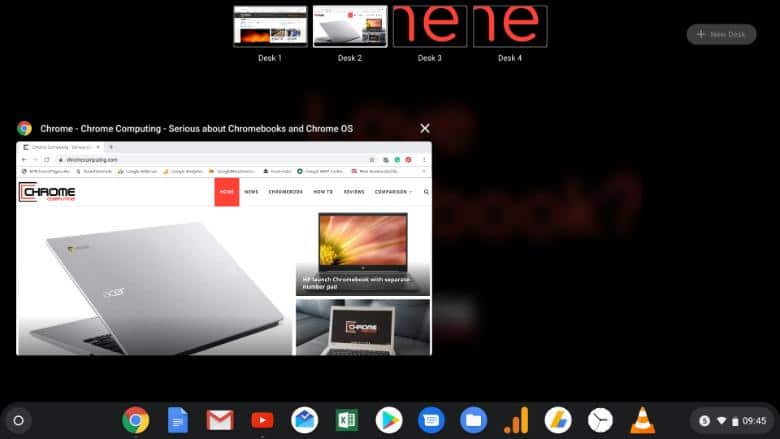 So I’ve been eagerly waiting for Virtual Desk for the Chromebook. Virtual Desk will allow you to have up to four separate desktops open on your Chromebook at any one time.

There has been news that they will be available on Chrome OS 76. However, neither my Chromebook or Chromebox had the option available by default.

I’m hoping the fact that they are not available by default means Google is still working on the Virtual Desk functionality. If this is the case, we should hopefully see Virtual Desk come as standard on Chrome OS 77.

THE BENEFITS OF VIRTUAL DESKTOPS

The great thing about Virtual Desktops is that you can separate your work. This is really useful if you use your computer for work and play. It’s really easy to get distracted during the day when working. You could be working on a spreadsheet but also have Facebook open in the background.

Having your work windows and play windows open on the same desktop makes it too easy for you to get distracted from your work. By using Virtual Desktops you can separate your windows, which really does help you separate your work from play.

I’ve just added Virtual Desk on my Chromebox and it did not work well at all. In fact, rather strangely, when I entered a field that needed me to type. An on-screen keyboard appeared on the screen. I don’t have a touchscreen setup for my Chromebox, so really unsure why this happened. It has nothing to do with virtual desktops either, so I’ve disabled it for now.

I then installed Virtual Desktop on my Chromebook. It appears to be working fine at first. When you’re at the desktop you swipe down on the touchpad with three fingers, and it gives you the ‘New Desk’ option at the top right of your screen.

IT PARTIALLY SEPARATES YOUR WINDOWS

I opened a Chrome browser on my desktop and visited Facebook. I then created a new desktop and opened this website Chrome Computing. However, I would expect both Facebook and Chrome Computing to now be on separate desktops but this does not appear to be the case.

If you swipe down on three fingers, then it does show you the windows you have open on that particular Virtual Desktop. However, I generally use the icons on the bottom shelf to move from one window to another, and this is where the problem is.

If you use the icons from the bottom shelf, it shows all of the open windows for that particular Icon. So even though I had Facebook and Chrome Computing open on separate Virtual Desks. When clicking on the Chrome icon it showed all the Chrome Windows across all Virtual Desks.

I’m hoping this is a glitch that will be worked on. As this is not how a Virtual Desktop should work. The whole idea is that you can separate your work.

I’ll be keeping an eye on this and see whether Virtual Desks are automatically enabled with the Chrome OS 77 update. Once it’s running how it should I’ll be able to do a ‘HOW TO GUIDE’ for Virtual Desk on the Chromebook.