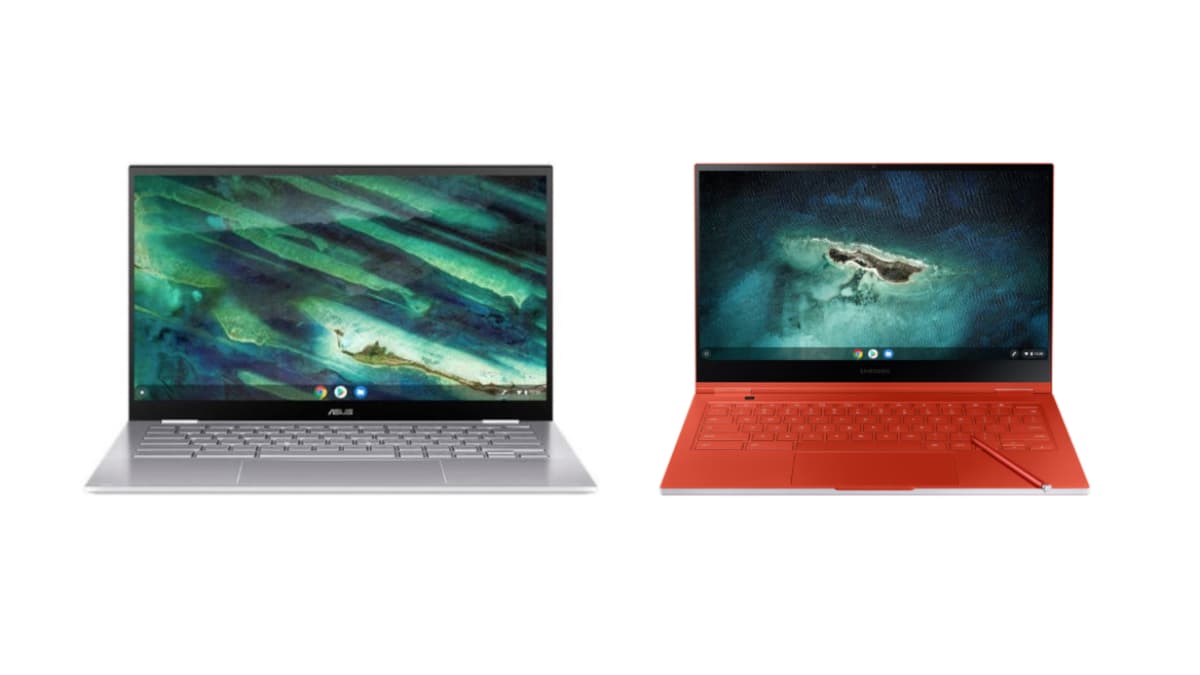 Over the last couple of years, we’ve seen a real change in Chromebooks. You still get plenty of budget laptops to choose from but a new high-spec range has started to appear.

Don’t get me wrong. We’ve had high-spec Chromebooks for a while but they were usually provided by Google with the Pixelbook range of laptops. Now more manufacturers are offering high-spec laptops.

This is great if you want the best internals you can buy. Having more choices when buying a laptop is a good thing, but it can make it difficult to make that final buying decision. Find out more about the latest Chromebook from Google, the Pixelbook Go and the different configurations available.

So let’s take a look at two of the newest high-spec Chromebooks to be released recently. We’ll look at which one is going to suit you best. You’ll be spending a lot of money on these computers, so you’ll want to make the right choice.

When it comes to the look of these Chromebook devices they could not be further apart. Asus has kept with its traditional classic look with a silver finish. Samsung has offered a look never seen on a Chromebook before.

If you want a Chromebook that stands out from the crowd then the Samsung Galaxy Chromebook is the obvious choice here. The red chassis will make heads turn. Although it’s now available in a more conservative grey if the red is too much.

Although the Asus C436 is well built it simply cannot compete against the build quality of the Samsung Chromebook. Don’t get me wrong it’s a well built and nice looking laptop, but it lacks any personality compared to the Samsung.

Unlike previous Asus laptops, it does not come in aluminium. Instead, Asus has opted for magnesium, which is a much lighter metal than aluminium. This is good to see because you’re getting a 14-inch laptop weighing just 2.4lbs / 1.1kg.

It’s lighter than any previous Asus Chromebook but is still slightly heavier than the Samsung. It’s also thicker at a whopping 13.7mm compared to the 9.9mm you get from the Galaxy Chromebook.

The Samsung Galaxy Chromebook currently comes with one processor type, which is the Intel i5. The Asus C436 is available in i3, i5 and i7 versions. I’ve compared using the specs of the Asus C436 i5 version.

The Samsung Galaxy Chromebook and the Asus C436 uses the same tenth-generation i5 quad-core processor. The processor boasts a base speed of 1.60 GHz and a turbo speed of 4.20 GHz. So make no mistake both devices will perform extremely well and it’s all the power you’ll need on a Chromebook.

A massive 6MB cache is used with the processor compared to the standard of 4MB. This means regular tasks your processor performs will be carried out at extremely fast speeds. This helps to improve the overall performance. Find out more about the processor you should be looking for when buying a Chromebook.

Performance Winner: Both the Asus C436 and Galaxy Chromebook are equal

I’ve continued to compare the Asus C436 i5 model when looking at the RAM and storage. The i3 model and i7 model may offer different RAM and storage options.

Both the Samsung Galaxy Chromebook and the Asus C436 has 8GB of RAM. This is more than enough RAM for any task you’ll want to carry out on a Chromebook. This amount of RAM is perfect whether you’re using Chrome OS, Android apps or Linux.

It’s the same with the storage with both devices offering 256GB. When you consider a lot of work on a Chromebook can be saved in the cloud. This is a huge amount of storage space for a Chromebook. Unsure how much storage you need for a Chromebook?

RAM & Storage Winner: Both the Asus C436 and Galaxy Chromebook are equal

This is where things get interesting because both devices offer something completely different. This means the display is one of the factors to compare when choosing between these two laptops.

The Asus C436 comes with a 14-inch Full HD display, which provides a resolution of 1,920 by 1,080 resolution. You get great viewing angles and you get those lovely thin bezels that we’ve come to expect from Asus.

The Samsung Galaxy Chromebook offers a display, which is far more impressive than the Asus C436. It’s a little smaller in size at 13.3-inches. I prefer laptops in the 13-inch range because they still offer a big enough screen without taking up as much room. So you get a more compact laptop, which is perfect when out and about travelling.

The display is AMOLED, so we are talking beautiful rich colours and you’ll have no issues with viewing from an angle. It’s a far superior display panel than the Asus C436.

The resolution is also more impressive because it offers 4K. This type of resolution on a laptop means you’re going to get insanely sharp images and text. You could argue it’s a tad overkill for a laptop. Find out more about the display you need for a Chromebook.

The Samsung Galaxy Chromebook display is very bright indeed. It’s unlikely you’ll ever need to use the max brightness. However, it’s great to know you’ve got the extra brightness available if you’re working in direct sunlight.

The Asus C436 and Samsung Galaxy Chromebook are virtually the same price. Samsung doesn’t make laptops in Europe anymore. So you’ll only be able to get it if you live in the USA.

I really cannot recommend the Asus C436 against the Samsung Galaxy Chromebook when the price is almost identical. In fact, I’m struggling to see why Asus is not lowering the price.

It’s a difficult situation though because although the Samsung Galaxy Chromebook is clearly a better device. The display is so good that it has caused issues with battery life.

If we put the battery life concerns to one side though. The Samsung Galaxy Chromebook is extremely well built, super sexy and has a display to die for.

If you’re put off by the battery life due to the screen. I still would not recommend the Asus C436 because it’s shockingly over-priced in comparison. You’d be much better off looking elsewhere if the Samsung Galaxy Chromebook isn’t right for you.