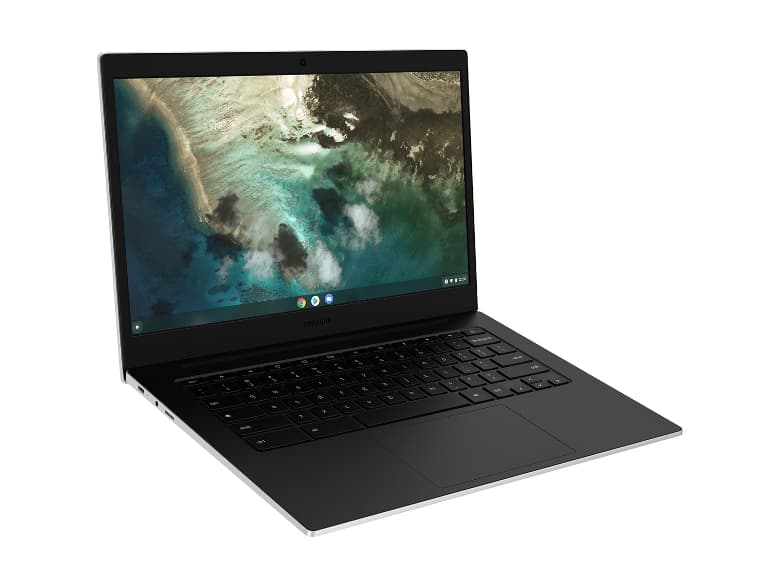 The Google PixelBook Go has been a great success, which is no surprise when you consider the excellent build quality and performance. It has what some may consider flaws, which is not offering a Hybrid design and no Micro SD slot. Put that to one side though and the PixelBook Go is still the laptop of choice for many. It’s perfect for anyone looking for a laptop to use on the move.

Samsung has decided to launch a Chromebook in the USA named the Galaxy Chromebook Go. Personally speaking, I think it’s a tad cheeky because it’s using the Go name to ride on the back of the success of the PixelBook Go. I wouldn’t mind too much but the laptop from Samsung offers specs that are far less attractive.

This is a really strange marketing decision from Samsung. If any manufacturer could create something that was as good as the PixelBook Go it would have been Samsung. If they wanted to use the ‘Go’ badge surely they could have offered something similar or even better than the Pixelbook Go. All that said, let’s take a look at what it offers.

The first thing you’ll notice is the display is a huge 14-inches. I say huge because a laptop with a display of this size is hardly a laptop you can use easily when out and about. It gets even stranger because Samsung has opted for the Standard definition of 1,366 by 768. This resolution is perfectly acceptable on a laptop with an 11.6-inch display. It’s not acceptable on a display of 14-inches. A 14-inch display with a standard definition looks horrible.

It’s a laptop rather than a Hybrid, which is the same as the PixelBook Go. I personally think people would have liked to have seen a Hybrid Chromebook, which was perfect for using on the move. That being said, a hybrid design on a 14-inch laptop isn’t very practical in reality. It may be fine at home, but it just doesn’t work when you’re out and about. This is why I would have preferred it if they went for a smaller display offering Hybrid functionality.

From what I can see it doesn’t come with an IPS panel either. Again, this is a big letdown, and on top of this, it does not have touchscreen capability. To make the most out of Chrome OS touchscreen is a much better choice because it means you can use all of the Android Apps without any limitations.

It’s when you get to the performance you can see this is a budget entry device. Nothing wrong with that of course because many people buy budget Chromebooks. It comes with an Intel Celeron processor with a base speed of 1.10 GHz and a turbo speed of 2.80 GHz. You get 4GB of RAM, which is more than enough for the processor used. Also, 4GB of RAM is still perfectly acceptable for everyday use. Find out more about how much RAM you need for your Chromebook.

Storage options are available in either 32GB or 64GB options. The 32 GB is a tad too small for anyone looking to install plenty of Android Apps. If you’re not that interested in Android Apps then this amount of storage is fine. This is because you should be saving most of your files in the cloud using Google Drive. If you will be using more Android apps then the 64GB option is the better choice.

Who would buy this Chromebook

Apart from the name Samsung has decided to use, which I think is a pretty cheap way of making people believe this laptop is similar to the PixelBook Go. You may be interested in owning this laptop if you’re not too fussed about owning a high-performing laptop. It will easily cope with internet surfing, streaming movies and using social media. You’ll also be able to take advantage of Android apps, as long as they don’t need a touchscreen to work.

When it comes to looks. There is no denying the Samsung Galaxy Chromebook Go does look the part. It’s just a shame they’ve decided to use a standard definition on a 14-inch laptop. They’ve opted for looks over anything else. It’s a real shame because I think they could have offered a whole lot more.

If you want to know more about what the Samsung Galaxy Chromebook Go offers. Take a look at the spec page on the Samsung website.

1 thought on “Samsung Galaxy Chromebook Go is no PixelBook Go”