Samsung Galaxy A41 vs Galaxy A71 – Phone Comparison 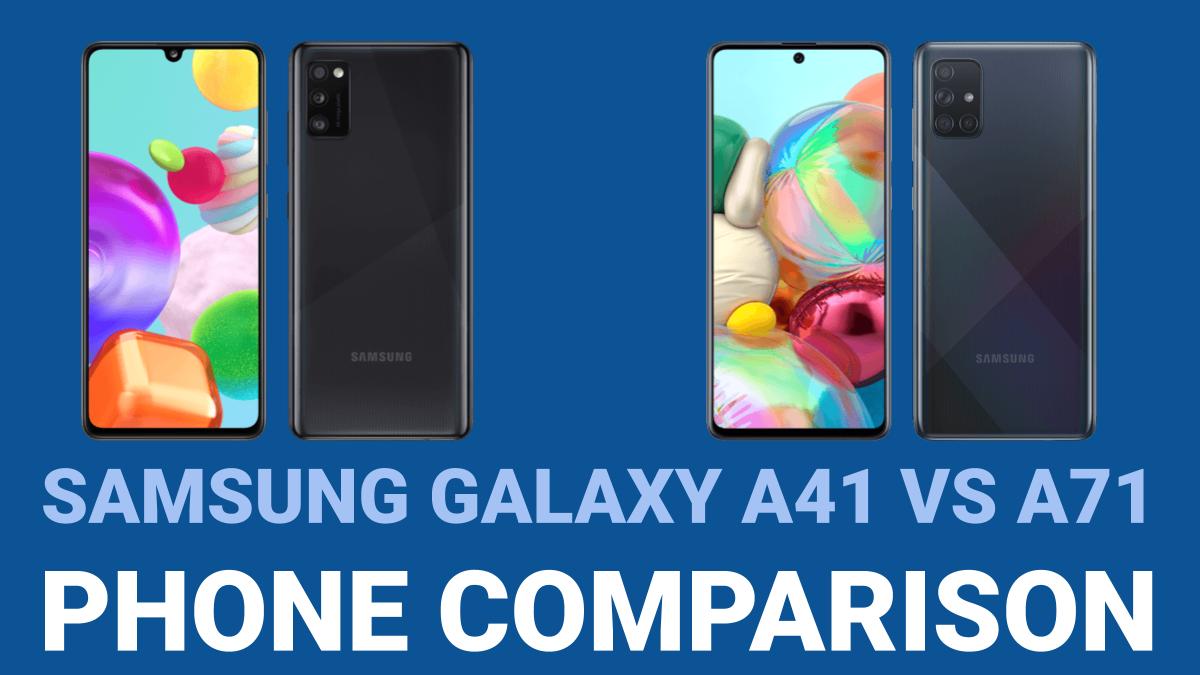 Choosing a mobile phone can be difficult because you have so much choice. One manufacturer known for making great phones is Samsung.

Over the last couple of years, we’ve seen many people move away from high-priced phones in favour of mid-priced phones. You’re essentially getting the best of both worlds when you buy a mid-priced phone because they still offer great specs at half the price. Sure, they may not have the same premium build and little extras, but you’d be surprised just how good mid-priced phones are.

Samsung has realised this is a new market for them, so they’ve been launching a lot of mid-priced phones in the last couple of years. Two of these phones are the Galaxy A41 and the Galaxy A71. The latter is a newer model, so it obviously has better specs. The question is how better are these specs compared to the A41.

If you’re looking to buy your next phone and narrowed it down to these two phones. Then read on to find out, which one is more suitable. The Samsung Galaxy A41 or the Galaxy A71 in this direct phone comparison.

Both the Galaxy A41 and A71 are made of plastic on the back while the front is used up completely by the glass display. The word plastic can put people off, but neither of these phones looks cheap. Most phones, which are not high-spec flagship phones use plastic. The one good thing about plastic is that it helps to keep the weight of the phone down compared to glass backs or metal.

At first glance, it’s very difficult to see any difference between these phones as they look very similar. The A71 is the larger of the phones because it has a larger display, but is slightly thinner than the A41 at 7.7mm compared to 7.9mm. As you’d expect the A41 is slightly lighter too at just 152g compared to 179g from the A71.

If you were comparing these two phones on the build and looks alone. Then there isn’t really much to compare. The fact both phones are made by Samsung and released not too far apart. Means the design and build of both phones are near identical apart from the difference in display size.

The Galaxy A41 comes with a MediaTek MT6768 processor with a base speed of 1.7 GHz but is capable of 2.0 GHz when extra power is needed. It’s an Octa-core processor, which means it has 8 cores, which in English means it’s pretty fast. It also comes with a 2MB cache, which makes regular processes perform much quicker.

The Galaxy A71 uses a Qualcomm SM7150 processor with a base speed of 1.8 GHz but can offer a turbo boost speed of 2.2 GHz if needed. Again, like the A41 it’s an Octa-core processor but has a slightly higher clock speed. However, it only comes with 1MB cache, so half the amount of the A41 to help regular processes perform faster.

Although we all want a phone that performs well. It’s important to not get too caught up with the tech jargon surrounding processors. Both of these phones use processors, which are more than capable of dealing with anything you’ll throw at it. Whether that is social media, streaming HD movies or using Android apps.

The Galaxy A71 does come with a slightly faster processor, but the difference isn’t dramatic enough to choose this phone over the A41 on performance alone.

RAM is another important factor when it comes to how your phone will perform. You can have the best processor in the world, but if there isn’t enough RAM to support it then you’ll notice. Luckily, Android uses RAM in a totally different way to how a computer uses RAM. So it’s unlikely your phone would stop working if it was low on RAM, but it would slow down dramatically. Find out more about how much RAM you need for your Android phone.

The Galaxy A41 comes with 4GB of RAM, which is more than enough for most of us. You’ll have no problems using social media, streaming movies, surfing the internet or using Android apps. You’ll also be fine if you like to play Android games, but if you’re a serious gamer the A71 with 6GB of RAM may be more beneficial.

The extra 2GB of RAM you get on the Galaxy A71 will be more noticeable when it comes to playing Android games. You’ll also notice the phone will take less time to switch from one app to the next with 6GB compared to 4GB. That being said, at the moment 4GB of RAM is still perfectly acceptable for a phone.

Using a phone with 64GB of storage isn’t really going to cause you any issues. Especially in the first six months. However, if you like to install a lot of Android apps or download a lot of music on your phone to save on data when not at home. Then having the extra storage may come in handy.

One thing that does take up a lot of storage space is videos. If you like to shoot a lot of videos on your phone to upload to social media. Unless you’re happy to delete these videos once uploaded. Then you’ll definitely feel the benefit of having the 128GB of storage compared to the 64GB. Find out more about how much storage you need for an Android phone.

The display is really important when it comes to any mobile device. Whether you’re using a tablet or a phone buying one with a poor display is something you’ll want to avoid.

The good news is when it comes to displays Samsung knows what they are doing. So both the A41 and A71 offer excellent displays. The main difference is the size, as the A41 comes with 6.1-inch display compared to a larger 6.7-inch display you get from the A71. This alone may help you decide which is best for your needs. If you don’t want a large phone because you think you’ll struggle to hold it in your hands. Then the A41 is most likely going to be the better option.

Both phones come with a beautifully stunning Super AMOLED display, which Samsung are well known for. The resolution on both phones is also the same at 2,400 by 1,080, which means both are capable of streaming HD movies, which need 1,920 by 1,080 resolution.

There isn’t too much to get concerned about when it comes to comparing the displays. The Super AMOLED display, which both phones offer with the same resolution means they are near identical.

You could argue the A41 would offer slightly better images and crisper text because you’re fitting all those pixels into a smaller display. That being said, when you are talking about the display size difference of just 0.6-inches. It’s very unlikely you’d be able to notice any difference due to this.

The only thing you really need to consider about the displays on offer is the size. What size phone best suits you. When it comes to the quality of the displays both the Samsung A41 and A71 are almost identical.

As more of us use social media to upload photos and videos, so as the need to buy a phone with a decent camera. You can really tell the difference between the quality of photos, which is why phone manufacturers are offering better cameras all the time.

This is where these two phones differ quite a bit. Don’t get me wrong both phones offer great cameras, and you’ll not be disappointed with either. However, the Galaxy A71 comes with much better cameras than the Galaxy A41.

The Galaxy A41 front-facing camera, which is mostly used for taking selfies offers 25-megapixels. Considering the cameras we had in our phones just a couple of years ago this is a huge improvement. However, even a phone with 13-megapixels can take a decent pic, so some might think the extra megapixels are not needed.

The rear camera offers even more with 48-megapixels and comes with an additional two rear cameras to help capture more detail and to offer ultra-wide camera shots.

The A71 phone goes a step further with a front-facing camera offering 32-megapixels and a rear camera capable of a whopping 64-megapixels. Unlike the A41 the A71 comes with an additional rear camera, so you’re getting four rear cameras in total. This additional camera allows even more detail when taking photos of objects close up.

It can be confusing when choosing a camera on a mobile phone. Since 2019 we’ve seen a number of phones being released offering more than one rear camera.

The reason for this is because more people today are interested in showing off to the world some of the great things they get up to. Whether you’re on holiday or just out shopping. Whenever we get an opportunity for a photo opportunity we take it. These are then uploaded to social media. Everyone wants photos that look great whether it’s a selfie or a photo showing the scenery around them.

The extra megapixels means better quality pictures. This becomes more noticeable when viewing these photos on larger displays such as your living room TV or computer monitor. The idea of offering more than one rear camera may sound like a gimmick, but it does offer you more choices when taking photos.

However, it really does depend on whether this is important to you. Even taking into consideration that you want your photos uploaded to social media to look great. Whether you are using the camera on the A41 or A71 both will take great photos.

It becomes more important if social media and taking photos is really important to you. If you love to show off photos of when you’re on holiday, and you want your photos to look the best they possibly can. Then the A71 offers a much better camera than the Galaxy A41.

When it comes to comparing the Galaxy A41 and A71 phones you need to take a couple of things into consideration. It’s all too easy to think about performance, RAM, storage and display quality. This is absolutely fine to do when comparing phones offering something completely different.

However, comparing these two phones on the specs alone comes to one conclusion only. The A71 does not offer specs, which are dramatically different from the A41 to warrant a much higher price tag. So if the price is important to you, the A41 performance and display offering are almost identical to the A71.

The main difference between the two phones is the display size, which is an important factor when buying a phone. Do you want a large display or a slightly smaller one, which helps to make the phone more compact? A pretty easy decision to make, and it all depends on what is right for you.

The cameras also separate these two phones from each other. Not to the extent that it is a dramatic difference for the everyday user. However, if you want the best quality photos you’ll be happier with what the A71 offers compared to the A41.

Whichever phone you decide to buy. I’m sure you’ll be happy with your decision, as both of these phones are great. It all comes down to your budget the size of the phone you want and whether having the best possible camera is important to you.