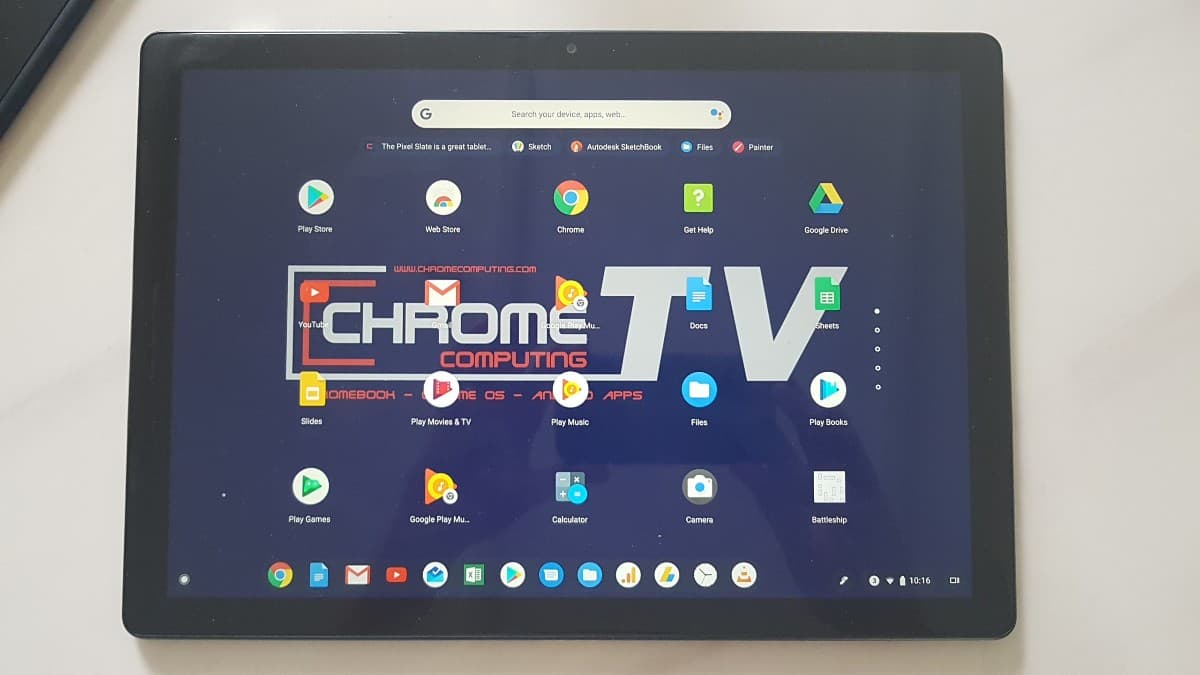 Since then Chrome OS has received vital updates and tablets now work fine with the Chrome operating system. This has seen a new interest in Chrome OS tablets with the Lenovo Chromebook Duet.

What about if you’re looking for a high-spec Chrome OS tablet without any compromises? Well, could the Pixel Slate offer everything you need? Find out in this Pixel Slate and Brydge Keyboard review.

It may appear a little strange reviewing the Pixel Slate in 2020. However, it makes perfect sense. If you’ve been interested in the recent news about the Lenovo Chrome Duet. Then you have an interest in Chrome OS tablets.

Chrome OS tablets have the potential to be just as large as the Chromebook. They offer a totally different type of versatility. The Pixel Slate offers everything you could ever need from a tablet and more. Also, it will receive Chrome OS updates until June 2026, so that’s six years of updates.

I could not let the Pixel Slate slip away without first reviewing it. I was not overly convinced about Chrome OS being ready for the Pixel Slate in 2018. However, now Chrome OS has received the updates needed for tablets. The Pixel Slate offers everything you could ever want from a high-spec tablet.

When it comes to build quality you cannot get much better than what is offered by the Pixel Slate. It comes in a midnight blue that just looks so cool and elegant from the moment you set eyes on it.

It’s a totally minimal design, which is something I’ve come to expect from Google. Maybe not to everyone’s taste, but minimal to me definitely equals ultra-cool. The only way you can tell it’s made by Google is by a small ‘G’ sign on the back in the top left corner.

The front of the tablet is completely glass, which curves at the edges to provide a totally smooth design. You’ll not find any rough edges on this device. In fact, the build quality is outstanding and you immediately know you have a premium product in your hand.

I also like the fingerprint scanner, which doubles as the power button. This makes it much easier to access the tablet when locked than typing a password. Perfect for when using it as a tablet without a keyboard attached.

The only real criticism is that it does feel a tad heavy for a tablet, but maybe that is a little unfair. The aluminium casing adds a bit of class to the Pixel Slate, so it’s going to weigh more than a tablet with a plastic design. Also, the 12.3-inch display is much bigger than most tablets, so the extra weight is justified.

At just 1.6lbs/0.72kg it’s definitely lighter than any Chromebook. However, it does increase in weight when you attach the Brydge keyboard.

The Pixel Slate model I chose to review came with the M3 processor. The reason for this was to see if the base model was powerful enough compared to the higher-priced Intel i5 and i7 models.

Well, just as I had thought. There is absolutely nothing wrong with the performance provided from the M3 processor. Don’t get me wrong, of course, you’ll get better performance from the i5 and i7 models. However, I would not pay the extra money unless you really need that extra power.

I had to update the tablet a few times because it was originally sitting with a Chrome OS version of 71 or 70. I’m not 100% sure, all I know is that after the first update it was on version 72, so it most likely started on 71 or 70 but I forgot to take a look before the first update.

Once it updated to it’s latest version of Chrome OS, which is currently Chrome OS 83. I found no problems whatsoever with the performance the M3 Pixel Slate offered.

Whether that was playing Android App games, streaming HD movies, internet surfing and multi-tasking. The fact is the eight-generation M3-8100Y processor copes with all of these with ease.

It’s a dual-core processor with a base speed of 1.10 GHz but is capable of reaching turbo speeds of 3.40 GHz. It also comes with 4MB cache, which just helps speed up regular processes.

I wasn’t convinced about the M3 processor, but it can definitely perform well enough for what most people would want from their Chrome OS tablet.

The entry-level model comes with 8GB of RAM. This is more than enough RAM for what you’ll need now and in the future. I was worried the 8GB might have been too much for the M3 processor.

However, I had no problems with this during a couple of weeks of using the Pixel Slate. This may be down to the fact that the M3 processor was designed to work with up to 16GB of RAM, so no bottlenecking here.

It supports both Android and Linux Apps, so having that extra RAM is definitely an added bonus. At the moment 4GB of RAM is more than enough for most tasks. If we do start seeing more Linux Apps in the future though; I’m sure you’ll be happy with the extra memory that comes as standard on the Pixel Slate.

The M3 Pixel Slate comes with 64GB of storage. This is enough for installing quite a lot of Android Apps. However, if you want more storage you’ll be happy to know the Intel i3 offers 128GB and the Intel i7 offers 256GB. You’ll obviously have to pay more for these models though.

The Pixel Slate display is simply amazing. This is thanks to the Molecular display technology and the offering of 6 million pixels.

It does not really matter what you’re doing on the Pixel Slate. The one thing that you’ll always notice is just how amazing the display is. Start streaming HD videos on YouTube and they just come to life.

Put on a movie from Netflix and you’ll be pleasantly surprised with just how good the display of the Pixel Slate is. You can get reflections from the glass screen, but the display is really bright. I never needed to use it at the highest brightness level.

It does have slightly large bezels around the side if comparing to the iPad Pro. However, they are not big enough to put you off the rest of what the tablet offers. Also, the display is so wonderful to look at you soon forget about the bezels.

I was really impressed with the sound quality. It’s unusual for me to watch a movie on a laptop or tablet without reaching for the headphones. However, I had no problem at all watching a movie through the Pixel Slate speakers.

This may be because they are both front-facing and are located on either side of the tablet when in landscape mode. This helps with the separation of the stereo channels and the sound is more than loud enough for movie watching.

When it comes to music you can easily listen to music on the Pixel Slate without being disappointed. The only real criticism is the speakers are slightly tinnier than I would have wanted. A little extra bass would have been nice, but don’t for a second take that as me not being very impressed with the overall sound quality.

The great news is that the Brydge keyboard works with the Pixel Slate really well. You simply hold down the Bluetooth key for about three seconds and it instantly connects to the Pixel Slate.

It also looks the part as well, as the back of the keyboard offers the same midnight blue and aluminium design you get from the tablet. So you can instantly tell this keyboard was made specifically for the Pixel Slate.

It took a whopping six hours to charge the keyboard. You can tell when it’s charging because the red light is indicated on the power button. When it’s charged the red light disappears. At one stage I thought it may never fully charge.

However, I was not put off too much after finding out those six hours of charging means the keyboard will not have to be charged again for another six months. That’s working on the basis of using it for two hours each day, so you can’t really complain when it can hold that much battery for such a long time.

The keys are responsive and I had no problems typing on the Brydge keyboard. I also really liked the feel and responsiveness of the touchpad. It’s a backlit keyboard and has three different levels of lighting, so you’ll easily find a setting to suit the darkness of your surroundings.

When it comes to ports Google has decided that less is more. This isn’t a bad thing because it helps to keep the minimal design that you’ll end up loving about the Pixel Slate.

You’ll find a USB Type C port on either side of the tablet, which can be used for charging or connecting an external display to the Pixel Slate.

You’ll also find an adapter, which allows you to connect a pair of headphones should you wish. However, most of us today tend to use Bluetooth headphones, so it may not be needed. It’s nice they decided to include the adapter though for anyone who prefers a wired headphone connection.

The pen I purchased separately and it uses the same one as the Pixelbook. I was really happy with just how seamless it was to pair the pen with the Pixel Slate.

It’s simply done by touching the display with the pen. Almost immediately you’ll find an extra menu option at the bottom left near the time. This provides a variety of options such as screen capture and a link to note taking.

I’ve used the pen with a few different applications and it works perfectly fine. It uses a AAAA battery. I’m pretty happy about that because these batteries are really easy to get at your local convenience store.

The pen definitely adds extra versatility to the Pixel Slate. In fact, I’ve come pretty attached to it. I’ve suddenly found my inner-artist; although, I’ll happily admit I’m not that good. I do, however, enjoy sketching on the Pixel Slate when I’ve got some time on my hands.

If you love Chrome OS but prefer a tablet over a Chromebook. Then the Pixel Slate is a perfect choice if you’re wanting a high-spec Chrome OS tablet. Chrome OS has come on massively when used in tablet mode, so make sure if you buy one you get through the updates first. Once updated, you’ll be really happy with the functionality in both tablet and laptop mode.

The build quality is outstanding, which is what you’d expect from Google. It’s still got over six years of updates and you can get your hands on one at really decent prices.

This is definitely the tablet you should be considering if you want to add a bit of class to your lifestyle. It works great as a tablet and just as good in laptop mode. In fact, as soon as you attach the keyboard. You’re left with a Chromebook with a really good display. There isn’t any compromise here at all.

I’m really happy with what the Pixel Slate offers. In fact, I think it will be one of those products that will become iconic. I’d get your hands on one now while you still can. You’ll be blown away with everything it has to offer.