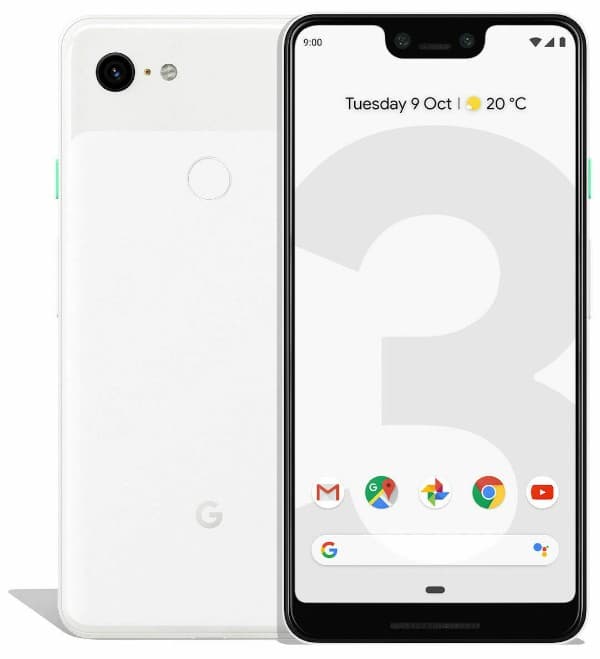 The Pixel 3 has been around for a few years now. In fact, it’s been around long enough to be replaced by the Pixel 4. However, that does not mean this phone still isn’t a great buy.

The Pixel 4 is good, but it lacks some features that the Pixel 3 offers. Therefore, if you’re considering buying a new mobile phone. You should definitely consider the Pixel 3 because it still offers fantastic specs.

So let’s take a closer look in this Pixel 3 mobile phone review. We’ll look at what makes the Pixel 3 such a great phone. If you’re looking for a cheaper phone than the Pixel 3? Then why not read the review of the Pixel 3A.

The Pixel 3 is a well built cool looking phone. It’s premium to look at and to touch. This is thanks to the premium corning gorilla glass used on the back. The top quarter of the back is shiny and below that the glass has a matte finish. This really makes the phone stand out from its rivals.

I love phones that are easy to hold in one hand and the Pixel 3 is just that. Unless you like your big screens, you’ll be happy with the compact size of the Pixel 3. It uses the same glass on the front of the phone as it does on the back. Protecting the glass is an aluminium frame.

Its curved edges also make it comfortable to hold for long periods of time. The phone weighs in at just 148g and is just 7.9mm thick.

So most of the casing of the phone is glass, apart from the aluminium frame around it. This really does give the Pixel 3 a nice look that is not seen on any other flagship phone.

One nice feature of the Pixel 3 is the way you can use Google Assistant. Instead of a dedicated button on the phone, you can squeeze the frame of the phone. This automatically brings up Google Assistant and is a pretty cool feature.

It’s available in black, not pink and clearly white. It’s difficult to say, which is best because everyone will have their own opinion on that. Personally, I like the white version best, but it’s good to see you have different options.

The speakers also give out a good sound, and this is thanks to them both being forward-firing.

When you consider the Pixel 3 is a couple of years old now. It’s still a phone that can perform just as good as many others. Sure, it cannot perform against the latest flagships of 2020, but make no mistake this is a phone that can still perform.

This is thanks to the Qualcomm Snapdragon 845 chip used inside. It will easily handle anything you can throw at it with ease. Whether that’s internet surfing or using the latest Android apps.

It may be a couple of years old, but this phone can definitely still perform.

The phone comes with 4GB of RAM. Back in 2018 this amount of RAM was the gold standard. Today, some may feel that 4GB is not enough. This is because you can now get phones with 6GB or even 8GB of RAM.

However, I’m not that convinced that you need much more than 4GB of RAM for a phone. Maybe in a few years time when the software requires it. At the moment though, 4GB of RAM is perfectly fine for a phone.

This is because Android OS uses RAM rather dramatically. Unlike a computer that slows to a grinding halt when running out of RAM. Android OS simply closes background apps that are no longer being used. Therefore, do not be put off by the 4GB of RAM, as this will not cause you any issues for the majority of tasks.

When it comes to storage you’ve two options available. Either 64GB or 128GB. 64GB should be enough for most people. However, if you like to store a lot on your phone, then you may want to opt for 128GB.

This is something you’ll want to consider before buying the phone because it does not have a Micro SD slot. So you cannot add further storage later on if you need it. If you’re unsure whether 64GB will be enough, then choosing 128GB may be the better option if you can afford it.

The Pixel 3 comes with a 5.5-inch display. That’s a pretty impressive screen size for a phone as compact as this. Sure, you can get phones with a much larger display, but you then have to sacrifice on portability.

It’s OLED display provides great looking images and really vibrant rich colours that stand out. There is no denying that the OLED display on the Pixel 3 is simply beautiful. It comes with a resolution of 2160 by 1080, which is more than enough for a 5.5-inch display.

It has a bezel at the top and bottom of the display, which is something we are seeing less of lately. I love any display that has no bezels, but some phones released recently still have an ugly top bezel where the camera is located.

This can be really noticeable on some phones. Personally, I would prefer a bezel right the way across the top of the screen rather than just by where the camera is. The Pixel 3 does it the old skool way, which I think looks much better.

Also, although the Pixel 3 does have a larger bezel at the top and bottom of the phone compared to some of the latest flagship phones. It’s also worth remembering these bezels hold two front-facing cameras and two front-firing speakers. Something you don’t get on a phone without a bezel, so at least those bezels are giving you something in return.

The back camera is what really stands out on the Pixel 3 though. Obviously, since the launch of Pixel 4, the Pixel 3 no longer has the best camera. However, it’s still is an amazing camera that beats even some of the latest flagship phones released in 2019 and 2020.

This may be a phone released a couple of years ago, so you’d be forgiven for thinking the camera quality may let it down. However, that is simply not the case. Both the front and rear cameras provide fantastic photos you can treasure forever.

The Pixel 3 phone is still a great buy even three years after it was first released. Sure, the camera cannot compete against the Pixel 4, but it’s still a great camera compared to most phones.

The performance is fine for most tasks you could think of and the 5.5-inch display is beautiful. Yes, it has larger bezels at the top and bottom, but you get two front cameras and two front speakers because of that.

If you’re looking for a new phone right now and the Pixel 4 isn’t for you. Then the Pixel 3 makes a perfect choice. Great display, fantastic camera and excellent build and looks; what else could you want.

I hope you’ve found this Pixel 3 Mobile phone review useful and will help when choosing your next mobile phone. If you’re still uncertain why not have a read of the Pixel 4 review, so you can compare the two.