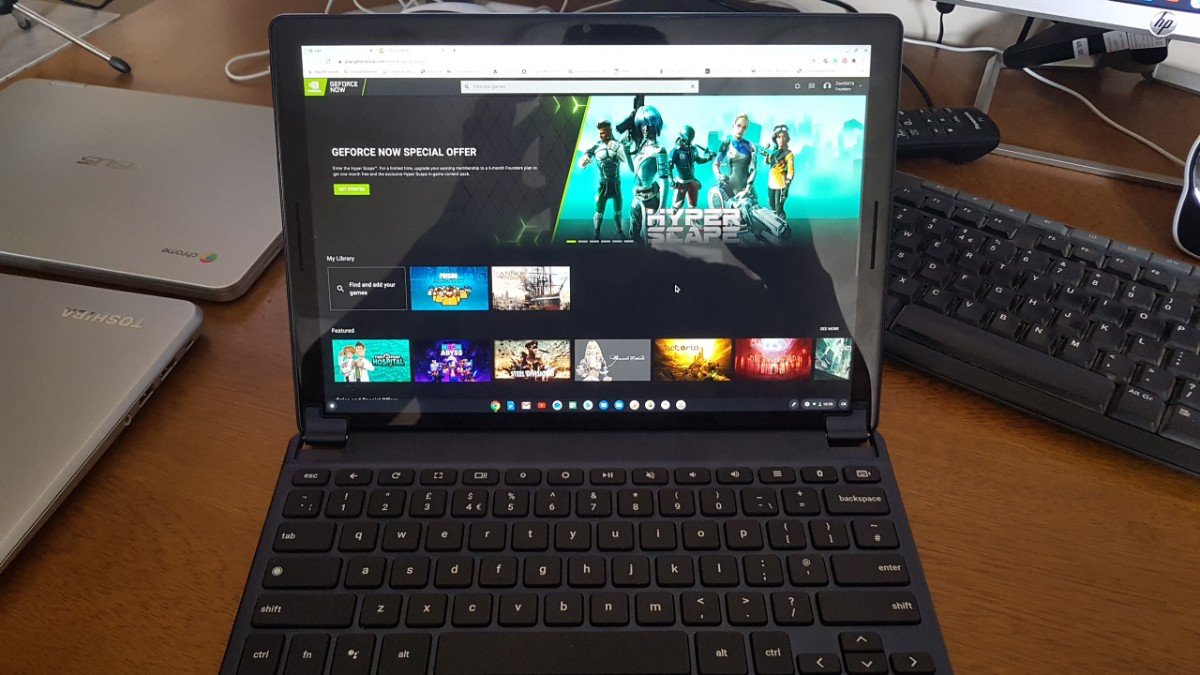 If you are looking for a computer to play PC games then I would seriously recommend a Chromebook or Chromebox. It may not be the first type of computer you think about for PC gaming, but there are some serious advantages to choosing ChromeOS for PC gaming.

In this article, I’ll explain all of the advantages and disadvantages of choosing ChromeOS for gaming rather than a typical Windows computer. Hopefully, by the time you’ve read this article, you will have a better understanding of gaming on ChromeOS using Nvidia GeForce Now, and why it may be a better option than going down the Microsoft Windows route.

Before gaming was possible on ChromeOS

I’ve owned a Chromebook since they were originally launched in 2011. However, it wasn’t possible to play PC games on a Chromebook until a couple of years ago. Although I started to use my Chromebook more and more over the years; when it come to gaming I needed another option.

For me, this meant buying a Microsoft Windows Desktop gaming computer. If you’ve ever bought a gaming PC you will already know how expensive they are. Unlike a typical Windows computer that may set you back around £600/$650. A gaming PC would cost a lot more than this, and you would most likely end up spending around £1,400/$1,450. That’s a lot of money.

The reason why PC gaming computers are so expensive is that they need something else other than the processor and RAM you find in all computers. A true gaming computer capable of playing advanced games requires a Graphics Processing Unit (GPU), which is more commonly known as a dedicated graphics card.

All computers have a Graphics card

This is when you would need a more advanced gaming PC with a dedicated graphics card. The two most popular cards are made by Nvidia and AMD. When you consider gaming computers not only come with the standard processor but also a GPU; it’s easy to understand why these computers cost a lot more money.

One of the huge disadvantages of a Windows gaming PC is the cost. You may be able to play games that have just been released when you first buy a new gaming PC. However, new games that are released after that continually improve.

Therefore, if you want to continue to play the very latest game releases on a PC. You would need to consider replacing your PC at least every three to four years. Considering the cost we’ve already mentioned of around £1,400/$1,450 that’s a lot of money to be spending every few years.

The game streaming service Nvidia GeForce Now was released a couple of years ago by one of the leading manufacturers of GPUs. One of the main reasons for this is that more and more people are moving away from Microsoft Windows for gaming, which is mainly due to the cost that I’ve mentioned.

This means it doesn’t matter too much how powerful your computer is. All of the game processing is done in the cloud, which means you can even play PC games using GeForce Now on a budget Chromebook.

One of the main advantages is you’re not having to spend a fortune on a gaming PC. Instead, you can buy a Chromebook or Chromebox, which costs three times less. Another huge advantage is you don’t need to worry about your computer playing the latest games.

The graphics cards you have access to are located on Nvidia GeForce Now servers. When games advance in the future, Nvidia will simply change the graphics cards used on these servers. This essentially means you don’t need to worry about updating your computer every few years to play the latest games.

The cost of Nvidia GeForce Now

You can get a free Nvidia membership, but I would only recommend this to see if GeForce Now works on your specific Chromebook. To get a better experience you’ll need to upgrade to a monthly subscription. Costs may vary depending on where you live, but as an example, in the UK today; it costs £8.99 a month for up to 1080p and 60 fps gameplay or £17.99 per month for 4K and 120fps.

That may sound like a lot of money but if you work it out it’s a good deal cheaper than buying a Microsoft Windows gaming PC over time. You can see from the calculations below how you can spend less gaming with ChromeOS and Nvidia GeForce Now rather than buying a gaming PC.

I’ve worked it out on the basis that a desktop gaming PC would be usable for four years. After that date, you would need to replace it with a newer model to play the latest games. I’ve also gone with a Chromebook in the mid-price range of £450/$500, which you would also replace every four years.

As you can see from the price comparison above. If you went with the priority GeForce Now subscription and chose to pay monthly; it would cost £518 less than buying a Microsoft gaming PC. You could save even more if you paid six months subscription in advance, which would work out at £590 cheaper over a four-year period.

One of the main disadvantages of using GeForce Now is that you need a good solid internet connection. To stream games over the internet, you need an internet connection of at least 35mbps. If you buy a gaming PC you don’t need to worry about this because all of the processing power is done locally.

You may also find gaming with GeForce Now doesn’t work too great if you are not in the same room as the WiFi router. Therefore, it’s best to stay close to your router or use an ethernet cable if you can.

If the internet in your area goes down then you will not be able to play any games. This could be frustrating if you had a long weekend of gaming planned, and your ISP had technical issues.

You can play games you already own

The good thing about Nvidia GeForce Now is that it will sync with well-known gaming providers. If you already own games on Steam or Ubisoft for example, these games will be available to play on Nvidia GeForce Now.

This means you can play a lot of your favourite PC games you already own. However, you may find some games are not accessible on GeForce Now. Older games tend to be unavailable whilst more modern games work with the platform. However, I’d recommend checking first if you have a certain game in mind to make sure it’s available on GeForce Now.

I’ve been using my Chromebox and Chromebook to play my favourite PC games on GeForce Now for about two years. I’ve been really happy with the experience so far and it means I no longer need to spend money on an expensive gaming PC every four years.

If you love your gaming but don’t want to spend a fortune on a Windows Gaming PC. Then I would consider choosing a ChromeOS computer instead and using the Nvidia GeForce Now service. I’ve found gameplay is far better, and as I’ve shown above; it costs a lot less over time.