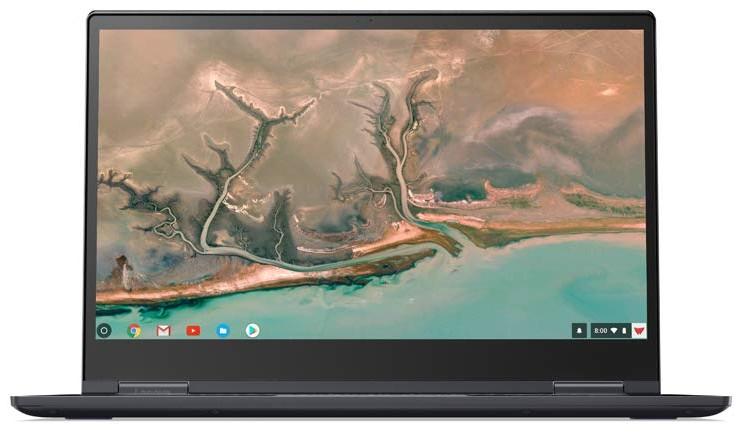 We have seen a huge selection of Chromebooks released in late 2018 and early 2019. These Chromebooks have come with much higher specifications than we have seen before. The main reason for this is because manufacturers are now confident that the Chromebook is more accessible to a wider range of consumer.

This is mainly down to Chromebooks being compatible with Android Apps, which does open the Chromebook to a wider market. We have never had such a wide selection, but all that choice can make it more difficult to choose your next Chromebook.

Today I’m looking at the Lenovo Yoga C630 Chromebook. A Chromebook pact full of features, but is it to be added to your wish list when choosing your next Chromebook?

Please note: There is a 4K version of this Chromebook. This review is for the High Definition model as the 4K version is only available in the USA at present.

The Lenovo Yoga is a pretty big Chromebook compared to most of the Chromebooks released lately. However, you do get a 15.6-inch display, which is huge compared to other models. So if you are looking for a big display you will not be disappointed.

The all-over aluminium body looks good and is much better than the plastic Chromebooks of the past. Lenovo has gone for a dark grey body, which may not be for everyone.

The Keyboard is well spaced out which is what you would expect from a Chromebook that has so much space on offer. However, it’s worth noting it does not come with a backlight, so the keys are not illuminated in the dark. This may not be an issue for most but we have got used to seeing this in most of the Chromebooks released recently. The keyboard is ok to type on but it does not stand up against the likes of the Asus C302, Asus C434 or the HP x 360 keyboards. The key travel is simply not there, so if typing is important to you I would look elsewhere.

The hinge rotates 360 degrees, which means you can use the Lenovo Yoga as a laptop or tablet. This is something of the norm now and I would seriously avoid Chromebooks that do not provide this functionality. At the very minimum, you need a Chromebook with a touchscreen display if you want to take advantage of Android Apps.

I’m not too keen on how it looks when closed. I really like Chromebooks that offer a solid look when closed. However, you get bits of the chassis sticking out on either end and I think this makes it look a little cheap. I know the looks are not important to everyone but I struggle to understand why manufacturers ignore this area sometimes. It’s also pretty heavy at 1.9kg, so is not going to make an ideal traveling partner.

This is where the Lenovo shines. The performance it provides is simply fantastic and this is thanks to the Intel i5 quad-core processor. The quad-core processor is capable of speeds from 1.6 GHz all the way up to 3.4 GHz. It also comes with 6MB of cache, which is great to see because it means the Lenovo Yoga simply performs.

If you are looking for a Chromebook to surf the internet or stream movies then you will have no problems with what is on offer here. However, it’s a much more capable Chromebook than that. The processor means you can easily multi-task with many applications and the Yoga C630 deals with anything you can throw at it.

This makes the Lenovo Yoga C630 future proof because it can handle any Android App available now and in the future. It’s really great to see Chromebooks now coming with Intel i5 processors.

The Lenovo Yoga C630 comes with 8GB of RAM, which is more than enough for a Chromebook today and for some years to come. Whether you are internet surfing or number crunching on a huge spreadsheet. The amount of memory on offer means the Lenovo Yoga will not slow down.

This is really important because there is no point in having an Intel i5 processor if you are then let down by too little memory. The Intel i5 and 8GB of RAM are clearly visible as the Yoga C630 is lightning fast.

It’s also good to see that it comes with 128GB of storage. This is more than enough to install plenty of Android Apps without the worry of running out of storage space. It also means you can happily store files locally without having to constantly move them to the cloud. However, you should always try to take advantage of the Chromebooks integration with Google Drive because it works seamlessly.

THE DISPLAY ON THE YOGA C630 CHROMEBOOK

A huge 15.6-inch display is on offer here. This is great for anyone who needs a larger display for work. It also comes with full high definition offering 1,920 by 1,080 resolution. You will also be happy to know the Lenovo Yoga C630 has an IPS panel.

The IPS panel means you can view the display from most angles without the image deteriorating. It also offers crisp images and rich colours. However, one thing to note is that the display is not as bright as you would expect from a nits rating of 300. There are other Chromebooks with a lower nit rating that appear brighter. It’s bright enough to use indoors but you may struggle a little if you intend to use the Chromebook outdoors on a sunny day.

The Lenovo Yoga comes with two USB Type-C ports and one older USB 3.0 ports. This is good to see because although Type-C is the way forward. Not everyone has upgraded their peripherals yet, so the older USB 3.0 port is ideal for connecting your older hardware.

It also comes with a Micro SD slot, so you can easily add extra storage down the line should you wish.

If you are looking for a Chromebook with great performance and a huge screen then the Lenovo Yoga C630 may be the one for you. The processor and RAM available means you will never come across problems when it comes to performance.

It’s not the prettiest looking Chromebook available, so if this is important to you then you may want to look elsewhere. It’s also not suitable for anyone looking for a truly portable Chromebook either. That 15.6-inch display is great but it does limit where you would use the device and it adds to the weight of 1.9kg.

The keyboard is ok to use but it could be better, so again, if you need to do a lot of typing on your new Chromebook. You may want to consider other models that have better key travel.

The display is fine and is what we would expect from a Chromebook in this price range. However, I still feel the Yoga C630 lacks the brightness you get from other Chromebooks.