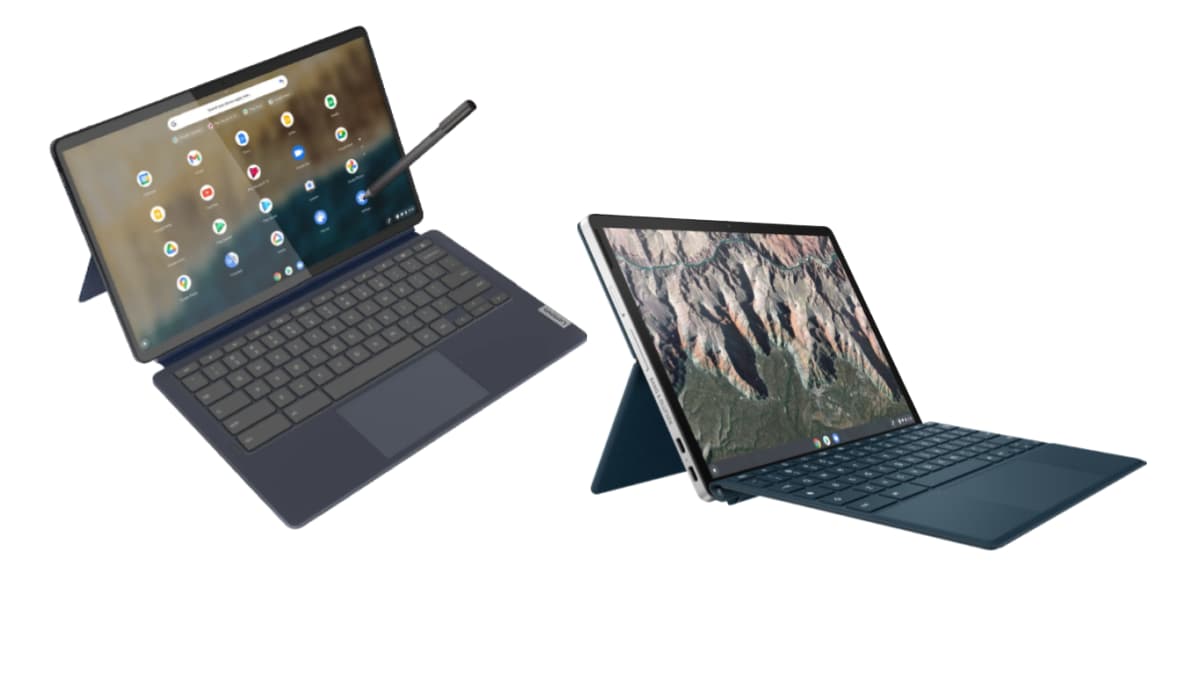 Although I love my Pixel Slate I wasn’t really sure they were going to take off when originally launched. There were two main issues. First of all Chrome OS did not exactly provide a great experience in tablet mode. Secondly, the Pixel Slate might be great but it was way too expensive. Sure, you can have an expensive Chromebook, but an expensive tablet, which was essentially an experiment. I think not.

Don’t get me wrong, if you’re after a high-spec 2-in-1. I would definitely consider buying a Pixel Slate even in 2021. The fact is, they are really hard to get your hands on now. No need to worry though, thanks to Lenovo, who had the vision to tackle the 2-in-1 Chrome OS tablet again in May 2020. You now have a selection of these types of Chrome OS devices to choose from.

It’s still early days, but I’m pretty confident we’ll see more 2-in-1 tablets in the future. This is great news for Chrome OS and for anyone who prefers them over a laptop or Hybrid. Let’s take a look at where we are now and what we might expect in the future.

Hats off to Lenovo

We really do have to take our hats off to Lenovo. They had only been in the Chrome OS world for a couple of years. Releasing some great budget and medium-spec Chromebooks. They could have played it safe and continued to do just that. Instead, they tackled the issue of Chrome OS tablets. Google made a huge mess when launching the Pixel Slate, so I can see why other manufacturers were not falling over themselves to give it another shot.

Lenovo had clearly learned from the mistakes Google made. The first was to wait for Chrome OS to have fixed all the issues when being used in tablet mode. The second was not to launch a super expensive tablet, which nobody was certain would even take off in the long run.

I know there were some who wanted more in terms of specs when the Chromebook Duet was launched. The fact is, Lenovo bringing out a budget-priced 2-in-1 was one of the main reasons why it was so successful.

The success of the original Lenovo Chromebook Duet is something I’m really happy about. For Chrome OS to continue to be successful it needed to offer more than just the Chromebook. Sure, we have the Chromebox, which I absolutely love and use mine on a daily basis. The 2-in-1 provides a different type of device, which will appeal to anyone who isn’t after a laptop or Chromebox.

This means the success of 2-in-1 Chrome OS tablets should see even more people switch to Chrome OS. This can only be seen as good news. It’s another reason why Chrome OS is without question here to stay.

It was only a matter of time before other manufacturers took interest in Chrome OS tablets. Nobody could deny the Chromebook Duet was more successful than perhaps a lot of people thought was possible. Sure, it certainly isn’t for everyone because it is a low-powered device. However, it was a great device to get the Chrome OS 2-in-1 tablet back into the news again.

Higher spec 2-in-1s are the next step

We can already see the 2-in-1 tablet was a success for Lenovo. It’s only just over a year since the launch of the original, and they are now bringing out a new model. The new Lenovo Chromebook Duet 5 boasts an OLED display and a more powerful processor. Yes, you could argue it’s still not offering super-powerful performance. It’s definitely a step in the right direction.

One manufacturer that I haven’t yet mentioned is HP. Who were in fact one of the first manufacturers to test the waters with a Chrome OS 2-in-1 tablet. The HP x 2. I wrote about whether the HP x 2 would change how we see Hybrid Chromebooks back in January 2019. Although it was a brave move by HP to bring us one of the first Chrome OS tablets. It was possibly not the success they hoped for.

I’m sure this will change with the new HP x 2 11 detachable. Offering a smaller display than the original and it looks very similar to a Microsoft Surface Pro. It’s a lot more expensive than the original Chromebook Duet, but it has already been on sale at Best Buy in the USA. Most probably done to take on the new Lenovo Chromebook duet.

The future of 2-in-1 Chrome OS tablets

We’ve already seen a number of manufacturers improve on the original Chromebook Duet. The latest models from HP and Lenovo are definitely offering better specs. If we continue to see success with Chrome OS tablets. I’m sure it will only be a matter of time before we see even higher-spec models being released.

I think it’s important we have a choice though. It’s great to bring out higher-spec models. However, we need to remember not everyone is after the greatest specs. Some of us are after value for money.