Great deal on the Asus C433 from Amazon UK

The Asus C433 is currently on offer at Amazon UK. If you’re after a new Chromebook at a bargain price, then definitely take a look at the current deal on offer.

Read the full review of the Asus C433 Chromebook

The Asus C433 is just one of the models that Asus released during 2019. I love this Chromebook because it looks super sexy. This is thanks to the slab-like look of the Chromebook, which looks very similar to what you would get from a Macbook Pro.

It sits between the Asus C425 and C434. It beats the C425 hands down. This is because the C425 does not support touch screen. No such problem here because the C433 is a Hybrid device, so comes with a touchscreen.

This makes it perfect for anyone wanting a Chromebook to take advantage of Android Apps.

The Asus C433 comes with the same processor you get from the Asus C434. The eight-generation M3 processor is capable of speeds of up to 3.40 GHz. It comes with a base speed of 1.10 GHz and the 4MB cache makes regular tasks perform quickly.

You’ll have no problem when it comes to performance for most tasks you’d want to do on a Chromebook. Whether that is internet surfing or using the latest Android apps. You can be confident this Chromebook will handle these tasks with ease. 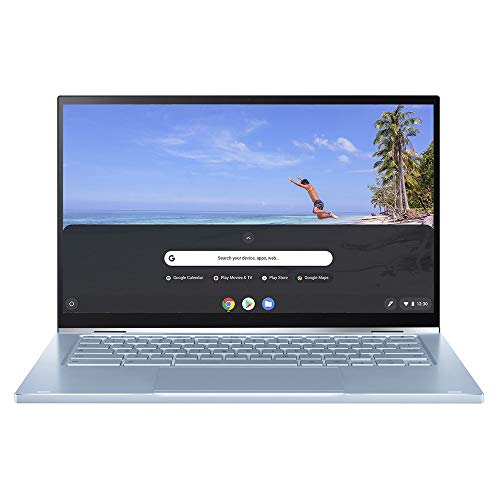 The display is also great and this is thanks to the Full HD 1,920 by 1,080 display. That’s not all though because it also comes with an IPS panel, which means you get great viewing angles and super crisp images and text.

It comes with 4GB of RAM and 64GB of storage. This is perfectly fine for most people. However, some people may be looking for a Chromebook with more RAM and storage.

If you’ll be internet surfing and using Android apps then you’ll have no problem with the amount of RAM and storage. If you’re intending on installing lots of Android apps, then you may run out of space.

The good thing is the Asus C433 comes with a Micro SD slot, so you can easily add extra storage at a later date.

If you’re after a super-sexy Chromebook that performs well then this deal is not to be missed. I’d be happy to use this Chromebook on a daily basis.

For me, a good looking Chromebook is just as important as performance. Also, the keyboard you get with the C433 is fantastic, which is really important if you need to do a lot of typing.

Great deal on the Samsung 11.6-inch Chromebook at Amazon USA

Why the Asus C302 makes a great budget Chromebook

Acer 315 Chromebook offers a lot for the price

Two-year guarantee when buying a Chromebook at John Lewis