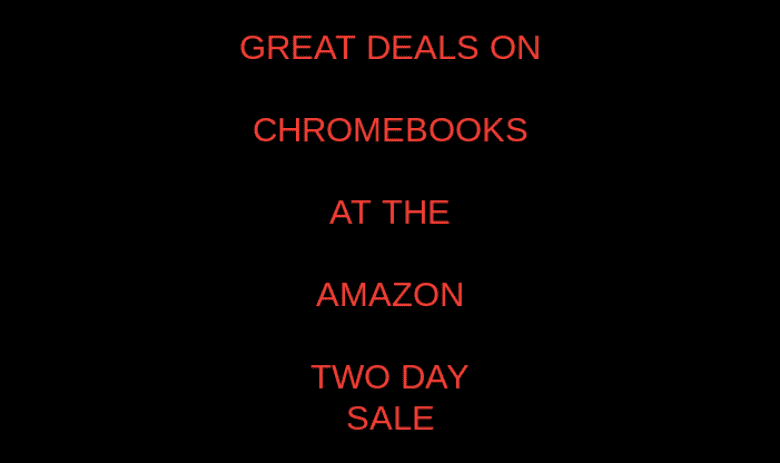 We all love a great bargain especially when it involves getting your hands on a Chromebook at a much cheaper price than it normally retails.

For the next two days, Amazon Prime members can get their hands on a new Chromebook at massively reduced prices. So if you’ve been thinking about buying a new Chromebook but something was stopping you from making that purchase. Then now is the time to consider what is on offer.

Find out what to look for when buying a new Chromebook:- ChromeOS buyer’s guide – a complete guide to buying a Chromebook

The first thing I noticed is that not all the deals are just for Amazon Prime members. At the moment you can get your hands on the amazing Asus C434 Chromebook at a reduced price. This Chromebook is one of the best-released devices over the last twelve months. The normal retail price is unlikely going to reduce anytime soon, so grab it while you can.

Another great Chromebook to be released over the last twelve months is the Dell Inspiron 14. This is a great Chromebook and comes with a free stylus. It’s well built and has a stunning display and works perfectly with the stylus in tablet mode.

You can currently get the Dell Inspiron 14 with a huge discount from the normal retail price.

It’s currently on offer at a reduced price.

It has a touchscreen display and supports Android Apps. Talking about the display. It is one of the only budget Chromebooks that come with a full HD display boasting 1,920 by 1,080 resolution.

There are currently nine Chromebooks in the Amazon Prime deal and many more Chromebooks with reduced prices for all Amazon customers. However, you should not delay because this is a two day only sale.

There are some great deals to be had on Chromebooks if you live in the USA. This is mainly for Amazon Prime members but you’ll find great deals even if you’re not a prime member.

Some of the best deals I found are on the Samsung Chromebook Plus with a huge price drop from the normal retail price. This is a great Chromebook and it’s just a shame that we cannot get our hands on it here in the UK.

The Acer Chromebook Spin 13 recently got the number two position in my Best Chromebooks in 2019 list. The only Chromebook that beat it was the Pixelbook.

This is a great Chromebook and is the only device around that can directly compete with what the Pixelbook offers. If you’ve had your eyes on this but was concerned about breaking your budget. Then today is the day to act. It’s currently on sale at a whopping reduced price compared to the normal retail cost.

THERE ARE PLENTY MORE AVAILABLE

There are plenty of Chromebooks reduced in price at Amazon USA for the next two days. If you want to grab a bargain you should do so now before they run out of stock.