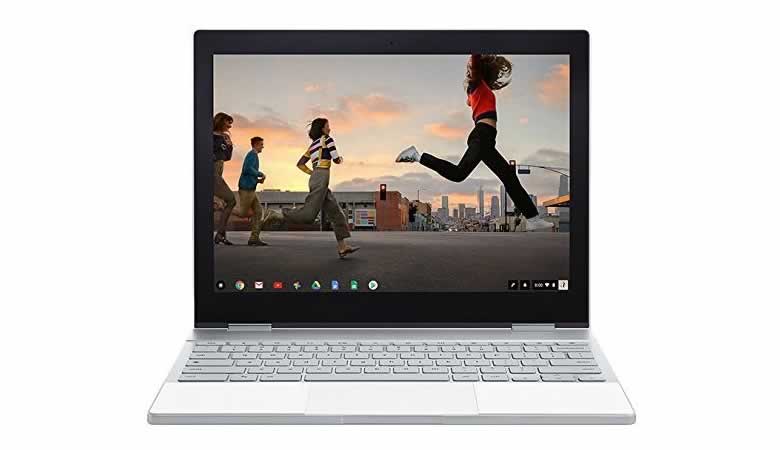 What makes the Pixelbook so special is how Google has managed to produce a laptop that can compete with any laptop on the market. It’s a Chromebook but it can compete if not surpass the likes of the Apple MacBook Pro.

The design of the Pixelbook is simply beautiful. The Pixelbook with its brushed aluminium chassis and super thin dimensions makes it one of the smartest looking laptops on the market right now. No longer does it mean settling for second best in the looks department if choosing a Chromebook over an Apple or Windows-based laptop.

The rubberised theme continues with the palm rest, which makes it comfortable to rest your palms when typing on your Google Pixelbook. Whilst we’re talking about typing, the keyboard on the Pixelbook is to die for. It’s without question, the best keyboard available on any laptop right now.

Typing on the Pixelbook is an absolute pleasure. The keys are well spaced and the keys travel down when typing, which has become a rarity in ultra-thin laptops. This cannot be underestimated if you need a laptop to type with. You will never want to use another laptop for typing once you’ve used the keyboard on offer from the Pixelbook.

Each key press provides a satisfying click, so you can ‘performance type’ without any of the problems you get with most keyboards on offer from the ultra-thin laptop market. Also, if you do type a lot you’ll be happy to know the Pixelbook comes with a backlit keyboard, so you can type day or night.

Talking about it being a perfect laptop for people on the move, it weighs in at just 1.1kg, which is ultra-light for a laptop offering such great performance.

When it comes to performance it’s no surprise the Google Pixelbook excels. The Pixelbook is without question the best performing Chromebook available. Whether you task it with number crunching on a spreadsheet or photo editing the Pixelbook will handle it with ease.

However, forget about performing against other Chromebooks, as the Pixelbook even outperforms the Apple MacBook Pro and Microsoft Surface. Who would have thought that would have been mentioned in a review about a Chromebook a few years ago. It’s an amazing achievement for Google and excellent news for Chromebook fans. This is not only thanks to the Intel Core i5 dual-core processor with a 4MB cache and a processor speed capable of 3.3Ghz. It’s thanks to the super light operating system ‘Chrome OS’, which the Chromebook uses. This together with excellent processing power means the Pixelbook easily outperforms the Apple MacBook Pro or Windows Surface.

The Pixelbook does not disappoint when it comes to battery life. This is something where Chromebooks excel, and the Pixelbook does not let us down here. It offers over 10 hours of usage from a single charge. However, this depends on what you’re doing, but even with extreme usage during the day, it should last you about 7 to 8 hours. This is much more than you would get from a Mac or Microsoft laptop.

The Display on Google Pixelbook

The 12.3-inch display offers something to rival a Microsoft Surface or Apple MacBook Pro and this is thanks to the 235 pixels per inch. The resolution on offer of 2,400 x 1,600 pixels means you get one super crisp image.

The display gives an amazing brightness, which makes watching movies or looking at photos a delightful task. The colour reproduction is amazing and is something that needs to be seen to be believed.

The Pixelbook is a convertible Chromebook, which means it also works as a tablet. It also has the option to use the Pixelbook pen, which provides amazing accuracy when drawing on the Pixelbook. The Pixelbook pen, however, is an optional extra, so you will have to fork out some extra money if you’re wanting to take advantage of this.

One of the great functions of the Pixelbook pen is the button on the side. Hold this button down while drawing around an image, and the Google Assistant searches the internet to find out what the object is. It then comes back with a description for the object. This is a great feature and is fun to use. It’s sensible to expect, until technology gets better, to not expect too much in the way of sound quality when working with a device as thin as the Pixelbook. If you want to listen to music, then it’s a better option to plug in a decent pair of headphones using the headphone jack available.

One of the biggest moves made by Google over the last couple of years was to make Chromebooks compatible with Android Apps. This greatly increased the flexibility of working with a Chromebook.

However, no Chromebook to date has provided Android Apps in a seamless way. The Pixelbook has changed all this and shows the world what the Chromebook is capable of. Working with Android Apps using your Google Pixelbook is an absolute pleasure.

It also looks as if the price of the Google Pixelbook is coming down in America according to this article from the Forbes website.