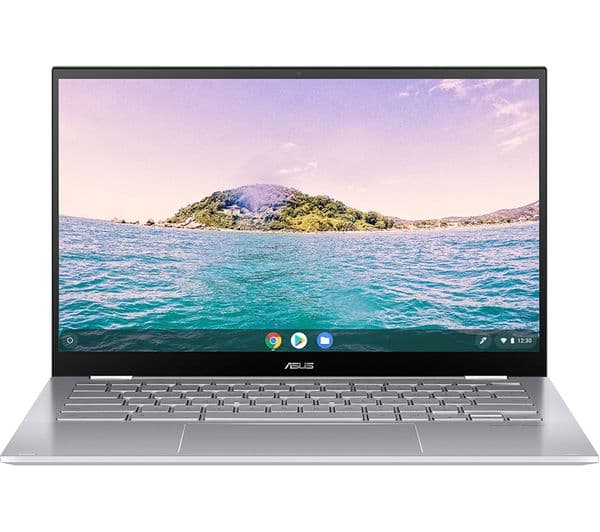 I’ve never really taken much interest in the Asus C436 Chromebook. This is mainly due to me believing it’s crazily over-priced at the recommended retail price of £999.99. Don’t get me wrong, it’s a great laptop but at that price, I would have expected to see something special. The good news is at the moment you can get your hands on this laptop at a greatly reduced price.

I’ve regularly seen the Asus C433 on offer, but I’ve not seen such a big discount for the C436. At the reduced price, I can see why this would be the perfect Chromebook for many people. This is definitely a high-end laptop when it comes to the processor and storage used. The display though, I’d say you’re getting what you’d expect from a mid-range laptop. That being said, I don’t really think you need much more than a Full HD display on a 14-inch laptop.

A base speed of 1.6 GHz and a turbo speed of 4.2 GHz all running on four cores means you’ll get amazing performance. Anything you can consider doing on a Chromebook is possible with this device. The 6MB cache will also mean more processes, which are performed regularly will do so much more quickly. Find out more about the type of processor you need for your Chromebook.

A processor is important for performance but it will be useless if you don’t have enough RAM. The Asus C436 on offer comes with 8 GB of RAM, which is more than enough for what you need on a Chromebook. If we see a Linux Steam app released in the future, then you’ll be happy to own a Chromebook with 8 GB. In fact, If it’s really successful we’ll most likely start seeing Chromebooks with more RAM than this.

At the moment though, 8 GB of RAM is plenty and will help to make this laptop perform at great speeds. If you’re unsure how much RAM is needed, have a read of how much RAM do you need for your Chromebook in 2021.

When it comes to storage you’re getting 256 GB. This is a huge amount of storage, but it’s good to see. This is because if you’re likely to use a lot of Android Apps, these are installed locally, so they use up your local storage. Also, Linux is almost out of Beta mode, so I’d expect more people will be using Linux on the Chromebook in the future. Although 256 GB is a huge amount of storage for a Chromebook. I think you could easily use this if Linux and Android apps are your thing. The great news is, as you would expect from a high-end laptop. It’s SSD storage rather than the cheaper eMMC storage. Great for when dealing with large files.

The display looks amazing and I’m not just talking about what you see on the screen. Just like you would expect from Asus. The super-thin bezels around the screen make this look like a quality laptop. Nothing looks cheap with the Asus C436, which is important if you like owning a laptop that looks the part.

It comes with a 14-inch Full HD display with a resolution of 1,920 by 1,080. As I’ve mentioned earlier, at the normal recommended retail price, you could be forgiven for expecting more. However, Full HD on a 14-inch display with a 16:9 aspect ratio is all you really need. It’s a touchscreen as well, which means you’ll have no issues using Android apps that work better with touch.

Should I buy this Chromebook?

If you’re looking for a high-end Chromebook that performs well then this is a good choice. I’d say it’s a tad expensive at the normal retail price. If you can get it on offer then it’s a great deal. It looks great, which is what we’ve come to expect from Asus Chromebooks.

The Hybrid functionality, which means you can use it as a laptop or tablet is also a great feature of this laptop. Hybrid devices come with a touchscreen as standard, which means you can take full advantage of what Chrome OS offers. If you want the best when it comes to buying a laptop. Then I’d definitely be considering whether this is the one for you.