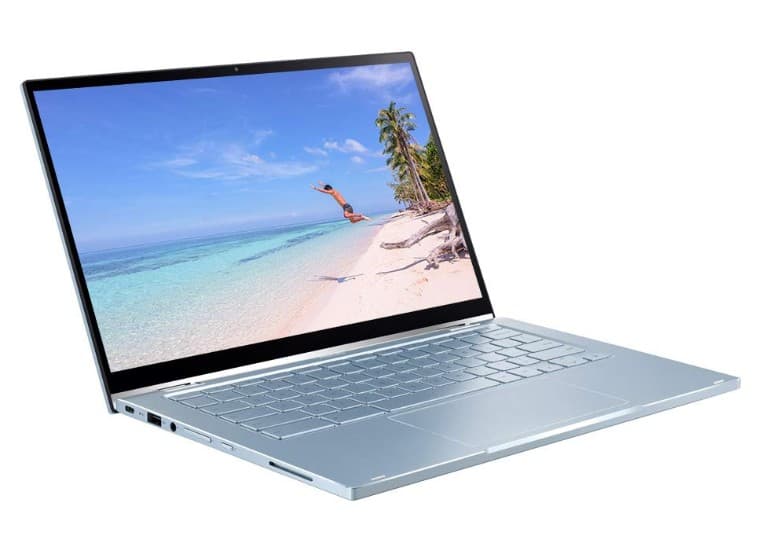 If you’re after a good all-round Chromebook, which is well built and offers decent specs then you may be interested in this deal. At the moment you can currently get your hands on the Asus C433 for just £399.99. That’s a massive £100 off the normal retail price. The Asus C433 is a well-built Chromebook that will never fail to get heads turning. Yes, this is definitely a laptop you will not be embarrassed to be seen using out in public.

It’s a Hybrid design, which means you can use it as both a laptop or a tablet. This is thanks to the hinge that allows the display to be rotated turning it from a laptop into a tablet in a matter of seconds. This is perfect if you want to have the best of both worlds but don’t want to spend money on separate devices. It comes with a beautiful Full HD display with a 1,920 by 1,080 resolution. Like you’d expect from Asus the bezels around the display are super-thin. This not only makes it look great it also means you’re getting a 14-inch display in a nice compact chassis.

This particular model comes with an Intel M3 eight-generation processor. The dual-core processor is capable of a base speed of 1.1 GHz but can reach turbo speeds of up to 3.4 GHz. Find out the type of processor you need for your Chromebook. The M3 processor is more than capable of handling just about anything you’d want to do on your Chromebook. Whether that is surfing the internet, social media, streaming HD movies or using the latest Android Apps. You’ll have no problems with the processor when using any of these types of software. You’ll be able to use all of the Google Office Suite software as well. This includes a word processor, spreadsheets program and slides. The Slides program is very similar to what you’d get from Microsoft PowerPoint.

It comes with 4GB of RAM, which you’ll find is just enough RAM for what you need from a Chromebook today. Even if you decide to use Linux Apps you should not have any issues with this amount of RAM. Find out how much RAM you need for a Chromebook. Don’t get me wrong if it was available with 8GB of RAM then this would have been great to see. However, the 4GB of RAM is still enough to perform most tasks without any issues.

The 64GB of storage means you’ll be able to install plenty of Android Apps without the fear of running out of storage. You’ll also have plenty left over to store other files locally. However, you should try and avoid storing files locally where possible. Your files will be much safer if you store them in the cloud using Google Drive. Google Drive comes free for anyone who already has a Google Account. You get 15GB of storage for free, which is more than enough to store plenty of files in the cloud.

IS IT WORTH BUYING?

At the current sale price of £399.99, this Chromebook deal is definitely worth considering. The Asus C433 is more than capable of using all of what Chrome OS has to offer. Not only that, this laptop looks stunning, and I personally feel it looks better than the Asus C434 and C436. Unlike the C434 and C436. The C433 has an all-over aluminium outer body, but the inside is made of plastic. The C434 and C436 is aluminium inside and out. That being said, it still looks great.

If you’re on a budget and can’t afford the extra for the C434. Then this Chromebook is something worth considering. The great thing about this Chromebook is the display. Full HD with an IPS panel at this price is a very good deal. At the current price, you can’t really argue when considering what you’ll be getting for your money. You can find out more at Argos where you can currently pick up this Chromebook for £399.99.