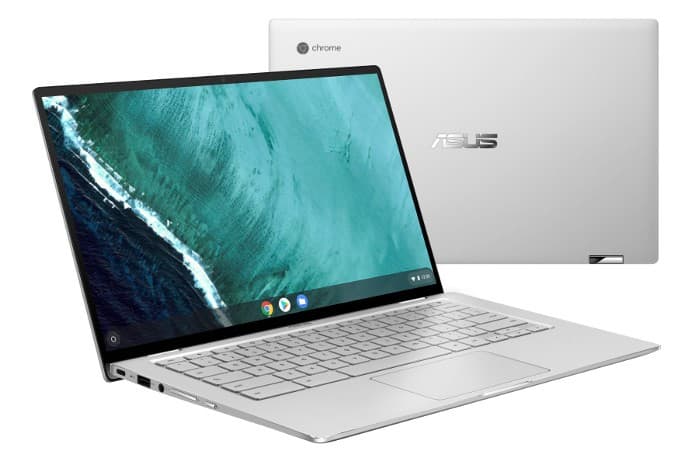 If you’re looking to buy a new Chromebook then you may be interested in this deal I’ve found in the UK. You can currently get your hands on the fantastic Asus C434 Chromebook with up to £200 off the retail price. That’s a huge saving on a Chromebook, which offers so much. The Asus C434 is the direct replacement of the most loved Asus C302. It had a lot to live up to because its predecessor was one of the most popular Chromebooks you could buy in the UK. The great news is Asus did a great job on the Asus C434 Chromebook and it did the Asus C302 proud.

There are two deals available for the Asus C434. One of them gets you £100 off the retail price and the other a massive £200. Both deals are excellent and the one you go for depends on what you’re looking for from your Chromebook. So let’s take a look at what the Asus C434 Chromebook offers and the two different deals available. The C434 comes in different configurations, which means you can choose the right computer for you. This is great because it means you don’t need to spend money on the more expensive model if you have no need for it.

This is the least expensive Asus C434 Chromebook available. I would not go as far as to say it’s a budget Chromebook because it isn’t. I currently own two Chromebooks with an Intel M3 processor and both perform perfectly fine. It comes with an eight-generation Intel M3, which boasts a base speed of 1.1 GHz. When needed, it has a turbo speed of 3.40 GHz. That’s a pretty impressive clock speed, and the 4MB cache helps this. The cache is where information is stored for when the processor needs to access data quickly. The higher the cache memory the faster regular processes will be carried out on your laptop.

It comes with 4GB of RAM, which is more than enough for most people. There has been a lot of chatter lately about needing 8GB of RAM. I’m not really buying into that and you can find out why in my post about how much RAM you need for your Chromebook in 2021. If you’ll be using your Chromebook to surf the internet, use social media, stream HD movies on YouTube and Netflix then 4GB of RAM will be absolutely fine. It’s also enough RAM to use most of the Android Apps available in the play store. In fact, it will run all of the apps in the play store without any issues.

If you’re buying a Chromebook for word processing or spreadsheet work. Then again, the 4GB of RAM is more than enough. Also, remember the Chromebook comes with a word processor and spreadsheet program you can use for free from Google. I use them all the time and they offer everything you need.

The storage is impressive at 128 GB. It’s true, in the last couple of years the storage needed on a Chromebook has increased. This is because you can now install Android Apps and Linux Apps on a Chromebook. These apps use local storage, so the more apps you want to install the more local storage you’ll need. That being said, 128 GB of storage is more than enough to install plenty of Android Apps and Linux apps without running into any issues.

ASUS C434 WITH INTEL i5 PROCESSOR

If you need more power from your Chromebook then you may be interested in the Asus C434 Chromebook with an Intel i5 processor. The eight-generation Intel i5 processor is capable of a base speed of 1.3 GHz and a turbo speed of 3.9 GHz. Again, that’s a very impressive turbo boost clock speed, which will make your Chromebook perform well, even at the most demanding of times. I own an Asus Chromebox 3 with exactly the same processor and it performs amazingly.

When it comes to the RAM you’re getting double the amount compared to the M3 version. This is really important because an Intel i5 processor will perform much better if it has plenty of RAM to play with. 8GB of RAM is more than enough for what you’ll need now and what will be needed in a few years from now. You’ll be able to do all of the things mentioned with the M3 version. The difference being, everything will be quicker thanks to the processor and RAM upgrade. Also, if you’re interested in using Linux Apps the 8GB of RAM will make running Linux Apps a lot quicker. However, you can still use Linux Apps with a 4GB Chromebook.

The storage is the same at 128 GB. This is absolutely fine because as I’ve already mentioned this is more than enough storage for a Chromebook. Even if we fast forward a few years 128 GB of storage isn’t going to cause you any concerns. Also, you should only really be using this storage to store Linux and Android Apps. All of your other work is best saved in the cloud. Both models allow you to add extra storage at a later date because they come with a Micro SD slot. Find out more about how to add storage easily to your Chromebook with a Micro SD card.

WHICH ONE IS RIGHT FOR YOU?

Both of these Chromebooks are great. Like I’ve already mentioned, I own the Asus C302 and Pixel Slate and both of these use the M3 processor. I’ve never had any issues with performance, so don’t consider an M3 processor as a budget processor because it isn’t. Sure, it’s not going to be as fast as the Asus C434 offering the Intel i5 processor, but that is also due to that particular model offering double the amount of RAM.

If you’re after a Chromebook for internet surfing, social media, Netflix, Android Apps, word processing and spreadsheets. Then you’ll not come across any issues by choosing the Asus C434 with the M3 processor. However, if you’re looking for a Chromebook that performs at amazing speeds. Then the Asus C434 with the Intel i5 processor is possibly the better choice. Also, the extra 4GB of RAM you get with this model will make a huge difference in performance.

If I was choosing between these two models and I did not have to worry about a budget. Then I’d definitely choose the Intel i5 model. This is because you’re getting £200 off compared to £100 for the M3 model. So, it appears the perfect chance to grab a laptop with excellent specs. The i5 will ensure you’re buying a Chromebook that will be able to use Linux Apps as well. It all depends on your budget. Both are great. If you want to find out more before buying take a look at the Asus C434 Review.