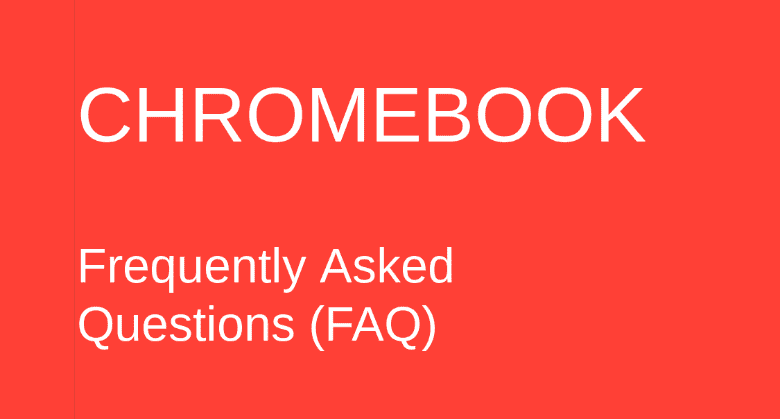 This Chromebook frequently asked questions guide provides everything you need to know about the Chromebook. Whether you’re considering buying Chromebook for the first time or you already own one. You’ll find answers to every question you can think of relating to the Chromebook.

WHAT IS A CHROMEBOOK?

A Chromebook is a laptop computer that was launched in 2011. Since then it has grown in popularity around the world and is suitable for all types of computer users.

The Chromebook is manufactured by many different manufacturers, so it’s easy to find a Chromebook that is suitable to your needs. What makes it different from other types of computers is its operating system Chrome OS.

WHAT IS CHROME OS?

The downside to Linux is that it’s also the most difficult operating system to understand. This is why Chrome OS has grown in popularity. It offers the security and power of Linux but is extremely easy to use. This means you get access to the most powerful operating system without the difficulties of learning a Linux based operating system.

The Chrome OS operating system was created by Google. Google has a huge team of developers who are continually working on developing Chrome OS. This means you get regular updates to Chrome OS, which keeps you safe and secure while working online.

Both Microsoft Windows and Apple iOS was created many years ago before the internet was as advanced as it is today. Although they are updated regularly, they are computers that have been designed to work without an internet connection.

This is different from Chrome OS, which has been created with the internet in mind. You can use Chrome OS without an internet connection but it works best when connected. Chrome OS is a cloud-based computer, which makes it a perfect choice because you do not need to worry about buying expensive individual software packages. Everything you need is available on the internet.

DO I NEED A GOOGLE ACCOUNT TO USE A CHROMEBOOK?

The Google Account is free and comes with Gmail, which is Google’s email service and is widely considered the best email service available in the world.

A Google Account also comes with many other features, which you’ll likely become familiar with the more you use your Chromebook computer.

IS THE CHROMEBOOK SAFE?

As the Chromebook uses Chrome OS it’s considered one of the safest computers that you can use. There are many reasons for this. The Chromebook receives regular Chrome OS updates, so any security floors are identified and removed much quicker than you would get with Microsoft or Apple iOS.

Also, Chrome OS is different from other operating systems when it comes to security. You do not install programs onto a Chromebook, so you do not need to worry about computer viruses. The safety record of Chrome OS is one of the main reasons why the Chromebook has grown in popularity over the years.

The internet is great and has changed how we interact with the world. However, the internet also has a dark side where viruses are waiting to steal your data and identity. Google has created Chrome OS with security in mind, so you are kept safe while surfing the internet.

DO YOU NEED ANTI-VIRUS PROTECTION SOFTWARE?

You do not need anti-virus software to keep safe when using a Chromebook. This is because Chrome OS has been specifically designed around security. This means you can get on with using your computer without having to worry about computer viruses.

It also means owning a Chromebook is a lot cheaper than owning a Microsoft or Apple MAC computer. Anti-Virus software can cost a lot of money when you consider the best anti-virus software comes with a yearly subscription cost.

Find out more about why Chrome OS makes the Chromebook one of the safest computers you can use. Have a read of this article if you want to know more about Chrome OS and Chromebook security features.

CAN A CHROMEBOOK REPLACE A MICROSOFT WINDOWS COMPUTER?

This is because Chrome OS offers a totally different experience when using a Chromebook. It’s much safer and is an easier computer to use, which means you can spend more time doing what you want to do.

Most people use the majority of their time on the internet. The Chromebook was specifically created for the internet, so it’s the perfect choice for internet surfers. It’s also capable of much more than that and there is little you cannot do on a Chromebook that you can do on a computer running Microsoft Windows.

Find out more by reading can a Chromebook replace a Microsoft Windows computer.

CAN YOU INSTALL PROGRAMS ON A CHROMEBOOK?

This is one of the main differences with a Chromebook. You do not install programs like you would on a traditional type of computer. This has many benefits and one of these is not having to purchase software to install. Instead, you can access programs on the internet and many of these are free to use.

For example, Google has created its own Office Suite, which has been specifically made for cloud computing. Google Docs includes a word processor and a powerful spreadsheet program. These programs are accessed by simply visiting an internet web address in your Chrome browser.

However, you can install Android Apps onto a Chromebook.

WHAT ARE ANDROID APPS?

Android Apps are accessible from the Google Play store and were originally designed for Android mobile phones. Over the last few years, Google has made Android Apps available for the Chromebook. This has changed how Chromebooks work for the better.

There are hundreds of thousands of Android Apps and most of these are free to use. You’ll find Android Apps to use for many different tasks, which makes the Chromebook much more versatile than it once was.

CAN I USE MICROSOFT OFFICE ON A CHROMEBOOK?

ARE THERE DIFFERENT TYPES OF CHROMEBOOK?

HOW FAST IS THE CHROMEBOOK?

One of the reasons why the Chromebook is successful is because it’s extremely fast compared to computers running Microsoft Windows. Chrome OS has been coded with speed and security in mind. This means you can turn a Chromebook on and be asked for your login credentials in less than a couple of seconds. Once you’ve entered your login details you can open a browser and surf the internet within five seconds.

The Chromebook does not slow down over time, which is totally different from what you would get with Microsoft Windows. Whether your Chromebook is two months or two years old, you will get the same speed as when you originally bought your Chromebook computer.

Find out more about what makes the Chromebook so fast. This article explains further why the Chromebook is considered one of the fastest personal computers you can buy.

HOW GOOD IS THE CHROMEBOOK BATTERY LIFE?

One of the major issues with laptop computers is battery life. Chromebooks are well known for having great battery life. Depending on the type of Chromebook you purchase. You can expect a battery life from between 12 and 7 hours on a single charge.

This is much better than the typical battery life of a laptop running Microsoft Windows, which is about 4 hours. The main reason for this is because Chrome OS is a streamlined operating system, so it takes up a lot fewer resources to run than Microsoft Windows.

Another reason is that the hardware inside a Chromebook, in general, takes up a lot less power to run. Also, Chromebooks do not come with a hard disk with moving parts. All the Chromebooks currently available come with hard disks with no moving parts. This dramatically reduces the power needed to access data.

CAN YOU PLAY GAMES ON A CHROMEBOOK?

You can play games on a Chromebook. There are plenty of Android App games available from the Google Play Store. Many of these games are free, which is another reason why the Chromebook costs a lot less through its lifetime.

However, you cannot play computer games like you can on a Windows-based PC. This is because these computer games need to run a program to install onto your computer. The Chromebook does not allow executable files, as everything you use is web-based.

This may change in the future because some Chromebooks also support Linux Apps. Linux Apps have the potential to be a lot more powerful than Android Apps. At present though, this is a project that is still in progress and you should not expect Linux Apps to be ready for the consumer any time soon.

You can find out more about whether Chromebooks can run computer games by reading can a Chromebook run steam games.