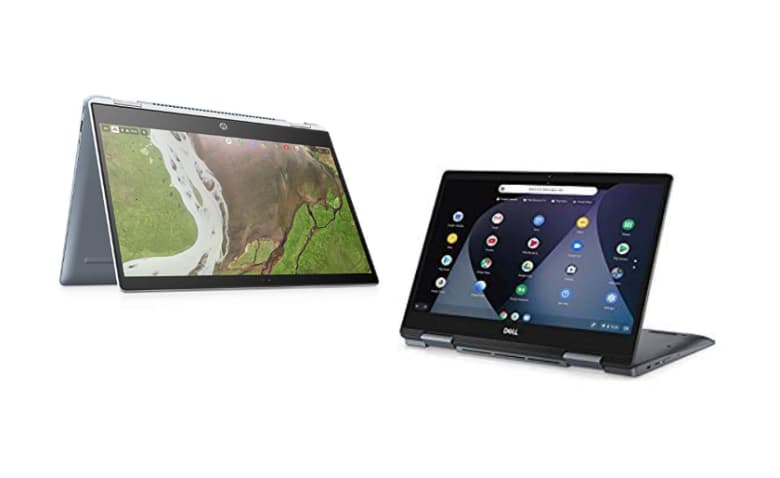 So you’re looking to buy a new Chromebook but stuck between the HP x 360 and Dell Inspiron 14. Well, you’ve done your homework because both of these Chromebooks offer great features. However, when you dive a little deeper one of them offers more, so let’s find out in this direct Chromebook comparison which is best.

If you’re still unsure what Chromebook you’d like to buy then take a look at these Top Ten Chromebooks to buy in 2019. These Chromebooks are high-spec and offer the very best Chromebook devices offer.

If you’re looking for a Hybrid device on a budget, then take a look at these Best Budget Hybrid Chromebooks you can buy in 2019.

Both the HP x 360 and Dell Inspiron 14 offer a great build quality and a lot of it may come down to personal preference. That being said, let’s take a look at the build quality of both devices, so we can see if either device beats the other when it comes to this alone.

The HP x 360 comes with a 14-inch display but thanks to the design the chassis is just over 13-inches. This is great if you’re looking for a Chromebook to use on the move.

As with most HP laptops it has a cool underestimated design with the famous HP logo on the lid. It’s a Hybrid and the hinges to transform from laptop to tablet are well designed and sturdy.

All of the body apart from the underneath comes in aluminium. This not only makes it look cool it also makes it a sturdy device. It’s a shame the underneath is plastic, as other devices in this price range come with an all-over aluminium design.

Similar to the HP x 360 the Dell Inspiron 14 comes with a 14-inch display. Dell has also managed to fit this into a nice compact chassis, which makes it ideal for using out and about. Again, it’s a Hybrid and the hinges work well.

The Dell Inspiron 14 comes with a built-in Stylus. This is really good to see from a Chromebook in this price range. If you’re looking for a Chromebook and you’re into art, then this is definitely a big plus point.

If you’re turned off by the HP x 360 not having an all-over aluminum design. Then you’ll be happy to know the Inspiron 14 has no such problem, as the whole chassis is aluminium.

This is a really difficult one because both devices are well built. The Dell obviously comes with an all-over aluminum body, which cannot be said for the HP x 360.

The inclusion of a Stylus is also great to see from Dell. However, I just get more satisfaction from the overall look and feel of the HP x 360.

Taking all this into consideration. The HP x 360 wins the Dell Inspiron 14 when it comes to build quality. However, there was not much between them, so I would not necessarily let this be a deciding factor.

You’ll be happy to know when it comes to the processor alone there is not much to consider. This is because the Dell Inspiron 14 and the HP x 360 Chromebooks both come with the same processor. This is the Intel i3 8th generation 8130U dual-core. It comes with a 4MB cache and is capable of speeds up to 3.40 GHz and comes with an impressive base speed of 2.20 GHz. Find out more about the processor to look for when buying a Chromebook.

However, performance is not just measured by the processor alone as other factors come into play here. The most obvious one is the amount of RAM each device has. The HP x 360 has double the amount of RAM compared to the Dell Inspiron 14.

The Dell comes with 4GB and the HP 8GB, which means the HP Chromebook outperforms when it comes to performance. I’m not sure what Dell was thinking when they decided how much RAM to install. A device in this price range with 4GB of RAM is a bit of a letdown in 2019.

Both computers may come with the same processor but that extra RAM from the HP x 360 is not to be overlooked. This makes the HP x 360 perform much better at multi-tasking and comes into its own when using memory hungry Android Apps. Unsure how RAM impacts performance? Then find out more about the importance of RAM when choosing a Chromebook.

Again, it’s very difficult to separate both of these devices when it comes to the display. Both offer a 14-inch screen with an IPS panel. The resolution on both devices also offers True HD at 1,920 x 1,080.

The only other thing to compare is the brightness, but both devices offer roughly the same here as well. The only obvious difference is that the Dell Inspiron 14 offers a stylus that comes included.

I’m really happy to say that you will not be disappointed with either of these devices when considering the display alone. It’s really great to see that the latest Chromebooks offer a good display. Find out more about Chromebook displays.

The Dell Inspiron 14 wins, however, and this is due to the stylus that is included in the price.

Both devices come with the older type USB port, which will come in handy if you’re still using older peripherals that need this connection. For someone looking for more advanced connections you’ll be happy to know that two USB Type-C connections are available from both devices.

If you’re also looking for a Chromebook where you can expand storage in the future. You’ll be happy to know that both devices come with a Micro SD slot. Find out more about how to add extra storage to your Chromebook.

Both of these Chromebooks are great and if you decide to choose either I’m sure you’ll be happy with your purchase. That being said, this is a direct comparison between the HP x 360 and Dell Inspiron 14, so one needs to be crowned the winner.

The HP x 360 wins the Dell Inspiron 14 in a direct comparison. This is mainly due to the fact that the HP x 360 has better performance than the Inspiron 14. This is thanks to the extra amount of RAM you get.

However, something the Dell does has, which you do not get with the HP x 360 is the stylus. If you’re looking for a Chromebook that comes with a stylus at a decent price, then you will not go far wrong with the Dell Inspiron 14.