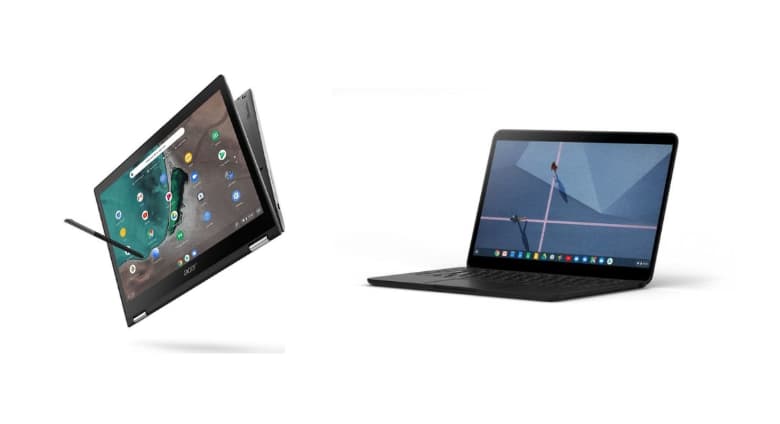 The launch of the Pixelbook Go, which is the latest Google Chromebook. Has given everyone the opportunity to own a Chromebook made by Google at a fraction of the price of previous models. This means more people are considering a PixelBook Go over other Chromebook models.

This makes sense because the Pixelbook Go is a great Chromebook that offers almost everything you could need. However, there are a few Chromebooks out there that the Pixelbook Go may struggle to compete with. One of those is the Acer Spin 13.

It’s no surprise to know that the Pixelbook Go is a very well built Chromebook. After all, Google is renowned for making excellent products. It’s one of the slimmest and lightest Chromebooks currently available, which means it is a fantastic choice for anyone who needs a Chromebook to use on the move.

It weighs in at just over 1kg making it one of the lightest Chromebooks you can buy. This is thanks to the magnesium that Google has used instead of the more traditional aluminium. It also looks uber cool when open or closed. Its minimalistic looks are available in both black and nearly pink and both colours look great.

There is no question that the Pixelbook Go is one sexy looking Chromebook. It’s also very sturdy, which makes it perfect for using on the move. It may be lightweight, but it certainly isn’t fragile in build. It’s worth noting the Pixelbook Go is not a Hybrid, so it cannot be used as a tablet.

Unlike the Pixelbook Go, the Acer Spin 13 is a Hybrid device. This means it can be used as a laptop or tablet, which is what we’ve come to expect from Chromebooks released over the last couple of years. I personally do not feel a Hybrid is generally that important. As long as the device offers touchscreen; you’ll be able to use Android apps perfectly fine.

The performance of a Chromebook is obviously an important factor when you’re looking at buying a new device. Both the Pixelbook Go and Acer Spin 13 offers good performance. So let’s take a closer look at each model to see what they offer in terms of processing power.

Unsure about processors and what it all means? Find out more about choosing the right processor when buying a Chromebook.

When it comes to performance it all depends on the model you choose when looking at the Pixelbook Go. The level-entry model comes with an eighth-generation Intel M3 processor. This is a dual-core processor with 4MB cache and a base speed of 1.10 GHz and a turbo speed of up to 3.40 GHz.

When it comes to comparing the Pixelbook Go against the Acer Spin 13 it makes sense to compare one specific model. So I’ll be comparing the models that come with an Intel i5 processor. If you want to find out more about the different Pixelbook Go models and the processors used have a read of this article.

The mid-range model comes with an Intel i5 processor with a 1.30 GHz base speed, which is capable of speeds up to 3.90 GHz. It also comes with 4MB cache to help speed up tasks that are performed regularly by the processor. This is the model I’ll be comparing against the Acer Spin 13.

This is a fast processor for a Chromebook and you’ll have no problems with any of the tasks that you throw at it. However, it’s worth noting the mid-range Pixelbook Go, at present, costs an extra £200/$200 compared to the entry-level model.

The Acer Spin 13 Chromebook comes with an eight-generation processor similar to the Pixelbook Go. However, the processer is much faster, as you’re getting your hands on a quad-core compared to a dual-core.

What this means is that you’re getting a much faster base speed at 1.60 GHz, but the maximum speed at 3.40 GHz is lower than the max speed of the Pixelbook Go at 3.90 GHz. The processor on the Acer Spin 13 is still much better at performance compared to the Pixelbook Go.

Its quad-core means it can handle memory functionality much better than the dual-core of the Pixelbook Go. This means there is much less of a chance of bottlenecking, which can slow a computer down when dealing with challenging applications.

The amount of RAM and storage your Chromebook has is something you should be considering when looking at buying a new Chromebook. The memory (RAM) is key to helping your device perform well. Find out more about how much RAM you need for a Chromebook and why it’s important.

The storage is also more important today for the Chromebook than it was a few years ago. This is because Android Apps that were not originally available on Chrome OS are installed locally. If you’ll be looking at installing a lot of Android Apps you’ll want to ensure the Chromebook you choose comes with enough storage.

The mid-range Pixelbook Go, which is the model we’re comparing against the mid-range Acer Spin 13 comes with 8GB of RAM. This amount of RAM is enough for any task you can perform on a Chromebook. It also means you’ll be buying a future proof Chromebook because 8GB of RAM will be more than enough for the next few years.

The 8GB of RAM available will ensure the Pixelbook Go performs well and will help the processor in providing you with excellent performance.

One issue with the Pixelbook Go is that it does not come with a Micro SD slot. This means you cannot add extra storage at a later date using a Micro SD card. You’ll want to consider this if you’re considering the Pixelbook Go. The 128GB on the mid-range model is fine, but the entry-level model only provides 64GB of storage.

The Acer Spin 13 comes with the same amount of storage and RAM as the mid-range Pixelbook Go, which is 8GB of RAM and 128GB of storage.

The main difference is that the Acer Spin 13 also comes with a Micro SD slot, so you can easily add extra storage at a later date using a Micro SD card. If you run out of storage on the Pixelbook Go you would have to look at adding extra storage by using USB, which I’m not convinced is as good as using Micro SD for storage.

You can have a stunning looking Chromebook with excellent performance. However, this means nothing if the display is poor. Sure, entry-level Chromebooks can get away with not offering an amazing display. When you’re spending the amount of money these two devices are selling for you’ll definitely be expecting beautiful visuals.

So let’s take a look at the displays on offer from the Pixelbook Go and the Acer Spin 13.

The Pixelbook Go comes with a 13.3-inch display. It offers true HD with a resolution of 1,920 by 1,080 and you’ll definitely not be disappointed. The Pixelbook Go offers a 16:9 aspect ratio, which is the same as most Chromebooks that are available today.

The images displayed are incredibly sharp and the colours are as vibrant as you’d expect from a Chromebook made by Google. The touchscreen works perfectly, which will make using Android apps a pleasure on this device.

It comes with a 13.5-inch display but you’re fitting a lot more information onto the screen thanks to the 3:2 aspect ratio. However, this may be good when using certain applications, but it may not be great when viewing films that are usually presented in 16:9.

Let’s make no mistake though, the display on the Acer Spin 13 is stunning. There is no other word to describe it. It comes with a much higher resolution of 2,265 by 1,504, which makes images amazingly crisp. The colours are rich and vibrant and viewing angles are great, which is thanks to the IPS panel that is used.

It also comes with a Stylus, which is great for anyone who wants a Chromebook for artistic reasons. This is where the 3:2 aspect ratio makes sense because drawing on a 3:2 feels more natural than on a display offering 16:9. Also, the Hybrid functionality is perfect for this Chromebook when using the stylus that is included.

The Acer Spin 13 was released a couple of years earlier than the Pixelbook Go. This is not a bad thing when it comes to connectivity because you get the best of both worlds.

The Acer Spin 13 offers the older USB ports and a newer Type-C port, which means you’ll have no problems using older peripherals you may own that do not support Type-C.

The Pixelbook Go offers two Type-C ports, which is great when you’re looking to the future. However, it does mean any older peripherals that do not support Type-C will have to be replaced.

The biggest concern I have when it comes to connectivity is that the Pixelbook Go does not come with a Micro SD slot. It’s not a major issue if you opt for the mid-range model, but the entry-level model with 64GB of storage may be an issue at a later date.

It’s really hard to compare these two Chromebooks because they essentially offer something very different. The Acer Spin 13 is a lot like the older Pixelbook. Well, they have a lot in common. Both use an Aspect Ratio of 3:2 and both come with a Stylus.

Google has moved away from that with the latest Pixelbook Go. The Pixelbook Go is aimed at people who want to use a Chromebook on the move. There is no denying that the Pixelbook Go is definitely the choice for anyone wanting a device where portability is important.

If you’re looking for a Chromebook that looks stunningly beautiful, which is super lightweight and is made by Google. Then the obvious choice is the Pixelbook Go. It also has the best keyboard available on any laptop available in the world right now.

However, if you’re looking for a Chromebook that offers more then the Acer Spin 13 might be the better choice for you. The Acer Spin 13 is a Hybrid, which is perfect for when you want to use the stylus. It also outperforms the Pixelbook Go when it comes to performance.

Still unsure which Chromebook is right for you? Then why not read the full review of the Pixelbook Go and the Acer Spin 13.