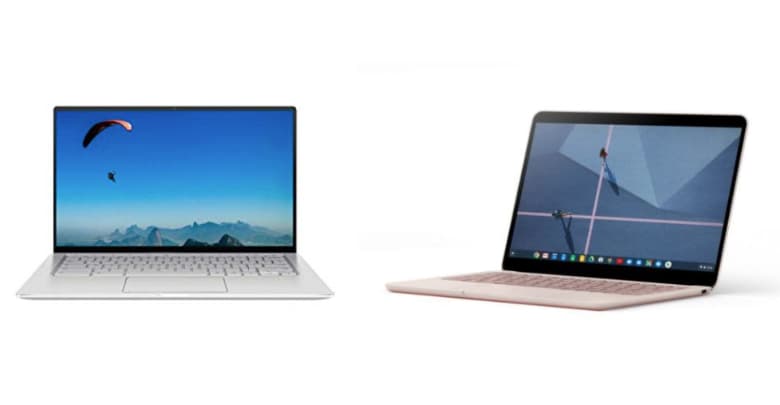 Over the last year, we’ve seen Asus launch three new Chromebooks to market. It’s been great for us because it gives us more choices when looking to buy a new Chromebook. Well, the choice has just got a little harder. If you’re looking for a high spec Chromebook at a relatively decent price. The question of whether you should buy the Asus C434 or Google Pixelbook Go is an important decision to make.

Google has launched the Pixelbook Go, the cheapest Pixelbook ever released, but is it better than the competition? It was highly expected the new Pixelbook would be another Chromebook by Google pushing technology forward. However, Google has gone back to basics by launching a Chromebook aimed at the middle market.

So let’s take a look at the Google Pixelbook Go and its rival the Asus C434 Chromebook in this direct comparison.

This is one of the first choices you’ll need to make when choosing between the Asus C434 and Pixelbook Go. Yes, it’s true that the Asus C434 looks great but its no competition against the Pixelbook Go. You may not be too interested in having a device that offers cutting-edge design, if so, you may find it much easier choosing between the two Chromebooks. However, if owning a laptop that is super-cool is important to you, then you may struggle between both devices.

The Asus C434 offers an all aluminium chassis, which looks really cool. That all over aluminium design also means you’re getting one sturdy Chromebook. That being said, The Google Pixelbook Go offers a super cool all over magnesium chassis with a choice of two colours.

You may think it does not matter too much whether the body is aluminium or magnesium. However, it matters a lot. The magnesium body is not only nicer to touch and handle, it also helps with the overall weight of the Pixelbook Go. That magnesium body helps the Chromebook weigh in at just 2 pounds. That’s compared to 3.19 pounds that you get with the Asus C434.

The difference in weight is significant enough to make a real difference if you’re looking for a Chromebook to take out and about with you. Also, the Pixelbook Go offers slightly smaller dimensions than the Asus C434, which is another reason why the Pixelbook Go beats the Asus hands down when it comes to portability.

The Asus C434 is by no means a huge device that you’ll struggle to take with you. It’s just 1.57cm thick with a width of 32.1cm and a depth of 20.2cm. However, compare that to the Pixelbook Go at just 1.34cm thick, a width of 31.1cm and depth of 20.63cm. Those dimensions may not appear drastically different but every millimetre counts when it comes to buying a laptop that you want to use when traveling.

Well, this is where there isn’t any difference between both devices. Both the entry-level C434 and Pixelbook Go comes with an eight-generation Intel Core M3 processor. It’s a decent processor and is capable of most tasks you would want to do on your Chromebook.

You can, of course, spend more on a higher spec model and both the Asus and Pixelbook Go offers i5 and i7 processors.

The difference in RAM really matters because you’re really going to notice the difference in performance between these two devices. The processor of both devices is identical, but the Pixelbook Go with double the amount of RAM is going to perform much better when using apps that require a lot of memory.

When it comes to storage both entry-level models offer 64GB. This is a pretty decent amount of storage for most, but you could easily run out if you’re looking at installing plenty of Android Apps.

Both entry-level devices offer a Full HD display with a resolution of 1,920 x 1,080. The Asus C434 offers a 14-inch display and offers beautiful thin bezels thanks to the NanoEdge technology. This means you’re getting a 14-inch display in a chassis not much bigger than 13-inches.

Both displays offer a touchscreen, which means you’ll be able to use Android Apps without any issues. However, the Pixelbook Go is not a Hybrid. Unlike the Asus C434, you cannot use the Pixelbook Go in tablet mode. You’re getting a laptop and nothing else.

This has been a big talking point about the Pixelbook Go. Everyone has got used to Chromebook devices being Hybrid. So it was a bit of shock when Google announced the Pixelbook Go can only be used as a laptop.

Whether this really matters depends on the individual. I’ve thought about this a lot and personally I do not see this as being a huge issue. Yes, it’s great that most Chromebooks come as a Hybrid. That being said, I can count on one hand the number of times I’ve used a Chromebook as a tablet.

One of the issues with the Asus C302 Chromebook was that it only supported two Type-C USB ports. Don’t get me wrong Type-C is the way forward when it comes to USB. However, when the Asus C302 was first launched a lot of us were still using peripherals that required the older USB ports.

The Asus Chromebooks since then went back to supporting the older USB port as well as Type-C. Some may have seen this as a backward step, but it does offer more options for connecting other devices to your Chromebook.

The question is whether now is the time for a Chromebook to only offer USB Type-C. It’s definitely now the established USB port for the future, so it may be the reason why the Google Pixelbook Go offers two Type-C ports. No older USB ports are offered, which may put some off. However, it’s worth remembering only offering Type-C has allowed Google to offer a much thinner device because of this.

The Asus C434 offers 10 hours of battery life. That’s pretty impressive when comparing to laptops running on other operating systems. However, Chromebooks are well known for having excellent battery life. This may explain how the Google Pixelbook Go can offer up to 12 hours, which makes it one of the best batteries from any Chromebook device.

This extra battery life will come in handy if using your Pixelbook Go on the go. Also, it takes just 20 minutes of charging to get a further 2 hours from the battery.

We’ve compared both the Asus C434 and the Google Pixelbook Go, so which is the best Chromebook? Well, that really does depend on what you see as important.

The price difference at the moment is roughly £80/$80 (as of October 2019) with the Pixelbook Go being the more expensive. That may be difficult for some to accept if you’re looking at it from what the Pixelbook Go does not offer compared to the Asus C434.

Yes, if you cannot get over the fact that the Pixelbook Go is a laptop only, then you may struggle to see the advantage. Also, there is the issue of not being able to expand the storage at a later date.

I personally feel most Hybrid devices feel unnatural in tablet mode, so I will not be put off by the Pixelbook Go being a laptop only. After all, it means Google has been able to offer a Pixelbook at a competitive price and a Hybrid device would have added to the weight.

This is one of the reasons why I would personally choose Pixelbook Go. It’s the fact that you’re getting a Chromebook that is extremely light to carry around with you.

As the name suggests, The Pixelbook Go is the perfect choice for anyone on the go. The Asus C434 may offer more functionality, but it fails when it comes to cutting-edge design and excellent portability.

For me, there is no hesitation. The Pixelbook Go is definitely the better choice.