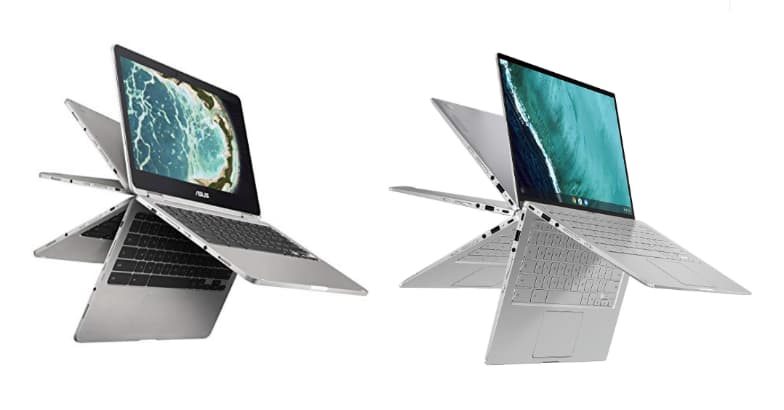 We all love the Asus C302 because it looks cool, works great as a hybrid and was the first Chromebook to work well with Android Apps. However, we were all desperately waiting for the Asus C434 to be launched and now it has we can finally see if it’s a worthy replacement.

The Asus C302 is a great looking laptop with its all over aluminium chassis and super thin dimensions. It really looks great whether it’s open or closed. When closed it looks like a slab of metal very similar to the Apple Mac Pro and the slight curved edges makes it nice to carry.

When it comes to needing a Chromebook that you can take out and about with you. The Asus C302 is definitely not going to let you down. This is thanks to it weighing in at just under 1.2kg and being just 13.7mm thick. The 360 hinge also makes it easy to flip from laptop to tablet.

The Asus C434 is also a very well built Chromebook. The 360 hinge works in the same way when you want to change from laptop to tablet. I would not say it looks as great when the lid is closed because it loses the pure aluminium slab look of the Asus C302. That being said it’s still a beautiful looking Chromebook.

Although the Asus C302 is lighter and thinner. The Asus C434 offers more when it comes to the display size. Considering you are going from a 12.5-inch to a 14-inch display, the slightly larger dimensions are nothing to be concerned about. Also, the Asus C434 does feel more sturdy even with the slightly curved edges at the front, which makes it lose the slab look of the Asus C302.

The Asus C302 comes with just one processor type, which is the Intel Dual-Core M3 Series processor. It’s a good processor with a speed of 0.99GHz but is capable of speeds up to 2.2GHz. It also comes with a 4MB cache to help speed up regular tasks.

It’s a fast Chromebook to use and it works perfectly well whether you are surfing the internet or using the latest Android Apps. It’s a 6th generation processor, so although it performs well it’s not the latest processor available by any means.

The Asus C434 has only recently been released so we would expect to see a better processor. There will be three models to choose from, but at present only the basic model is available to buy.

The basic model comes with an Intel Dual-Core M3 processor similar to the Asus C302. However, it’s the 8th generation processor, so it’s faster at 1.1GHz and capable of speeds up to 3.4GHz and comes with a 4MB cache.

The models not yet launched will offer Intel i5 and i7 processors, which will offer fantastic performance. However, you will also notice that the price of these models will be a lot more expensive.

Both the Asus C302 and C434 (basic model) offers 4GB of RAM. This is fine for most of the tasks you may perform, but it would have been nice to see 8GB of RAM on offer on the newer Asus C434. The Intel i5 and i7 models will be shipped with 8GB.

The Asus C434 wins when it comes to performance. This should not be a great surprise because it’s been a few years since the Asus C302 was launched. The basic model with the M3 processor offers great performance.

The Asus C302 comes with a 12.5-inch display capable of 1,920 x 1,080 resolution. This offers true HD and is good to see in a display of this size. It comes with an IPS panel, which creates vivid colours and a great viewing angle.

However, the slightly large bezels around the display do let down the look of the Asus C302 when open. Especially the bezel at the bottom of the display. Do not get me wrong. It’s not too bad, but it’s the only thing that makes the Asus C302 look a little cheap.

This cannot be said for the Asus C434. I absolutely love a laptop when it has super thin bezels. It just makes the laptop look so cool when it’s open. The Asus C434 with its NanoEdge display looks great.

Also, the NanoEdge technology is on all four sides of the display. This is really great to see because it just makes the Asus C434 look so cool and sophisticated. It’s not all about looks though. The thin bezels is one of the reasons why Asus was able to cram a full 14-inch display into a 13-inch chassis.

I did not even have to think for a second about this one. I absolutely love laptops with a super thin bezel, so for me the Asus C434 was always going to win when it come to the display. It also offers a 14-inch display compared to the 12.5-inch on offer from the Asus C302.

The only negative is the 14-inch display looks a tad too big when using it in tablet mode. Do not get me wrong some people might like using a 14-inch tablet, but it’s hardly a practical size for a tablet for most people.

The Asus C302 comes with 64GB of storage. At the time when the C302 was launched this was absolutely fine. However, since the launch of Android Apps, it could be a problem for some people. 64GB is still more than enough for the majority of Chromebook users.

However, when you consider Linux Apps is still being worked on it’s good to see the Asus C434 comes with 128GB of storage. We are still not there yet with Linux apps, but it’s good to know the extra memory is there for when the time comes.

In the meantime, having the extra storage will come in handy for anyone who likes to store lots of files locally on their Chromebook.

There is not much to say on this really. Nobody is ever going to complain about extra storage. The 128GB storage found on the basic model of the Asus C434 makes it future proof.

I absolutely love the keyboard on offer on the Asus C302. It’s definitely one of the best keyboards I had used on a Chromebook or any laptop for that matter. It’s great to see that Asus has stuck to the same design with the Asus C434. Both keyboards offer a great typing experience and both come with a backlit keyboard.

When I first got my hands on the Asus C302 I was really glad to see that they included the USB Type-C ports. Type-C is the way forward for USB connectivity, so at the time I was really pleased.

However, only the other day when I wanted to back up my data on my Asus C302 did I come across a problem. I wanted to change to the Canary Channel, so I could have a sneaky look at Chrome OS 76. It’s always advisable to backup local data before doing so, but soon realised I could not because all my external hard disks are USB Type-A.

This is the problem with the Asus C302. Although it was good Asus was looking forward when designing the Asus C302. It was perhaps a little premature to think it was ok not to provide a USB Type-A port. I ended up having to wipe my local data and ended up with another hardware issue after exploring the Canary Channel, which has wiped out my Asus C302 for now, but that’s a different story.

Asus obviously realise they were a tad too hasty with the C302 because the Asus C434 offers both Type-C and Type-A USB connectivity. I think this is a really smart move because updating all your peripherals to Type-C can be a costly task, which you would only want to do when necessary.

The Asus C434 offering both Type-A and Type-C USB connectivity gives it an obvious advantage to the Asus C302. The keyboard on both Chromebooks are fantastic to use, so neither win on the keyboard alone.

And the winner is, the Asus C434. I’m sure after reading this article that does not come as a great surprise. The Asus C302 was and still is a fantastic Chromebook. We were feeling nervous whether Asus could pull it off with the Asus C434 because it had big boots to fill.

I’m happy to see that they have not let us down with the Asus C434. Not only does it look great with its super thin bezels and all over aluminium build. It also offers great performance.

Yes, if you are looking for a Chromebook that is portable. Then you could argue the slight increase in weight may be a problem for some. However, you need to balance this out against the extra display size the Asus C434 offers.