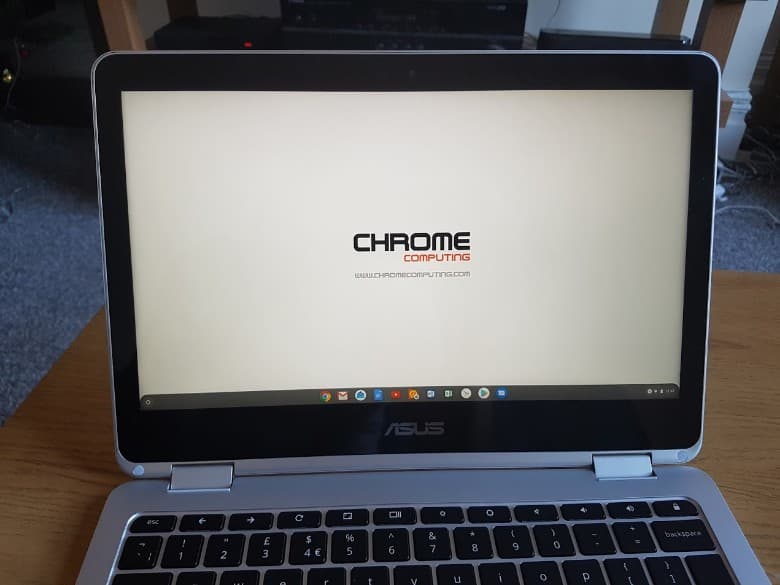 So let’s take a closer look at the Asus C302 to see what made it the best Chromebook to buy in 2018.

The first thing you’ll notice when you take the Asus C302 out of its packaging is just how cool it looks. An allover aluminium chassis means you get one sexy looking Chromebook. When the Asus C302 is closed it looks very similar in appearance to the Apple MacBook. It’s without question one of the best looking laptops around. Not just competing against other Chromebooks. The Asus C302 looks as good, if not better, than any other ultrabook on the market.

It weighs just 1.2kg, which is pretty light when you consider the solid build of the C302. It’s also good for anyone looking to use the Asus C302 as a tablet. After all, who wants to carry around a tablet that weighs you down? The Asus C302 is not only light, but it’s also super thin, which just adds to the look and feel of the Asus C302 Flip.

The fantastic build quality does not stop on the outside either. When you open the Asus C302 Chromebook you immediately realise you’ve got a quality laptop in your hands. This is what makes the C302 so appealing. Not only does it provide the best Chromebook experience practically, but it also provides the best in the looks department as well.

The Asus C302 Chromebook comes with an Intel Dual-Core M Series processor capable of 2.2GHz. This is a powerful processor for a Chromebook and you can immediately see this when using the C302. Not only does it boot up in seconds. It handles anything you throw at it with ease.

While using the Asus C302 I was installing a lot of Android Apps at the same time and the Asus C302 did not struggle with this at all. I was going from one Android App to another and it did not phase the C302 in the slightest. I did not notice any performance issues while it was downloading multiple Android Apps while installing Apps that had been downloaded.

The 4GB of memory that comes with the Asus C302 is more than enough for any of the tasks you may think of. Even some Android App Games that need a lot of processing power did not slow down when playing them on the Asus C302. This is great to see because the Asus C302 is definitely a great Chromebook for anyone wanting to take advantage of the thousands of Android Apps available.

Storage on the Asus C302

The Display on the Asus Chromebook Flip

The Asus Chromebook C302 Flip comes with a 12.5-inch screen and 1,920 x 1,080 display. This is really good to see in a Chromebook with a display of this size. The colours are vivid and the display offers crisp looking text. It’s also good to see that the display does not deteriorate if viewing from an angle.

This is really important when you consider you can use the Asus C302 as a laptop or a tablet. The Asus C302 display is fantastic and will definitely please anyone who uses it. Whether you’re using the C302 to write an essay or stream the latest movie you’ll not be disappointed with the results.

The amazing keyboard of the Asus C302

Simply put, the Asus C302 has one of the best keyboards I’ve ever used. I’m not just talking about comparing it to other Chromebooks. The keyboard is the second best keyboard you can get in the ultrabook market. The only laptop that provides a better keyboard is the Google Pixelbook.

First of all, the keyboard is backlit, which is great to see because it means you can use your Chromebook day or night without any issues. It’s also perfectly laid out and you have enough space between the keys to type. As a touch-typist of 60 words per minute, having a great keyboard is really important to me, so I am thrilled with the keyboard available on the Asus C302 Chromebook.

If you’re looking for a Chromebook that is good to use for essay writing then this is the Chromebook for you. The reason the keyboard on the Asus C302 is so nice to type with is that the keys travel 1.4mm on every push. You really feel this when using the Asus C302 keyboard and it makes typing on the Asus C302 an absolute pleasure.

The Connectivity available on the Asus C302 is without question forward thinking. Gone are the older USB ports, which are replaced by two USB Type-C ports. Type-C is the way forward and in a few years from now, all laptops will come with Type-C connectivity.

What makes Type-C 3.1 so good is the transfer speeds available, which is twice as fast as the older USB 3.0 connection. Also, there is no more fiddling around with USB connections trying to make sure you put the USB in the right way. This is because Type-C connections can be put in either way. This makes plugging in your connection to charge your Chromebook or plugging in an external Hard Disk much easier than if you were using an older version of USB connectivity.

It also comes with a Micro SD slot, so you can easily add further storage at a later stage. It’s unlikely you’ll ever need to do this because the 64GB of storage available is ample for most users. However, it’s good to see a Micro SD is available.

The sound you get from the Asus Chromebook Flip is ok, but you should not expect to get music reproduced in fantastic quality. That isn’t saying the Asus lacks in the sound department, as the volume provided is more than enough. It can sound a little tinny at high volumes though.

You can never really expect amazing sound from a laptop of this size when listening to music, so it would be harsh to mark the Asus down for this. For general use, the sound is just fine. If you do like your music then it’s best to use a decent pair of headphones in headphone jack provided.

The Asus C302 is the best Chromebook available in 2018. It beats the Pixelbook purely because of the price difference. You’re paying more than twice the amount for the Pixelbook. Don’t get me wrong the Pixelbook is a great Chromebook, but the C302 delivers everything you need at a much more affordable price.

It looks the part and is great to use as either a laptop or tablet. Using it as a tablet has got even better recently with the updates Google have made to Chrome OS. It’s also great to use in tent mode, which works perfectly if you’re sitting down on your sofa.

Whether you’re buying your first ever Chromebook or looking to update the one you already have. The Asus C302 is a must. Yes, if money is no object you may want to take a look at the Pixelbook. But seriously, the Asus C302 will not disappoint, as it performs and looks great.

The Asus C302 Chromebook is the one to beat in 2019. Until a better Chromebook comes along, this is without question the must-have Chromebook of 2018 and will continue to be in 2019.