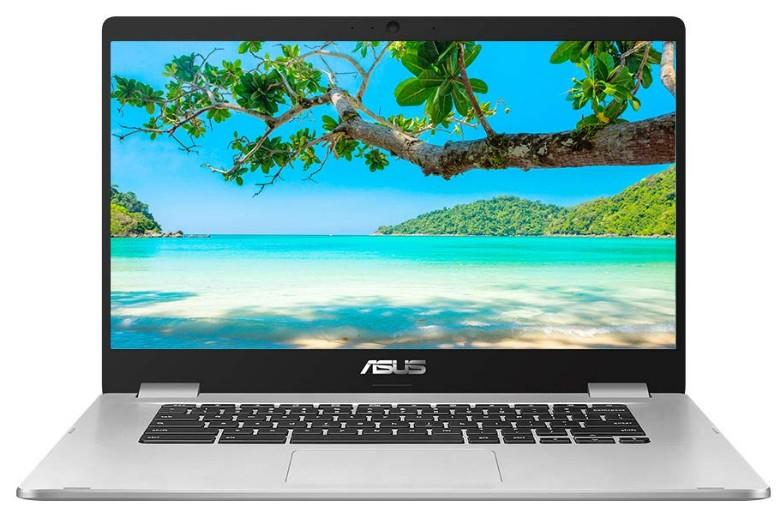 The great thing about the Asus C523 is that it was only launched in late 2018, so if you do decide to buy this Chromebook you’ll get Chrome OS updates until 2023. That alone makes the Asus C523 a great purchase if you’re after a decent Chromebook at a bargain price.

I really like the look of the Asus C523. The light grey plastic chassis is tough and will put up with the occasional knock along the way. It may be plastic but that doesn’t stop the C523 looking good. In fact, from a distance, it looks aluminium.

When you consider the size of the display at 15.6-inches the overall feel of the Chromebook is that it isn’t too big to carry around with you. This is great if you’re looking for a Chromebook to take out and about with you. The weight is also a surprise for a device with such a large display at 1.43kg, which is pretty light.

This is a laptop, so it will not be suitable for anyone looking for a Hybrid 2 in 1 device. It also does not support touch screen, which is something to consider if you want to use Android Apps.

However, the Asus C523 makes up for not being a touchscreen when it comes to the keyboard. If you’re looking for a Chromebook to write essays with then this is a perfect choice. The keyboard works perfectly well and you’ll not get that fatigued feeling after typing for a long time like you can get on other budget Chromebooks.

The Asus C523 comes with an Intel Celeron processor, which is capable of reaching speeds of 2.40GHz and as base speed of 1.10GHz. This makes the C523 perfect for anyone looking for a Chromebook to surf the internet, stream videos or to do some word processing with.

You’ll have no problems using the Asus C523 for everyday use as the processor is made for this type of work. It will also comfortably work with Android Apps, which are supported by the device. Most of the Android Apps available will work with the Asus C523 without any issues at all. Just remember, it does not have a touch screen display, which may make some Android Apps difficult to use.

You do need to accept that this is a budget Chromebook, so you should not expect the Asus C523 to cope with more demanding Android Apps such as 3D games. It will also slow down if you end up having many windows open at the same time, so it’s not ideal for multi-tasking.

That being said, for day to day internet surfing and video streaming the processor is more than capable of doing the job.

It comes with 4GB of RAM, which is good to see in a Chromebook in this price range. This amount of memory will mean you should not come across any problems in performance for daily tasks.

It also means you’ll really notice the difference in performance if you’ve previously been using a Chromebook with just 2GB of RAM.

The storage available is also impressive for a budget Chromebook. It comes with 64GB, so you will have no problems storing plenty of files locally and installing your favourite Android Apps.

The C523 comes with a huge 15.6-inch display making it ideal if you’re looking for a Chromebook with a large display. It also comes with Asus Nano-Edge technology, which means it has amazing super slim bezels around the screen. However, if the display is too big then take a look at the Asus C423 Chromebook that comes with a 14-inch display.

These super slim bezels remove the need of huge plastic borders around the screen. This makes the Asus C523 look a lot more expensive than it actually is. It also means it’s much cooler to look at than a display with huge plastic bezels, which can make a device look cheap.

However, the display on offer is not fantastic and is something definitely worth considering before buying this Chromebook. It only supports 1,366 by 768 resolution, so you do not get true HD. Generally speaking, this would not be a problem when reviewing a budget Chromebook. This is because there are many budget Chromebooks with the same resolution.

The problem is that a resolution of 1,366 by 768 is really noticeable on such a large display of 15.6-inches. This is a big problem and isn’t helped by the lack of an IPS panel.

You’ll be happy with the connectivity on offer here. The Asus C523 comes with two USB Type-C ports, which makes the Asus C523 future proof. It also comes with 1 older USB type port if you have not yet got around to upgrading your peripherals.

It also comes with a headphone jack should you wish to plug in a decent pair of headphones. If you are worried about running out of storage space there is no need. The Asus C523 comes with a MicroSD slot making adding new storage an easy option at a later date.

If you’re after a Chromebook with a large display but don’t want to spend too much money then this may be the Chromebook for you. It looks good, so you will not be embarrassed to take it out and about with you.

It’s perfect for internet surfing and students who need to write essays. The memory and storage on offer are good for the price range and the keyboard will also not let you down.

However, if the display is important then you may not be happy with what’s on offer. The resolution is just too small for a 15.6-inch display. It also lacks an IPS panel which means viewing the display at an angle is difficult. If the display is not an important factor, well, you may have found the bargain Chromebook right for you.