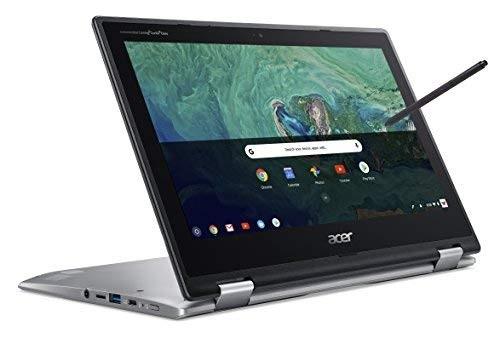 If you are looking for a good all-round relatively cheap priced Chromebook then the Acer Spin 11 might be the choice for you.

It’s a hybrid Chromebook, so you can use it as a laptop or a tablet thanks to the 360 degrees hinge. It weighs 1.35kg, which is a little heavier than you might expect for the size. The dimensions of the Acer Spin 11 at 29.59 x 20.59 x 20.07cm is another reason why this Chromebook is perfect for anyone looking for a laptop to use out and about.

It also comes with a stylus included in the price, which is great to see from a Chromebook in the budget-priced arena.

The Acer Spin 11 comes with an Intel Celeron N3450 processor with a base speed of 1.10GHz and a max speed of 2.20GHz. Nearly all of the Chromebooks in the budget category use a similar processor. It works perfectly well for anyone who is looking for a Chromebook to surf the internet or to watch the occasional movie.

It’s also perfect for anyone who needs to use work applications such as a word processor or spreadsheet. This makes it a great choice for the education market. If your child needs a Chromebook then this is a perfect choice, as the build quality means it will stand up to even the hardest of knocks.

It’s also good to see that the Acer Spin 11 is capable of running Android Apps. Using Android Apps works perfectly fine but you do see a little lag when using more advanced Android Apps. However, that is to be expected because the processor is not made with performance in mind.

If you like to multi-task then you should be prepared for a little slow down in performance. The Acer Spin 11 is perfectly fine for day to day tasks. Just don’t expect it to perform at lightning speeds when using more advanced Android Apps or multi-tasking.

The amount of RAM at 4GB is pretty decent for a budget Chromebook. This amount of RAM means you will have no problems when internet surfing, video streaming or working on your latest novel.

It’s also ideal for anyone who wants to use Android Apps. At the moment, this amount of memory can cope with most of the Android Apps currently available.

The 32GB of storage is perfectly acceptable in the price bracket. The problem with Chromebooks, or should I say the great thing about Chromebooks is the ability to now use Android Apps. However, this does mean Chromebooks now need more memory. The good thing is the Acer Spin 11 comes with a MicroSD slot, so you can easily add further storage at a later date.

The storage on offer means you can easily install a few Android Apps without any problems. You should not expect to be able to install hundreds of Apps though, as the storage will soon fill up.

The Chromebook comes with an 11.6-inch display and is capable of a resolution of 1,366 x 768. When you consider the price and the size of the screen the resolution is perfectly acceptable. Everyone would love a true HD display resolution of 1920 x 1080 but in this price range on a display under 12-inches. That simply is not possible.

The display is fine to use and the stylus works well for the creative type out there. It’s not the brightest display in the world. Comparing it to other budget Chromebooks, however, there is not too much to worry about here.

It’s also good that they have decided to keep two older type USB ports, which means you will have no problems using older peripherals with this Chromebook.

Anyone who would like to add extra storage can do so because it also comes with a MicroSD slot. This makes adding extra storage at a later date a simple solution.

The Acer Spin 11 Chromebook is a perfect little laptop for anyone who needs a device on the move. Its 11.6-inch display means you can easily take it out with you without too much of an issue.

It’s also a really sturdy Chromebook, so you will not need to worry if it gets the occasional knock when you are on the move. It’s perfect for children as well, so you may want to consider this for anyone in your family who are still at school.

The included stylus is really great to see. That with the 2 in 1 functionality makes the Acer Spin 11 a truly great all-rounder.