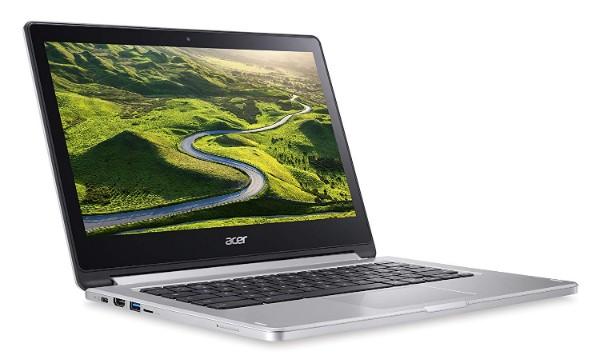 There aren’t many budget Chromebooks that get my attention because unfortunately a lot of them lack something. This was never the case with the Acer R13 when it was originally launched because it had everything you’d want from a budget laptop. Sure, it’s a couple of years old now, so you need to remember it has an AUE date of June 2024. Putting all that to one side this is still a fantastic budget Chromebook. The good news is you can currently get one of these from the Amazon Renewed program if you live in the USA.

What makes this a great budget laptop is the build quality is excellent. The outer casing is made of aluminium and it has a nice slab look but with curved edges to make it comfortable to hold. It’s a Hybrid Chromebook, so it can be used as a tablet, which also means it comes with a touchscreen display. When you consider this laptop has been around for a couple of years. It amazes me that in terms of build quality and specs it beats models released at a later date.

THE ACER R13 HAS A GREAT DISPLAY

Another great thing is the fantastic display. There is nothing budget about this display. Instead of the standard 14-inch, you’re getting a 13.3-inch display. I much prefer a smaller display over 14-inch models because they are easier to carry around. Usually, when you buy a budget Chromebook where the display is under 14-inches you’d be looking at SD resolution. The Acer R13 offers Full HD resolution of 1,920 by 1,080.

What also makes the display great is the IPS panel which is used. This not only makes sure the quality of the image does not deteriorate when viewed at an angle. An IPS panel also makes the colours and images on the screen more vibrant.

Unlike most budget devices, which tend to use an Intel Celeron processor. The Acer R13 uses a MediaTek dual-core processor. Capable of speeds of up to 2.10 GHz this laptop can easily perform regular tasks such as internet surfing, streaming video and using social media.

The 4GB of RAM is all you need for a budget laptop, so nothing to worry about on that front. The storage at 32GB is a little low, but when it was originally released that would have been perfectly acceptable. You can still easily use a Chromebook today with 32GB of storage. You’d just have to manage your storage more if you like to install plenty of apps. Find out five ways to free up storage space on your Chromebook.

It also comes with a Micro SD slot, so you can easily add storage at a later date. However, it’s important to remember any extra storage added with a Micro SD card is for files only. You cannot store Android apps onto an SD card. Adding an SD card means you can save all the 32GB of local storage for Android Apps. So even though you cannot use the additional storage for apps. You can use it for everything else to save your local storage to install further Android apps.

This is one of those Chromebooks, which the manufacturer put a lot of thought into. If you’re on the lookout for a budget Chromebook with good quality specs. Then you can’t really go wrong with the Acer R13 Chromebook.