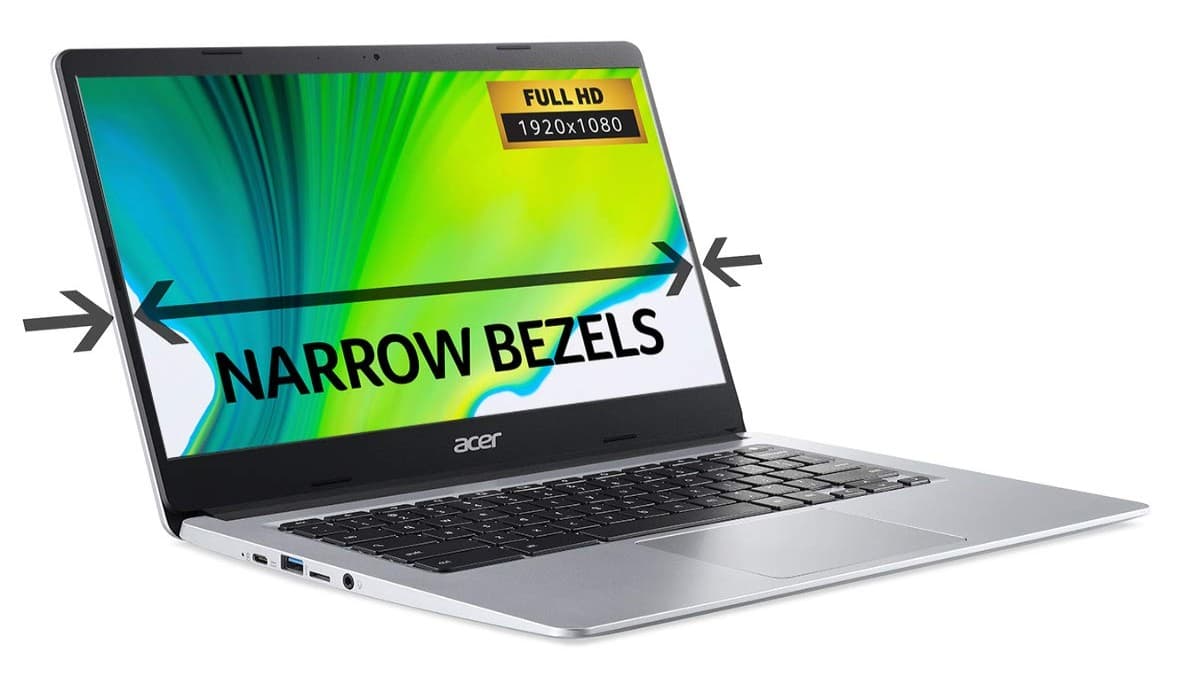 Acer is a very well known brand and have been making computers since I can remember. In fact, even before I was born, so I think we can safely say they know what they are doing.

They’ve also managed to carve themselves a nice little slice of the Chromebook market. They make some cracking Chromebook laptops to suit all budgets.

Whether you’re after a high-spec model like the Acer Spin 713, which replaced the Acer Spin 13 or a budget Chromebook like the magnificent Acer CB514-1HT. You’ll find Acer makes some rather fantastic laptops for Chrome OS.

The only criticism is it can be a little confusing trying to work out the model numbers. For example, the Acer 314, which I’m about to review here. Is available in both non-touchscreen and touchscreen versions. However, if you didn’t do your homework, you may not even realise this.

There is no need to worry though because this will all be covered in this review. So let’s get on with it and see if they have done it again in this Acer CB314 Chromebook review.

The Acer Chromebook looks like a typical laptop, which is not a bad thing. Gone are the days where you had to deal with cheap budget Chromebooks.

The casing of the laptop is plastic, which is exactly what you’d expect from a budget price Chromebook. More expensive Chromebooks are usually aluminium, but I really wouldn’t let that put you off at this price. It’s still a well built sturdy laptop.

It’s a laptop only, so it does not have 2-in-1 capabilities. What I mean by this is you cannot also use it as a tablet. For a long time, I’ve questioned whether 2-in-1 Chromebooks are that important. I know a lot of people like them, but personally speaking. All you need is a touchscreen if you’re going to use it for Android apps. Being able to use as a tablet isn’t so important.

It weighs in at 1.7kg/3.75lbs and is just over 19mm thick. So it’s not the slimmest laptop available, but it certainly isn’t a huge beast either. You’ll be able to easily carry this around with you without any issues. It has nice curved edges, which makes it comfortable to hold in your hands when travelling.

Acer has done a great job on providing a laptop, which is not only portable it looks like any other decently built laptop. It’s also fanless as well, which is one of the benefits of a Chromebook that does not come with a super-powerful processor.

It comes with an Intel Celeron N4000 processor, so it is classed as a budget Chromebook. However, it can still carry out nearly all of the tasks most people would want to do on a laptop.

It comes with a base speed of 1.1 GHz and a turbo speed of 2.6 GHz, which is pretty good to see. Also, the Dual-core processor comes with a 4MB cache, which makes tasks your processor performs on a regular basis amazingly quick.

Whether you’re internet surfing, streaming HD movies, using spreadsheets or a word processor. The Acer 314 can handle all these tasks with ease. Let’s face it this covers most of the tasks we need from a laptop.

You can now use Android apps on Chrome OS. This is great because it makes them a lot more versatile than they once were. You’ll easily be able to use most of the Android apps with the Acer 314 without a problem. Really advanced Android apps such as games with advanced graphics may run a little slower than a higher spec device.

The RAM you get with the Acer 314 of 4GB is more than enough for a Chromebook. This amount of RAM with the processor used will work absolutely fine.

Multi-tasking will be fine to some extent. However, if you start to open lots of windows all at one time. Then you will notice the processor and amount of RAM will struggle a little bit. You’d expect nothing else from a budget laptop, so I wouldn’t see this as a criticism. Just accept a budget Chromebook isn’t made for having 15 + windows open at the same time.

When it comes to the storage you get 32GB on the basic model. This is fine for some of us, but it would have been nice to see a bit more. That being said, this is for the non-touchscreen model. However, a non-touchscreen model is available with 64GB at a slightly higher price.

PLEASE NOTE: A 64GB storage model is available without a touchscreen. The only touchscreen I could find at present is from Curry’s PC world, but it’s in-store collection only.

Chromebooks are cloud computers, so you can store most of your data with Google Drive seamlessly. Your local storage should be reserved for Android apps, which do install locally. So if you’re not installing too many apps you’ll be fine with this amount of storage.

If you opt for the touchscreen model you get the same amount of RAM, which is fine. The good thing is you get double the storage at 64GB. This makes perfect sense because the touch-screen model is aimed at people wanting to install a lot of Android apps.

I’m a true believer for anyone to love their laptop they’ve got to fall in love with the display. This is a problem for a lot of budget laptops. A poor display is horrible to use and the viewing angles are awful.

Well, there is no need to worry, as the Acer 314 Chromebook comes with a great display. In fact, for the price, I’m pretty shocked at how good the display is.

The IPS panel means you’re going to get great viewing angles and the images and text look more alive. You’ll definitely not be disappointed with the Acer 314 display. It’s simply fantastic and is what you’d expect to see in mid-range devices costing a few hundred more.

It comes with nice thin bezels as well around the sides and the top. I love thin bezels because it makes a laptop look a lot more expensive. Also, huge bezels around the display simply look ugly.

You’ll be happy with the ports offered by the Acer 314 Chromebook. You get the newer type USB – C, which is definitely the future. One located on either side of the laptop, which makes it easy to charge your device no matter where the plug socket is located.

The USB C ports are not only used for charging either. You can also use them to connect an external display to your Chromebook.

Although USB C ports are great. It can be a problem for people who have older hardware they want to attach. If you’ve got a mouse or hard disk you want to connect. It can be a problem if they use the older USB type port. The good news is Acer has this covered because they also provide two older type USB ports on the Acer 314.

The headphone/mic jack means you can easily add some wired headphones, which is probably a good idea. This is because laptops, in general, are not known for offering great sound.

The Acer 314 is a great budget Chromebook. In fact, I’d go as far as to say it’s simply fantastic.

When it comes to buying a budget Chromebook you normally have to deal with compromises. This is usually with accepting a poor quality display. Well, the display is amazingly fantastic when you consider the price.

Chromebooks from the mid-range sector costing double the price usually come with a display like this. This for me makes the Acer 314 a perfect budget laptop.

The only thing you do need to remember is the touchscreen. If Android apps are something you’re interested in then I’d opt for the touchscreen model. However, if you are not too fussed about Android apps and will only use them now and again. You could just get the standard model and save yourself some money.

Overall, The Acer 314 Chromebook is possibly the best budget Chromebook you can buy right now. It’s available at incredibly cheap prices and is perfect for everyday tasks.